“American Sniper” A Hit with Americans, so why are Hollywood Libs Fuming? 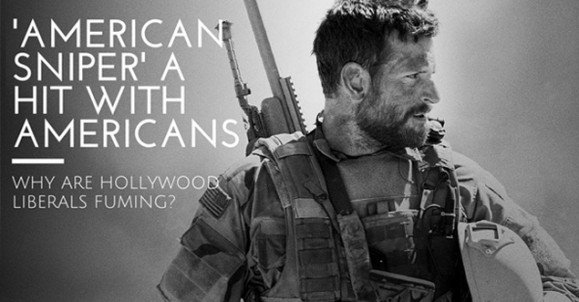 “American Sniper” A Hit with Americans, so why are Hollywood Libs Fuming?

There was a tsunami at the box-office this past weekend with the opening of the Clint Eastwood movie “American Sniper”.  It was evident to Warner Bros. and most of Hollywood that this movie was going to have a blockbuster opening unlike anything that they had seen or expected.  Indeed on Friday, the film played to packed theaters and brought in receipts of over $30 million dollars its first day.  By the end of the holiday weekend, the movie had reached over $100 million dollars in revenue.  You would think that Hollywood would be doing cartwheels over the great news.  Not so fast.

This was a double-edged sword for Hollywood and the liberal elites.  On one hand, they are delighted over the fact that this film could eventually be a billion dollar mega-hit, but on the other hand, they are gritting their teeth because it goes against everything that their liberal minds believe; God, guns, and America as the “good guy”.  How can that be? According to Dan Fellman of Warner Bros, Middle America made a major difference.  “It played great everywhere, in the big cities, in suburbs and red and blue states.  If you look at the top 20 locales you see places like Texas, Oklahoma, and Albuquerque, which don’t normally turn out for R-rated films.  It played like a superhero movie in places like Dallas, but this time the superhero was real, and that was what mattered.”

This happened recently in 2004 with the enormous success of Mel Gibson’s “Passion of the Christ”.  That film blindsided Hollywood as well when it scored huge audiences and box-office receipts of over $600 million dollars.  At the time, it was the highest grossing R-rated film ever.  The Hollywood elites couldn’t wrap their heads around the fact that a film about Jesus and religion could garner such success.  They still consider it some sort of fluke.

I write about this very subject in my new book, “What Women Really Want”, which I co-authored with Ann-Marie Murrell and Dr. Gina Loudon.  I explain how the “new” Hollywood, since the 1960’s, just doesn’t “get” the American people.  They are constantly puzzled, confused and often flabbergasted over the fact that the average, hardworking, God-fearing, patriotic citizen of this country does not walk in lock-step with the far-left liberal agenda.  They want you to believe that all Americans think like the progressives, but that couldn’t be farther from the truth.

So Clint Eastwood makes a brilliant, fast-paced, accurate film about U.S. Navy Seal Chris Kyle that tells the truth about what our military is up against in battle and also what they face upon returning home.  Bradley Cooper becomes Chris Kyle in an amazing performance and it is no wonder that the film is nominated for six Academy Awards.  The critics praised it and Hollywood grudgingly had to admit that yes, it is deserving of nominations because it is virtually flawless.  One glaring omission is the snub of director Clint Eastwood without whom this film would not exist.  Hollywood just couldn’t bring itself to honor with a nomination a man who blatantly supported Mitt Romney and had a conversation with an empty chair representing Obama.  They had to twist the knife somewhere.

With the incredible news of the film’s success, the left is coming out of the woodwork to try and take it down.  Michael Moore who is no longer even relevant just had to bash our military snipers and demonize them.

Hollywood and the leftist elitists just don’t want to recognize that they in fact are in the minority in this country.  They panic when films like “American Sniper”, “Passion”, “Captain America”, or others like them capture the heart and soul of Americans.  They also continue to be amazed that countries around the world go and see these films as well because they resonate with people.

Unfortunately, the progressives will do whatever they can to push their agenda and bash conservative values. They will say whatever they have to in order to tear down or twist the message.  That is what they do, and patriots like Chris Kyle have made it possible for them to be free to speak their message.

Thank goodness for “American Sniper”, it has come at the right time and hopefully it will ignite a fire in the hearts of all who see it to better understand what our military deals with and how honored we are that they have our backs.

Editor’s note: Morgan Brittany is a friend of MOVIEGUIDE(r) and been an actress for over 55 years. She has moved into the conservative political realm and is a commentator for programs on “FOX news”, “The Rick Amato Show” on “One America Network”, and CNBC.  Morgan is co-author of a new book, What Women Really Want which celebrates faith, family and freedom, and is a columnist for “World Net Daily”, “Town Hall Finance” and a web site that I own and share with my fellow authors; “PolitiChicks.com“. This article is reprinted by permission. For Morgan’s book, please go to: http://www.amazon.com/What-Women-Really-Morgan-Brittany/dp/1938067142