Fighting Against the Sex Trade 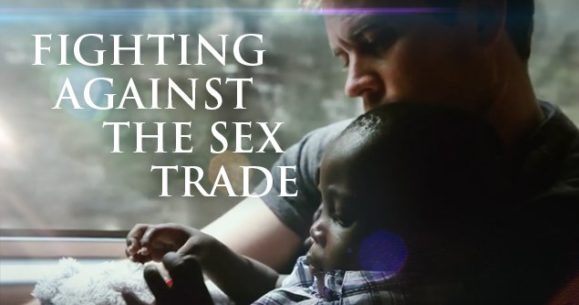 Behind the Scenes of THE ABOLITIONISTS
By Evy Baehr, Executive Managing Editor

Most people may not realize that slavery is a current problem, with 27 million people enslaved in human trafficking right now, two million of which are just children.

The documentary THE ABOLITIONISTS follows the journey of a few men who go undercover, around the world, to save children. On Tuesday, May 16, THE ABOLITIONISTS will be a Fathom Event you will want to know more about. Unlike most movies, the filmmakers are giving “15 percent back to Abolitionist to continue rescuing kids.”

Director Darrin Fletcher and Chet Thomas met former CIA and Homeland Security operative Tim Ballard, who is the one that literally goes undercover to save the children. Darrin and Chet were used to working on dramatic movies like THE SANDLOT, MINORITY REPORT and HIGH SCHOOL MUSICAL 2, but, when Darrin and Chet met Tim, their hearts broke.

“When you start to hear these stories about kids, it just broke our hearts,” Darrin says. “We decided that, whatever we do, we’re going to do something about this problem, and that’s where it all started.”

From that moment, Darrin and Chet knew they had to make a movie about what was going on in the world of human trafficking.

“We have been in the business of theatrical films for 25 years,” Darrin noted, and “never had made a documentary. So, this is our very first documentary.”

They started the new project by filming every undercover mission that Tim was doing. In order to do that, they said, “Let’s manufacture a series of different cameras, and everybody will be wearing a camera.”

“When we leave our offices for an operation,” Darrin said, “we tend to be carrying somewhere between ten to 45 cameras. That way we can tell the story.”

Add Darrin: “One goal we had was to bring something new to the documentary category. You won’t find in our movie stale, sit down, beautifully lit interviews with professionals. I wanted to grab the audience, [to tell the] you’re going with me on this journey. So, we never really let go of the audience.”

Darrin hopes people who see the movie will remember it and do something about sex trafficking.

“A film comes and goes, and people forget about it,” Darrin noted. “Our goal is to light a fire that stays.

“I’m hoping that this film. . . inspires people,” Darrin continued, “that it removes remove them from sitting on the fence, [that] it pushes them. So that [they] stand back up and say. ‘Oh my goodness, I had no idea that this was happening. I also will not stand idly by while this happens to children around the world.’”

Tickets are now available to see THE ABOLITIONISTS on Tuesday night, May 16. The movie is about mature subject matter, so caution is advised.