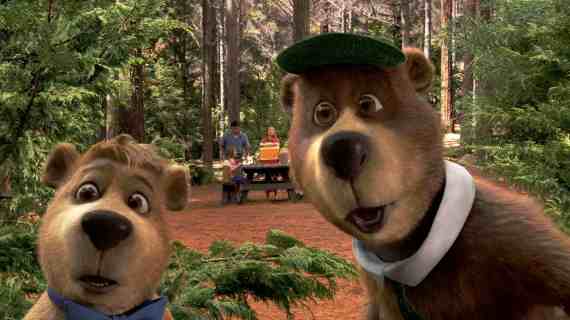 Dan Aykroyd and Justin Timberlake were in Los Angeles the other day to discuss doing the iconic voices for Yogi Bear and Boo Boo in the new 20th Century Fox movie YOGI BEAR.

“We had two or three sessions together,” Justin explained, “because we


really did think of this as a Batman and Robin duo. It really made a difference that Dan and I got to work together. It was our job to find out what we thought was funny and arc the characters through the scene and their relationship. We found so many things that we thought were funny.

“It was a very cool collaboration,” he concluded. “We had a lot of fun doing it.”

Aykroyd said, “The characters are long established in American culture from the 1960s. They were well written and well drawn. They had a lot of heart and a lot of sweetness and that made them endure.”

“We were honored to pay attribute to [these] multigenerational characters,” Timberlake said. “At the same time, we were encouraged to give them a new spirit.”

“We both took refuge in the characters,” Aykroyd added.

The cast, director and writers were asked what messages they wanted their YOGI BEAR movie to send to children.

“Put up the texting, turn off the Blackberry, put up the laptop,” Aykroyd said. “Get rid of it for at least a long weekend; four or five days once or twice a month.”

He added, “We are ruining the attention span of this generation. It’s time to get out and see that there are other creatures out there other than our friends being texted and sexted.”

Aykroyd grew up on the edge of a national park in Canada. Ironically, Timberlake said he grew up near a state park in Tennessee. In the movie, Jellystone Park is in danger of closing down, and Yogi and Boo Boo have to help Ranger Smith keep the park open.

Both Timberlake and Aykroyd said they grew up with the characters in YOGI BEAR, even though they don’t belong to the same generation. In fact, both would come home from school to watch Yogi Bear and Boo Boo on the television.

Timberlake said he learned how to sing by imitating other singers on the radio, including Michael Jackson, Al Green and Don Henley.

“I would entertain my parents by imitating Scooby Doo and Boo Boo,” he added.

Writer Brad Copeland said, “At the time I was writing this, they were shutting down parks in California and literally talking about selling national parks back to the federal government. These national parks are really special. If we lose them, we don’t get them back. They need to survive.”

Aykroyd said, “The original Hanna Barbara cartoons always had a little message at the end, helping friends and staying together. There was always that kind of little twist to the writing, a little moral or social or ethical message.

“That’s why I grew up the way I did. It was from the cartoons, not so much from the Bible [though] I read the Bible too.”

Director Eric Brevig said, “We were brave or foolhardy enough to go out into the real wilderness [in New Zealand] with prototypical, state-of-the-art digital 3-D cameras and shoot a movie with no restraint, as if it were any other film.

“It’s probably the most technically complex movie to date, and I don’t think you think twice about [the technology] if you see the film.”

Though Aykroyd and Timberlake didn’t get to go to New Zealand to film, their co-stars, Tom Cavanaugh and Anna Faris, did.

“It was just a joy and a privilege to be outside in this stunning wilderness, and the aesthetic of it all, every day,” Cavanaugh said.

“I felt so fortunate we were able to be in New Zealand and film these gorgeous landscapes,” Faris said. “It gives a lushness and legitimacy to the film.”