Which Is Better? Great Seats or Great Movies? 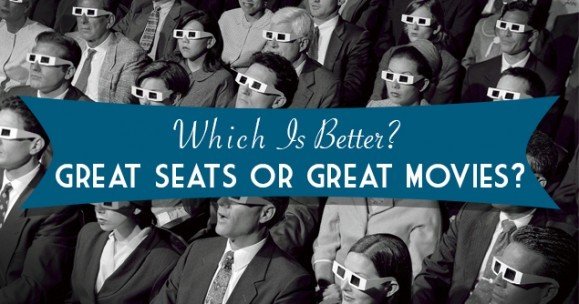 Which Is Better? Great Seats or Great Movies?

AMC Theaters is spending $600 million to upgrade a number of theaters to large recliner seats with wide rows. Up to two thirds of an auditorium’s seats can be removed to fit the recliners.

I recently saw a movie in one of these theaters where the seating is reserved. You picked which recliner you wanted before entering the theater. AMC plans to raise prices in the theaters with deluxe seating next year.

Another modern approach is the Studio Movie Grill. It combines the movie and restaurant experience. We have one of these in Atlanta, and it’s a very nice modern facility, but as a movie purist, it’s disturbing to try to find your credit card and sign a receipt for your food in the middle of a movie. You get to figure out how much tip to leave in the dark. The theater appears to be doing a good business, but it offers Groupon deals on an almost constant basis reducing the price of a movie ticket. You get to make up for it on your meal.

The problem with these new approaches, as with 3D, is that you still need good movies. Theater chains are at the mercy of the studios. If audiences aren’t interested in the movies being made, they won’t pay $12 to come sit for two hours in a very nice recliner and they won’t pay extra to eat a meal in the dark.

This summer’s box office slump is not because the seats are uncomfortable. It’s because the movies are not that attractive. Could it be audiences have seen enough cities destroyed by aliens and super villains?

When STAR WARS came out, people were so astounded by the exciting story and the tremendous special effects. Many people paid to see the movie multiple times. Guess what? The thrill is gone. What else can you do with CGI to be truly new and different?

As MOVIEGUIDE® Founder and Publisher Dr. ted Baehr says, the key to success in movies is a great story well told, with wholesome, morally uplifting values and a positive worldview full of faith. More than lounge chairs and gourmet meals, theaters need some movies with inspiring stories and appealing characters audiences can love. They need movies that touch the heart and inspire. They need movies that aren’t marred by vulgarity and crass behavior. They need classics that will be popular 50 years from now.