Bringing THE GIVER to the Big Screen 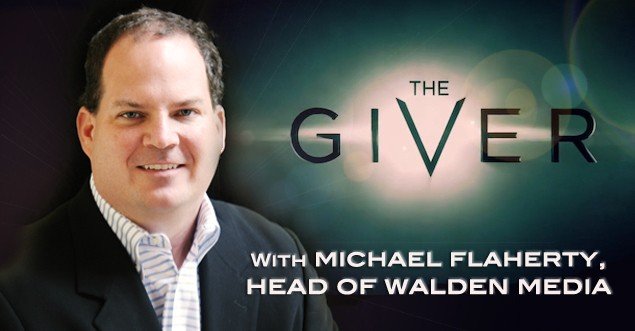 Bringing THE GIVER to the Big Screen

By Evy Baehr of MOVIEGUIDE®

Walden Media is known for bring beloved books to the big screen, including Movieguide® favorites like “Chronicles of Narnia”, “Bridge to Terabithia” and many others. This time, Walden is giving us the widely successful book, THE GIVER.  Movieguide® had the opportunity to speak with the head of Walden, Micheal Flaherty.

MOVIEGUIDE(r): How was it working with Harvey Weinstein?

Micheal Flaherty: Because we got to work on this we got in all these fun discussions, about God, politics. Really loved working with him. He loves ideas, loves talking about them and is always willing to listen…

MOVIEGUIDE(r): When did Walden get involved?

Micheal Flaherty: [It was] The first book we … optioned. In 2001, we optioned it…. We weren’t able to crack the code, and, the next time the option expired, Warner Brothers snapped it up in 20 seconds. Then,…it came back, which was awesome.

MOVIEGUIDE(r): Why did the book take awhile to get going as a movie?

Micheal Flaherty: All these other books were coming out later, HUNGER GAMES, it’s almost as if people were waiting to say those movies work, then we will do this movie…. It’s Biblical right: the first shall be last.

MOVIEGUIDE(r): What do you think the Christian community can get out of it?

Micheal Flaherty: That’s where I have huge, huge hopes. I always wanted to make something that transcended religion and transcended politics, but talked about what kind of people we want to be, and who was in control. It’s very clear, when you see the movie, that for a government to have control, you have to convince people that there is no higher authority than them. The only way to do that is to get rid of every trace of scripture, music, anything that glorifies God has to be gone, and then the one word description for the Gospel is Love. SO they really had to fight that idea. The love that is shown is…it’s all sacrificial.

we have to make sure that all life is sacred. On both ends too, euthanasia…

MOVIEGUIDE(r): What about including silent night in the movie?

Micheal Flaherty: This is so perfect because, He’s holding a baby that the government wanted to kill, and he’s finally made his way to safety, and the very first song he hears should tell you a lot about the difference between the free world and the community. It’s about our Lord and Savior who brought us freedom.