Bringing Science Fiction Back into the Daylight 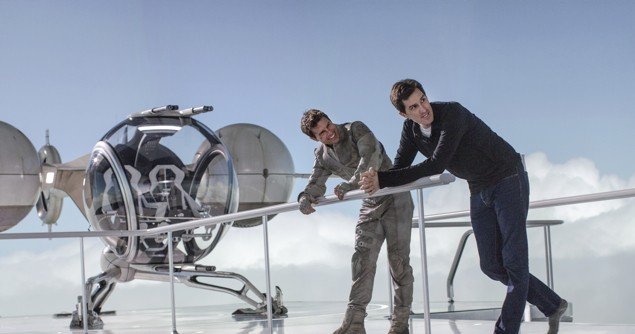 Bringing Science Fiction Back into the Daylight:

Behind the Scenes of OBLIVION with the Director

OBLIVION is an interesting science fiction film that even director Joseph Kosinski admits shows a story of redemption. Movieguide® had the opportunity to get some insights from Kosinski on just what type of movie he wanted to make.

“I wasn’t interested in making a hyper violent film,” Kosinski said. “This film at its core is a very hopeful film, and one that I wanted people who even normally wouldn’t go to sci fi adventure films. I wanted it to have a heart and a core to it or a message that would appeal to them as well. In the end, I got to make exactly the type of movie I wanted to make.”

Kosinski noted that recent science fiction movies have taken a darker side, “a very dark place of deep space and dark ships.”

“I liked the idea of bringing science fiction back into the daylight,” he said. “So, for me, that felt like something we hadn’t seen in awhile. The juxtaposition of the world we know set against the landscape of Iceland to me was an exciting depiction of the earth’s surface. We’ve seen so many dusty, gray, green, brown post apocalyptic worlds it would be fun to see something with some sort of color and daylight and brightness, in this world above the clouds. That to me as an aesthetic is really exciting.”

With the help of Claudio Miranda, this is exactly the effect the movie had, with beautiful modern architecture in pure white.

“Some of the experiences I had in this movie,” Kosinski continued, “shooting on a mountain top in Iceland and working with Tom (Cruise) and seeing him and Morgan (Freeman) together, were just spectacular. Kind of like what I always dreamed filmmaking would be like. Seeing LAWRENCE OF ARABIA as a kid, I got to experience that in Iceland on this movie, which was fantastic.”

Walking out of the movie theater, viewers will have questions about OBLIVION, which is exactly what Kosinski wants.

“I always love movies that ask big questions but don’t necessarily answer everything,” he explained. “I like people walking out thinking about something. I wanted this to be a movie that people talk about, debate, argue over and discuss, and think about a couple days later. Hopefully, great science fiction films help you think about issues that relate to yourself. . . whether it’s what’s my purpose? Why am I here? What is it that makes me who I am? Those kind of questions, my favorite science fiction films ask. Hopefully, OBLIVION’s a movie that people walk away talking about.”