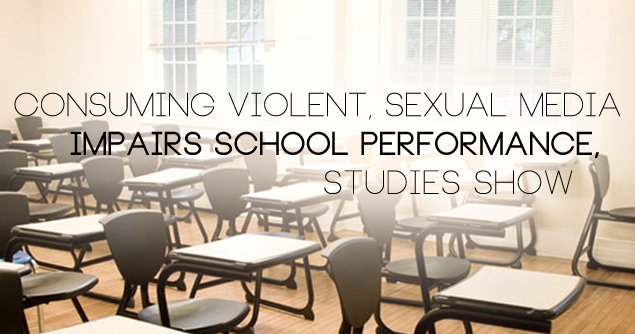 Numerous studies suggest that exposure to sex and violence in the media impairs attention and memory, two of the most important human abilities involved in education.

A 2015 international study of Turkish students by Ohio State University in the USA and Faith University in Turkey shows that acquisition of a foreign language is significantly impaired after a student views a video depicting sex and violence.

Students exposed to sex and violence performed worse on a post-test and on a delayed test one week later.

“An important implication of our findings for pediatricians, parents, teachers, and researchers is that exposure to violent and sexual media impairs adolescent school performance and foreign language memory. This is concerning because violent and sexual media are readily available to children, and foreign language proficiency is a crucial skill in a globally connected society.”

Heavy exposure to violent, sexual images can cause addiction. Addictions become profoundly distracting. At school, at work, or anywhere, an addict can become highly distracted by hunger to satisfy their addiction. It’s hard to focus the mind on calculus when the brain is screaming for more pornography or more ultra-violence.

The body has a physical and obvious reaction to what you feed it. The standard American diet is causing a lot of obesity and illnesses, like diabetes. Less obvious, but just as profound, the media diet causes physical changes in the brain. Some of these changes include addictions.

You can see when someone becomes obese. You can’t see, however, when a brain becomes addicted. Underneath the skull, truly physical changes happen. The brain rewires itself according to what it’s being fed.

In the case of the pornography addict, the brain becomes unsatisfied with what once gave it pleasure. It hungers for new, more exciting, images. It gets hungry more often. It becomes more and more distracting.

The cure for obesity is a change in diet and exercise. The cure for the brain is given in the Bible:

Do not conform to the pattern of this world, but be transformed by the renewing of your mind. Then you will be able to test and approve what God’s will is – His good, pleasing and perfect will.

The mind, including the brain, can be transformed by what you feed it. If the mind feeds on the will of God unhealthy desires diminish. When the Apostle Paul speaks of “the pattern of this world” that includes media filled with violence and sex. They’re like junk food that leads to obesity.

Science clearly warns parents and families about the danger associated with toxic media sex and violence.

That’s why Movieguide® (www.movieguide.org) is such a vital tool in the arsenal not only of parents and grandparents, but also teachers and churches.