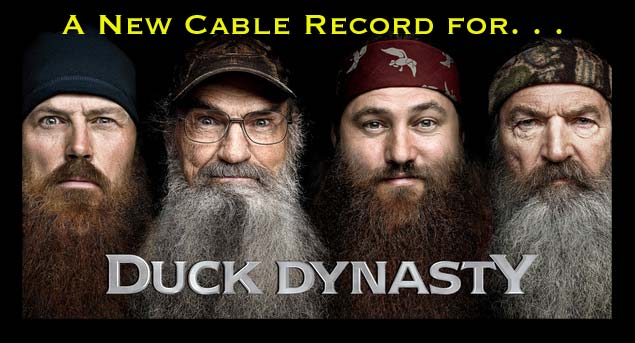 The family reality television show “Duck Dynasty” shattered records on Wednesday with its season premiere drawing in over 11.8 million viewers. This makes it the most-watched non-fiction series telecast in cable history.

To the loyal readers of Movieguide®, this is no surprise. Each year at our annual Movieguide Awards we show Hollywood that movies with pro-family, and pro-Christian content do significantly better at the box-office than movies promoting anti-Christian anti-Biblical content.

During the episode, Kay Robertson tells her husband of 49 years, “From the time I was 14-years-old, I loved you. I loved you when we were poor, and you were not so nice. Now, you’re really nice and kind, and all I can say is I’m not going anywhere. I will love you forever.”

Duck Dynasty resonates with the 149 million Americans who attend church weekly. Most episodes end with the family gathered around the dinner table as head Duck Commander Phil Robertson leads in a prayer. It’s a reality show that affirms values like faith, family and free market capitalism. Values that are held by most of the “flyover” states.