What Do the Emmy Nominations Teach Us? 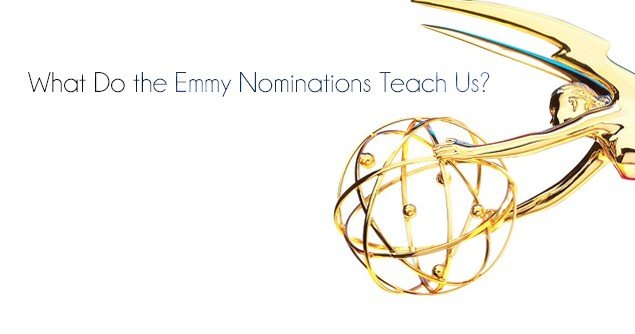 What Do the Emmy Nominations Teach Us?

Remember when you were in high school and in order to be a part of the popular crowd you had to dress and act just like them? Then, once they deemed you worthy to become one of them, you had to constantly conform to their standards, even if what they were doing conflicted with your values and belief systems?

Last week, Mindy Kaling and Carson Daly hosted the live broadcast of the nominations for the 2014 Primetime Emmy awards. Leading the pack was Netflix’s  original series HOUSE OF CARDS with 18 nominations. ORANGE IS THE NEW BLACK followed closely behind with 12 nominations, the most of any comedy, while highly acclaimed show BREAKING BAD received 16 nominations. Although each of these shows have completely different plots, they all share one thing in common:  all of them are rated MA for mature content.

With all of these shows with mature thematic material receiving Emmy nods, this creates a disturbing trend for network TV. Shows with tamer storylines will now have to add more violent and sexual content to keep up with the shock value these Emmy nominated shows portray.

The main plotline of BREAKING BAD involves an introverted Chemistry teacher (Bryan Cranston) who, along with his former student (Aaron Paul) start cooking Crystal Meth in order for Cranston to provide for his family after his sobering diagnosis of Stage 4 lung cancer. Although some may relate to the show’s main character, most episodes involve gruesome violence, all communicating the pervasive message that life is not to be considered sacred if it gets in the way of a big payday.

ORANGE IS THE NEW BLACK takes a comedic approach to life in prison as white-collar woman Taylor Schilling serves a prison term of fifteen months for being an accessory to her former girlfriend’s covert drug operation. Black’s plot has very little violent content, but includes gratuitous sex scenes so graphic, they border on pornography.

What does this mean for your favorite, mildly themed shows?

Much like high school, the popular kids of cable are making gratuitous sex and violence the norm and major networks are going to have to up the ante if they want to contend with them.

According to an article entitled “More Sex, More Violence, More Troubled Kids,” author Kristen Fyfe confirms that TV shows are in fact portraying more graphic content. The Parent Television Council found “that portrayals of violence are up 75 percent since 1998. And, the violence portrayed is now a fundamental part of storylines, whereas in 1998 violence was incidental to plots. The study also found that violence is depicted more graphically than ever before.”

With shows receiving awards for the more disturbing content, one can only assume the trend of more maturely rated shows will increase, creeping their way into the major networks’ prime time lineup.

Now, excuse me, while I return to watching reruns of “The Brady Bunch.”