Five Things Every Christian Should Do About EXODUS: GODS AND KINGS 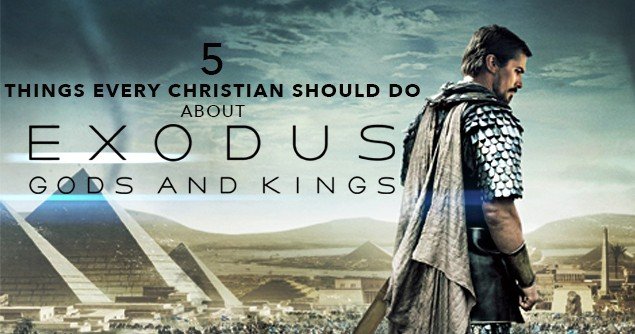 Five Things Every Christian Should Do About EXODUS: GODS AND KINGS

EXODUS was made by Christians and non-Christians alike. It takes hundreds and many times even thousands of people to get a movie like Exodus developed, produced, filmed and distributed. Among those many people are Christian individuals who put an immense amount of creative, physical and emotional energy into the movie. Hollywood is made up of people, and God calls us to love these people. Be slow to anger and gracious in word and thought regarding the filmmakers.

The best way to keep a Godly perspective on things is to pray. Pray for the unbelieving filmmakers that desperately need Jesus. Pray that God would use EXODUS: GODS AND KINGS as a reminder of his power and magnitude. Pray that the accurate elements would further His kingdom and that the inaccurate parts won’t detract from the main message. Pray that everyone who watches will realize their own enslavement to sin and will see that God, just as he did with the Israelites, sets the captives free.

God’s holy and infallible word is truth. Make sure that EXODUS: GODS AND KINGS feeds your desire to read the scripture, and doesn’t replace it. Even though NOAH had many many issues, biblegateway.com revealed that the movie NOAH resulted in a 223% increase in people reading Genesis 6-9. Pray that EXODUS causes the same desire for people to read the Bible.

EXODUS isn’t a perfect movie, but it’s also not an attack on the Christian faith. Instead of boycotting it, watch it, knowing that it is an imperfect artistic interpretation of scripture made by fallible humans. Understand that even the actors who portray the lead characters don’t fully realize the importance of what they’re doing because they don’t understand the Gospel and God’s redemptive narrative through history.  For a detailed analysis of both the content and theological aspects of EXODUS, click here.

If a movie causes us to do one thing, it should move us to action. This might look different for every person because everyone takes away different things from movies. It might convict some to reflect on God’s goodness to them or others may be inspired to write better, more biblical screenplays than the ones that are getting produced (if that’s you, be sure to contact us). Who knows, someone may watch EXODUS and be moved to be a modern day Moses to free children enslaved in sex trafficking. The possibilities are endless, but only if we let God move us so we can take action.