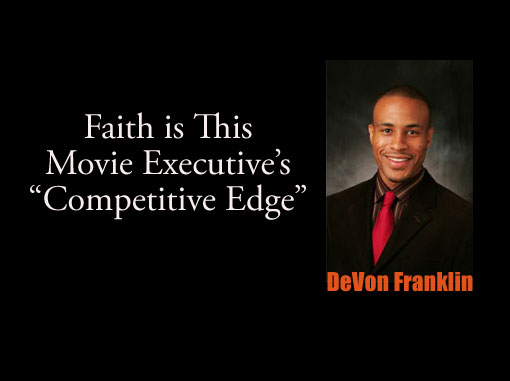 If the life of DeVon Franklin was given the Academy Award for Best Picture, the award recipient would be faith.

Such was the idea that sparked the title of “Produced By Faith: Enjoy Real Success Without Losing Your True Self,” written by DeVon Franklin, vice president of production for Columbia Pictures at Sony Pictures Entertainment.

In this book, which was recently released by Howard Books, Franklin parallels the development and production of a blockbuster movie to the development and production of a successful life story from the perspective of a devout Christian. In fact, Franklin, who is a Seventh-day Adventist, unplugs from his executive responsibilities from sunset Friday to sunset Saturday. In addition, one weekend a month, Franklin, who is also an ordained elder at Wings of Love Maranatha Ministries in Oakland, preaches at this church where he was raised and professes his Christian faith and churches throughout the country.

While some may think being a Christian in Hollywood may be difficult at best and an impediment to real success at worst, Franklin says in his book that his faith actually provides a “competitive edge,” enabling him to work with top people in Hollywood because he hasn’t compromised his ideals.

Franklin oversaw the blockbuster remake “The Karate Kid,” which starred Jackie Chan and Jaden Smith and grossed more than $350 million worldwide. Franklin also worked on other popular films including “The Pursuit of Happyness” starring Will Smith, “Not Easily Broken” produced by Bishop T.D. Jakes and “Jumping the Broom” starring Angela Bassett.

MOVIEGUIDE® interviewed Franklin about his purpose for writing his book and his approach to filmmaking.

“I see too many people struggling with their faith,” said the 33-year-old Franklin, “struggling in their careers, giving up what they believe in to try to make ends meet and find quote unquote success. I’ve discovered that there is a better way to live and a better way to success. I know that I’ve had the experiences I’ve had at this age for a reason. It wasn’t to just keep to myself. It was to share.”

In the book, Franklin chronicles plot twists and turns from being a University of Southern California student while landing an internship working for Will Smith at Overbrook Entertainment to his first executive job at MGM to Columbia Pictures. With chapter names such as “You, the Movie,” “Development Hell,” and “God’s Green Light,” Franklin demonstrates his faith in God.

While Franklin is living the storied life of a Hollywood executive, he also revealed his difficult backstory that ultimately inspired him to make movies. His mother and father raised him and his two brothers in the suburbs. Unfortunately, as his father rose through the corporate ranks of his UPS job, he became an alcoholic, dying a few years later after suffering a heart attack. Entertainment, particularly television shows like the “The Cosby Show” and movies like “The Color Purple,” became his refuge. Franklin uses that adversity he experienced to make great movies.

“So much of movie making is dependant on mirroring the human experience and people being able to see themselves on the screen when they come to a movie,” says Franklin. “What I have gone through, I believe, has given me the ability to understand the hurt that people go through, and I do my best to bring that ability to relate to the characters I develop.”

Franklin is currently working on the remake of the 1976 movie musical “Sparkle” which was inspired by The Supremes. The shooting of the remake, which will star Whitney Houston, Jordin Sparks and Derek Luke, will start in a few weeks in Detroit, and be in theaters in 2012. Heaven Is for Real: A Little Boy’s Astounding Story of His Trip to Heaven and Back, a best-selling book by Todd Burpo and Lynn Vincent, is also being developed.

Although he’s a Christian and a black person, Franklin says in his book he has worked to not be confined to either category, allowing him the flexibility of working on a spectrum of movies throughout his career. Still, he has certain goals for all of his movies.

“In my experience, movies that do appeal to families tend to perform better overall and have more sustainability, and at the same time, I don’t want to be untrue to a story,” Franklin says. “I also want to make sure that as many people as possible can see a film and that there are virtues in the film that ultimately will empower people.”

Editor’s Note: Jacqueline J. Holness is a correspondent for Courthouse News Service, an online, national news service for attorneys. Her first book After the Altar Call: The Sisters’ Guide to Developing a Personal Relationship With God will be released on Feb. 14, 2012. For more information, go to afterthealtarcall.com.