Angelina Jolie Dropped to Her Knees in Prayer While Directing UNBROKEN 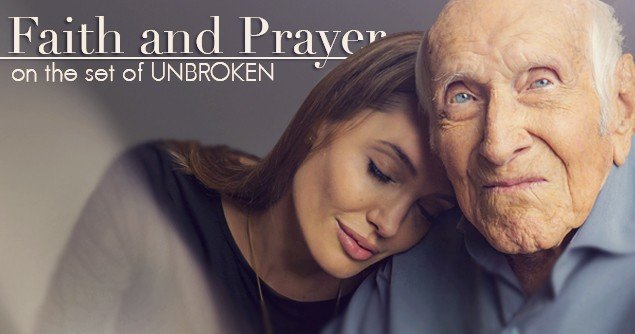 Faith and Prayer on the Set of UNBROKEN:

Angelina Jolie Dropped to Her Knees in Prayer While Directing UNBROKEN

There’s little doubt that the heavily anticipated movie UNBROKEN will greatly impact and inspire audiences worldwide when it hits theaters Christmas day. It tells the incredible, true story of World War II prisoner of war survivor Louis Zamperini and his unimaginable journey of hardship and suffering that he endured only because of his steadfast refusal to back down, his dogged determination to hang onto hope, and ultimately his insistence on forgiving those who sought to break both his body and spirit.

With such an epic, heartrending tale to envision and recreate for the big screen, even the movie’s director, Angelina Jolie, found herself face to face with the power of prayer during production.

“[Angelina] said, ‘I don’t know what I’m going to do, so I’ll do what Louie would do,’” Garris said at a recent press conference. “She got on her knees, and she prayed for a miracle. . . everybody saw it. It stopped raining. The sun came out, a rainbow came out. She said, ‘Let’s get this take,’ [and] they shot the take. When she said ‘cut,’ it started to rain again.”

Jolie, said Garris, was moved by Zamperini’s faith. Garris believes it was part of God’s plan for Jolie “to find Louie and make this movie to find her way to a life that would encompass the Almighty.”

In an exclusive interview with Movieguide® TV co-host Evy Baehr, Angelina said, “We are all searching for what is it that’s going to pull us through. This film speaks of that. It speaks of how to overcome, of how to face obstacles.”

When Evy asked Angelina how UNBROKEN will reach the faith community, Jolie said, “Faith is very present in our film. Sometimes we represented it with very obvious symbols, and sometimes it’s the light. It’s the darkness and the light.”

For those of us who have been walking with God for some time, we know that the Lord speaks to us in myriad ways. Sometimes, it’s a sermon that feels as though it was prepared just for us, or a timely Scripture that practically jumps off the page and into our hearts. Other times, however, the Spirit’s voice is soft as a spring rain – we only hear it if we’re expecting to hear it. This latter still voice seems to be what Jolie heard that day on set, when the clouds rolled away, sunlight poured out of heaven, and a rainbow framed the scene in a way no cinematographer could imitate.

While no one can know for certain what, if any, impression Angelina Jolie’s answered prayer may have made on her beliefs regarding salvation through Jesus Christ, her humble act of supplication represents so many on this planet who are, as she said, searching. Christians should feel encouraged to pray that Jolie’s beautiful experience while filming UNBROKEN, as well as her relationship with Zamperini, will remain with her, speak to her and help guide her to invite Jesus to become her personal Lord and Savior.

Movieguide® believes UNBROKEN to be a movie well worth seeing this Christmas season as it possesses a very strong biblical worldview that extols courage, forgiveness, sacrifice, and the importance of clinging to hope in the midst of life’s bleakest moments. Though the movie doesn’t follow Zamperini’s life after the war (the time during which he became a Christian leader), the final titles do reveal his eventual faith in Christ, a fact that, in our eyes, makes him even more of a hero.

Diana Anderson-Tyler is the author of Creation House’s Fit for Faith: A Christian Woman’s Guide to Total Fitness and her latest book, Perfect Fit: Weekly Wisdom and Workouts for Women of Faith and Fitness. Her popular website can be found at dianaandersontyler.com, and she is a co-owner and coach at CrossFit 925. Diana can be reached on Twitter at @Dianafit4faith.