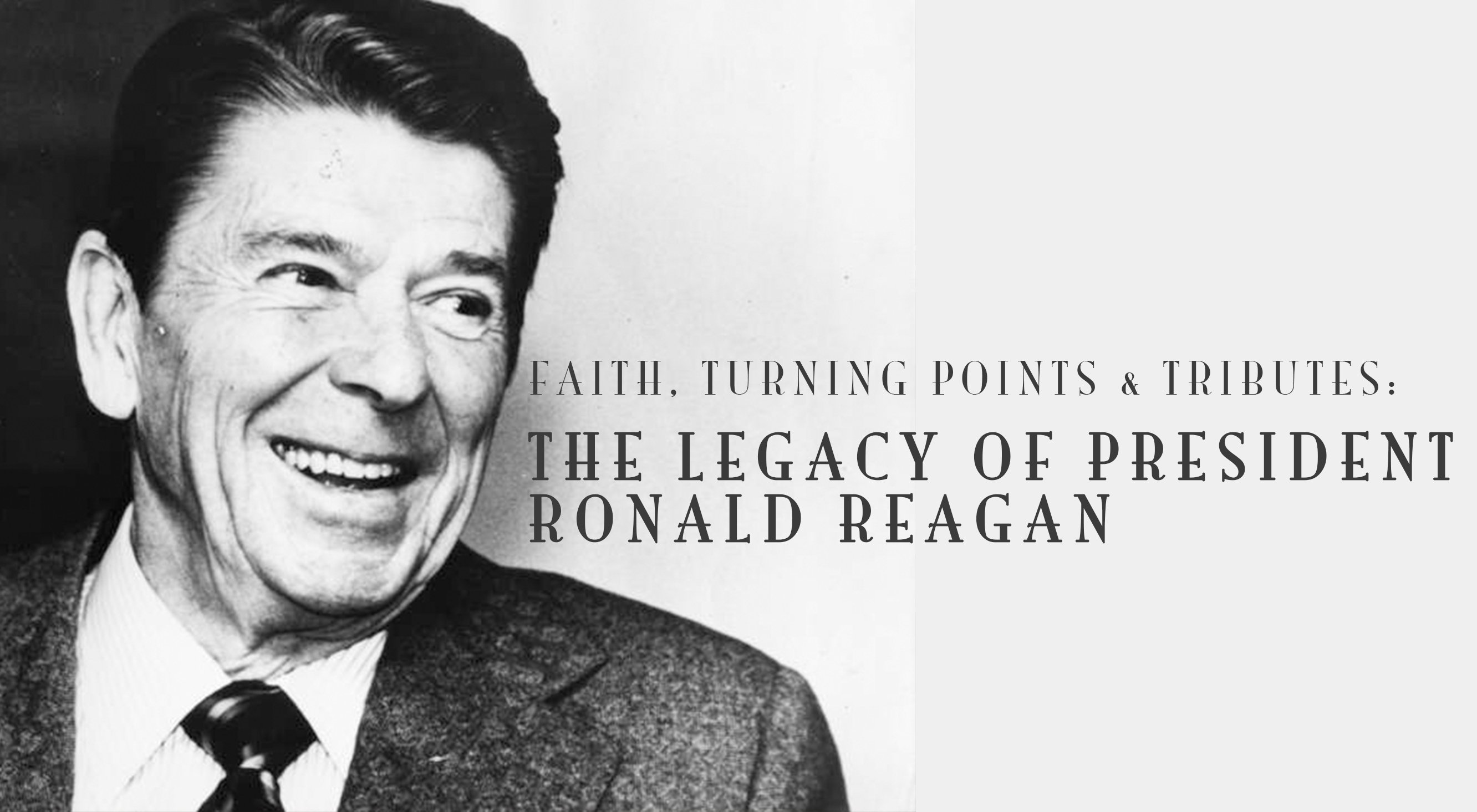 The Legacy of President Ronald Reagan

The recent television movie KILLING REAGAN dramatizes the assassination attempt on President Ronald Reagan that was a turning point in his administration (1981-1988). The experience compromised his physical wellbeing, but strengthened his faith, enabling him to end the Cold War.

The movie, developed from Bill O’Reilly and Martin Dugard’s best-selling book,  reveals how Reagan responded when he was asked who shot him. When he learned the name of the shooter, he said he would pray for the would-be assassin. The movie also shows how later he told his wife Nancy that he believed he was spared for a reason and that the rest of his days belonged to God.

However, this movie only gives a glimpse into the life and legacy of this great man, begs some questions, and creates a desire to know more about the Hollywood actor who became the Great Communicator and one of America’s best, most beloved presidents.

Ronald Reagan’s mother, Nelle, was a committed Christian woman, had a profound influence on him. Reagan’s favorite book as a child was about a boy named Dick who ran away from home and his alcoholic father. He came to a church where a Christian man helped him and gave him a job. Dick became a leader in the church. People in the church told him, “You ought to be a congressman, Dick.” He helped to make their city a shining one.

Inspired by this story, little Ronnie at 11-years-old told his mother that he wanted to be like Dick and wanted to be baptized.

After Ron rose from the baptism waters, the pastor said, “Arise and walk in newness of faith.” Ron said he was “called” at that moment when “I invited Christ into my life.” Ronald then began to develop communication skills speaking in a church. The book about Dick also taught Ronald about what the author and he called “Practical Christianity.”

Ron began acting in his church. A local newspaper said that, at 13, he captivated the audience by his one act dramatic reading. At 15, he began teaching Sunday School and continued to do so until he went to college. As a young actor in Hollywood, Reagan joined a local church.

Reagan later said that he loved what Jesus said, “You are the light of the world. A city on a hill cannot be hid.” Later, he would speak of America as “A Shining City Upon a Hill.” After he married actress Nancy Reagan, they attended church together.

Reagan had another awakening after Rev. Cleveland Kleihauer suggested that in an after-dinner speech Ron was to give that he should add communism to his speech blasting Nazism and Fascism.

Eventually, Reagan came to see that the Hollywood left was naïve about communism and its dangers. He believed that God wanted people to be free. He believed in the inalienable rights that John Locke and Thomas Jefferson described:  the right to life, liberty and the pursuit of happiness. Any ideas against those basic freedoms were unbiblical. As a result, Reagan was concerned that the Russian people who were held captive by an atheistic, oppressive ideology.

Many Christian leaders have spoken highly of Ronald Reagan and his faith.

For example, James Dobson of Focus on the Family praised Reagan as “the first President to step out boldly to protect the unborn child.”

He said, “We might come closer to balancing the budget if all of us lived closer to the Commandments and the Golden Rule.” He also said, “Without God, there is no virtue because there’s no prompting of the conscience. And, without God, democracy will not and cannot long endure. If we ever forget that we’re one nation under God, then we will be a nation gone under.” Further, he once said, “God’s miracles are to be found in nature itself; the wind and waves, the wood that becomes a tree … all of these are explained biologically, but behind them is the hand of God.”

After America’s 40th president died from complications of Alzheimer’s disease, then President George W. Bush talked about how Ronald Reagan’s faith enabled him to confront death twice “with courage and grace.”

In the eulogy, Bush spoke of how Reagan responded to the assassination attempt on his life shortly after he took office in 1981 and then to the onset of Alzheimer’s disease in 1994.

“In both these trials,” Bush said, “he showed how a man so enchanted by life can be at peace with life’s end.

British Prime Minister Prime Margaret Thatcher also gave a tribute at this memorial service, sating, “Ronnie himself certainly believed that he had been given back his life for a purpose. . . . And, surely it is hard to deny that Ronald Reagan’s life was providential when we look at what he achieved in the eight years that followed.”

Memorial tributes included references to his opposition of Soviet communism and the “evil empire.” President Bush said that President Reagan “believed in the power of truth in the conduct of world affairs. When he saw evil camped across the horizon, he called that evil by its name.”

Thatcher said Reagan “sought to mend America’s wounded spirit, to restore the strength of the free world and to free the slaves of communism. . . . Ronald Reagan knew his own mind. He had firm principles and, I believe, right ones. He expounded them clearly.”

President George H. W. Bush the Elder said at the President’s memorial, “As his vice president for eight years, I learned more from Ronald Reagan than from anyone I encountered in all my years of public life. I learned kindness; we all did. I also learned courage; the nation did. And, I learned decency; the whole world did. Perhaps as important as anything, I learned a lot about humor, a lot about laughter.

“He never made an adversary into an enemy. He was never mean-spirited.”

U.S. Senator John Danforth used the text from Matthew 5:14-16 to say, “You are the light of the world, a city set on a hill cannot be hid.”

“It was his favorite theme from his first inaugural address to his final address from the oval office,” Danforth recalled. “For him, America was the shining city on a hill. It rang of optimism, and we longed to hear it, especially after the dark years of Vietnam and Watergate. It was a vision with policy implications. America could not hide its light under a bushel. It could not turn in on itself and hunker down. Isolationism was not an option; neither was protectionism. We must champion freedom everywhere. We must be the beacon for the world.”

This service followed other ceremonies in memory of Reagan, whose pro-life stance, pro-family policies, and opposition to communism, made him especially popular with evangelical Christians. A powerful, not-to-miss video of Ronald Reagan speaking of the importance of the Christian faith for our nation can be seen here on You Tube.