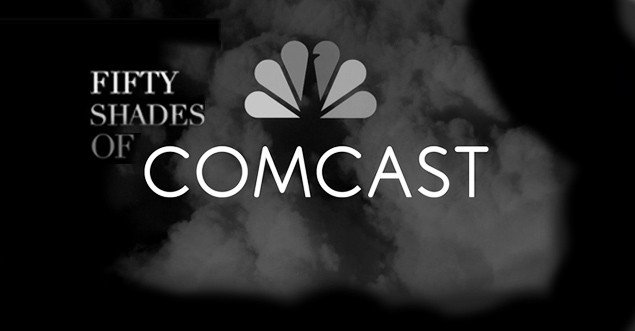 Through their subsidiary, Focus Features, Comcast NBC/Universal has just released the movie FIFTY SHADES OF GREY.

How does this square with the way Comcast explains to the world its reason for being. Could it be that Comcast’s behavior is a number of shades darker than their stated goal:

As a company uniquely positioned to inform, empower, and inspire, we embrace the opportunity to create conversation and mobilize action to address some of the nation’s most critical issues. At Comcast and NBCUniversal, it’s not just about moving our business forward, it’s about moving people forward.

Indeed, FIFTY SHADES OF GREY has created conversation about the sexual behavior in the movies of Comcast NBC/Universal and the other studios in Hollywood.

We wish to engage in the conversation “embraced” by Comcast and suggest some action that would help them move in the direction of their stated goal.

To begin the discussion let’s give the company credit for making a commitment to “Move people forward.”

Americans have traditionally considered advancing civility as forward movement. They see incivility and immorality as the opposite. Increasing unwed births, high divorce rates and soaring prison populations are not considered by most Americans to be “moving people forward.”

Comcast NBC/Universal is uniquely positioned to “inform, empower and inspire” a better world. They’re one of the very few massive media conglomerates on earth. They produce about 12 movies a year (almost 30 if you count their subsidiaries including Focus Features). They produce thousands of hours of broadcast and cable programming. They produce music and offer theme parks. Their potential for “moving people forward” is tremendous.

In what’s known as the Lord’s Prayer (Mathew 6:10),  Jesus taught his followers to pray to their Father God, “Thy kingdom come, thy will be done on earth as it is in heaven.”

Christians see earth becoming more like heaven as moving forward. In heaven, there is no police force demanding that residents obey God. No one is taken to court or put in prison for misbehavior. Heaven is the ultimate model of civility because the residents of heaven whole-heartedly desire to be kind, considerate, helpful, and unselfish.

It’s time Christians asked the major studios, “How do you think the entertainment you produce is making the world a more civil place to live?” Is it making earth more like heaven?

Movieguide® is a ministry of the Christian Film and Television Commission. Our ratings are based on biblical values. Consider what those who do not share our values have to say about Universal’s 2014 movies. The industry’s own MPAA rating panel described the content of Universal’s 12 movies released in 2014.

(1) Pervasive language, strong crude and sexual content, graphic nudity, and drug use throughout.

(4) Crude and sexual humor, partial nudity, language and some drug

(5) Strong disturbing violence, and for language.

(6) War violence including intense sequences of brutality, and for brief language.

(8) Strong crude and sexual content, language throughout, some violence and drug material.

(9) Sexual content, drug use, some strong language, and violent situations.

(12) Bloody violence/terror, and language throughout.

Movieguide® actually selected Universal’s UNBROKEN, as one of its best 2014 movies for mature audiences (“War violence including intense sequences of brutality and for brief language”), however, if you look at the full list it’s hard to imagine this slate of movies “moving people forward.”

Imagine a movie slate with high entertainment value, but with wholesome, uplifting content.

In 2013 Movieguide® rated as one of it’s favorite family movies Universal’s DISPICABLE ME 2. It made more money than twice the domestic and international box office of any movie released by Universal in 2014. It’s the basis for theme park rides and has undoubtedly brought in billions in toy and clothing sales.