FURIOUS 7: Dawn of the Digital Actor? 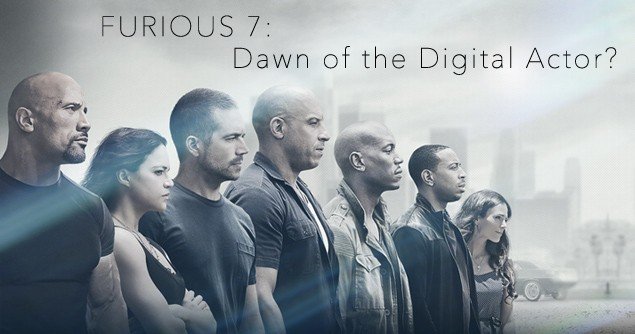 FURIOUS 7:  Dawn of the Digital Actor?

With the upcoming April 3 release of FURIOUS 7, the latest in the FAST AND FURIOUS film franchise, the debate has renewed over the possibilities of digital composites standing in for real physical actors. When star Paul Walker died in a car accident in November 2013, only halfway through filming the movie, Universal Pictures needed a way to fill in the role. In the end, a mix of body doubles and CG were used to finish the scenes Walker had not yet filmed.

Walker’s brothers, Cody and Caleb, acted as physical stand-ins, and footage from some of the earlier FURIOUS movies were reportedly used, which is common practice given the untimely death of an actor. However, it’s becoming more and more common (and feasible) for studios to use CG to modify or create an actor’s role in a scene.

According to an article published in The Hollywood Reporter March 25, the groundbreaking CG technology used in movies such as Peter Jackson’s LORD OF THE RINGS trilogy (most notably for the character of Gollum) was used in finishing the production of Walker’s unfinished scenes.

Actors have been digitally recreated in movies such as GLADIATOR (2000) and even television shows like THE SOPRANOS, or even for their appearance in dangerous stunts such as in CAPTAIN AMERICA:  THE WINTER SOLDIER or the lightsaber fight at the end of STAR WARS:  THE PHANTOM MENACE. Some movies now use 3D scans of the actors for such stunt work. However, as digital technology advances, the possibility of digitally animating an actor for an entire movie role has become more of a real possibility.

How far this technology takes the realm of digital acting remains to be seen, but hold onto your popcorn, fellow moviegoers!