God’s Not Dead in Georgia But He’s Under Attack 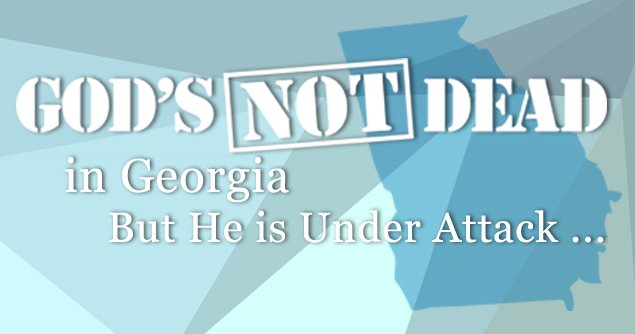 By David Outten, a Georgia resident

GOD’S NOT DEAD 2 is an inspiring fictional story of secular, atheist intimidation of Christians. A real life example is playing itself out in Georgia with the big name intimidators being Disney, Netflix and the NFL.

The Georgia legislature recently passed a law titled “An Act to Protect Religious Freedoms.” This aroused a firestorm of threats to the state of Georgia from major media companies and sports leagues. They demanded the governor reject the bill or face economic sanctions.

So, this weekend Governor Nathan Deal vetoed the bill, but State Senator Mike Crane called for a special session to override Deal’s veto.

(1) “No minister of the gospel or cleric or religious practitioner ordained or authorized to solemnize marriages according to the usages of the denomination, when acting in his or her official religious capacity, shall be required to solemnize any marriage in violation of his or her right to free exercise of religion under the Constitution of this state or of the United States.”

(2) “No business or industry shall be required by ordinance or resolution of any county,  municipality, or consolidated government to operate on either of the two rest days Saturday or Sunday.”

What’s so egregious about saying preachers can’t be required by law to disobey God’s Law? Should Hobby Lobby be forced to open on Sundays? Should churches, Christian schools and missionary organizations be forced to allow use their facilities for activities they believe are contrary to the tenants of the faith?

This bill isn’t out of step with the average American. Ask them:

Should preachers be forced to bless aberrant behavior before God?

Should Christian schools have a right to deny groups that hate them the right to rent their facilities?

You’d get resounding “no” answers. Yet, some of America’s leading media and sports companies threatened to punish Georgia for this legislation.

The movie GOD’S NOT DEAD 2 focuses the audience’s attention on the intimidation of Christians. It inspires Christians to wake up and protect their religious liberties.

It’s time for Christians to tell the anti-Christian corporate executives that they’re the ones who stand to lose billions for opposing religious liberty. The only way these entities can intimidate the state of Georgia is if they assume their action will not have a negative economic impact on their own profitability. Imagine the reaction of the NFL if Christian Americans quit watching NFL football (on television or at games). What if Christians decided to quit watching ESPN, especially its NFL football games?

God is not dead. He never will be. God’s laws will never be refuted or revised. If Americans live honoring God – and His laws – America will see greater prosperity. The rejection of Christianity in favor of self-destructive and culturally destructive perversion has a far more profound impact on the economy of Georgia than any boycotts that can be organized by media executives. If no more movies were shot in Georgia, and the Atlanta Falcons moved to Hollywood, the economic impact would be far less than the impact of the adultery, perversion, and sadistic behavior being defended by the corporate executives. They should be asked, “Should preachers be allowed to oppose pedophilia?”

Martin Luther King Jr. once dreamed of his children being judged by their character rather than the color of their skin. To judge someone by their character is to favor moral character over immoral character. It’s to favor honesty over dishonesty, kindness over cruelty and, yes, sexual purity over promiscuity. To judge character is to discriminate in favor of morality. To tell Georgia you aren’t allowed to discriminate in favor of morality is to unleash more hell in Georgia.

It’s not worth it. Take your entertainment projects and your Super Bowl. Make Georgia more like heaven on earth, and the economic impact will be amazing.