The Good and Bad in NOAH 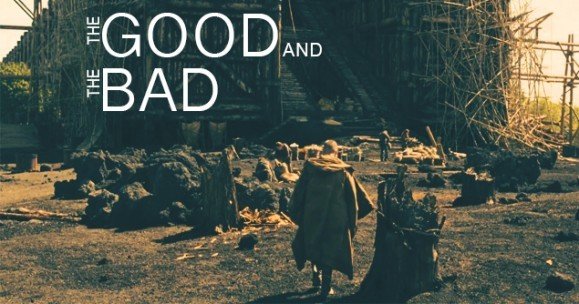 The Good and Bad in NOAH

Director Darren Aronofsky is known for movies that have a maverick and mystic quality. NOAH is no different. Rather than a straight forward retelling of the biblical story, it is more accurate to say this movie is inspired by the biblical character and flood event, mixed with a lot of creative license.

The story begins with Noah’s childhood and quickly transitions to his adult life in a world that has by spoiled by human sin. Noah (Russell Crowe) is warned by God in a dream that the earth will be destroyed by a flood. Noah’s wife (Jennifer Connelly) and Methuselah (Anthony Hopkins) both confirm God’s message and Noah’s mission to save the animals and his family through the ark.

Tubal-Cain (Ray Winstone) begins as Noah’s nemesis from a scene in the hero’s childhood and finishes as his enemy in a violent hand to hand combat scene on the ark. In between, Tubal-Cain tries to turn Noah’s son against him, launches a military attack on Noah’s ark project during construction, and finally manages to hack his way into the ark as the flood surges.

The “Watchers” assist Noah. They are Aronofsky’s fanciful development of the biblical Nephilim concept. We are told angelic creatures helped early man with technology; humans abused it for evil; God cursed the angels for this and turned them into rock giants; these fallen angels help Noah defend and build the ark; when they die in the battle against the bad guys, the mysterious beings go up to heaven. Of course, in Christian theology, fallen angels keep falling, down to the other place.

While showing images of war, violence, theft, and sexual sin, the main evil of humankind according to Noah is the abuse of the environment. Man has been guilty of a scorched earth policy brought about primitive industrialization, resulting in apocalyptic scenery reminiscent of the Mad Max trilogy.

In spite of that unbiblical emphasis, the movie takes sin and its consequences seriously. On the surface, the guilt of mankind and the righteousness of God’s judgment are consistent throughout the film. Below the surface, Noah comes to see the sin of his family and himself in a powerful scene. Even though they live in harmony with nature, Noah struggles with the idea that his family will simply corrupt the new earth again after the flood is over. This is beyond a mere surface treatment of sin, and it is thought provoking.

But, it is at this point Noah becomes so disturbed by human sinfulness that he obsesses on the idea that the race should not survive. God must be using the hero’s family just to save the animal kingdom and then mankind will die out. If his son’s wife has a baby girl, Noah announces a plan to take that life to prevent the human race from going forward. Later, with Noah’s knife raised over twin daughters you sense a composite, Noah mixed with a bit of Abraham and going crazy.

The portrayal of Noah during this part of the movie is so dark that you do not to like him. It is hard to reconcile this character with the “righteous” man described in Genesis 6 or the man of “faith” described in Hebrews 11. Jews and Christians will have a hard time recognizing him.

The movie concludes with Noah’s family getting off the ark and includes the drunkenness and nakedness event. The final scene brings some resolution. It includes the restart of the earth and the human race, the biblical altar in Genesis 8, along with a reaffirmation of the stewardship mandate as restated in Genesis 9.

Other positives of the movie are: God is emphasized as the Creator, God’s salvation is provided through the warning and the ark, seems like a global flood, no one survives outside the ark, the ark for this movie was built to biblical specifications, a pro-life/anti-infanticide scene; Paramount has issued a disclaimer clarifying this movie is only inspired by the Bible, not a line-by-line retelling of the Scripture, pointing people to Genesis for the biblical account of Noah.

Other negatives of the movie are: Theistic evolution scene (although God definitely starts it and humans seem to be a separate creation with no anthropoid halflings); magic objects (seed, potion, potus, birthright snake skin); two of each species getting on ark instead of two of each biblical “kind” (not enough room for that); two of Noah’s sons (teenagers, not adults) do not bring wives on the ark, but the one son’s wife has two twin girls. Are these future wives for the other two?

The positives and the negatives produce a mixed bag. Therefore, caution and discernment are advised for children or those not familiar with the biblical story.