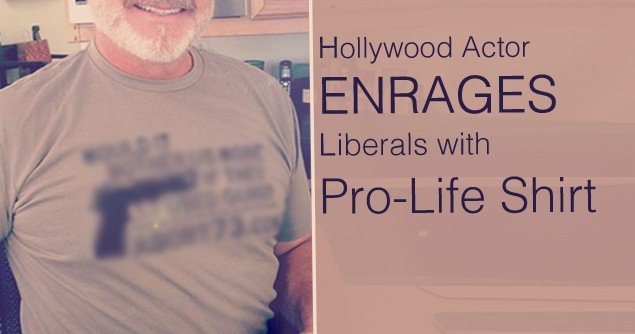 Actor Kelsey Grammer, best known for his role as quirky radio psychiatrist Frasier Crane on the hit TV show FRASIER, recently outraged liberals when he posted a picture of himself on Instagram wearing an anti-abortion t-shirt. The shirt bears the image of a gun and the provocative question, “Would it bother us more if they used guns?” with the website abort73.com listed below it. According to its website, Abort73 exists to “demonstrate why elective abortion is immoral and unjust.” On the website, one section is devoted solely to women wishing to publicly express any regrets they have about receiving an abortion. In the famously anti-guns and pro-choice sphere of Hollywood, Mr. Grammer’s decision to so boldly and unequivocally support the organization and its cause is unpopular among media critics, to say the least. The Huffington Post called the shirt “bizarre,” while HollywoodLife.com deemed it “outrageous” and said it had an “extremely disturbing message.” On the other hand, Mr. Grammer’s gutsy photo was applauded by many and re-posted to countless accounts, spreading the biblically-backed message of the sanctity of life, as well as the constitutionally-sound allusion to the second amendment, throughout cyberspace. According to a recent Gallup poll, 44% of Americans are pro-life, clearly showing that Mr. Grammer’s conservative opinion, depicted on his “bizarre” and “outrageous” t-shirt, is widely held. As for gun control, less than half of Americans, 47%, are in favor of stricter gun laws, again proving that Mr. Grammer isn’t out in left field (no pun intended) when it comes to his political leanings. At MOVIEGUIDE®, we take seriously the Bible’s inerrant and unchanging views on human life, namely, that it should be cherished and protected. Consider Proverbs 24:11-12: “Rescue those who are unjustly sentenced to die;     save them as they stagger to their death.  Don’t excuse yourself by saying, ‘Look, we didn’t know.’     For God understands all hearts, and he sees you. He who guards your soul knows you knew.     He will repay all people as their actions deserve” (NLT). The earliest child sacrifice (abortion) in the Bible is mentioned in the Old Testament book of Leviticus. The practice is addressed by Moses in chapter 18, verse 21: “Do not permit any of your children to be offered as a sacrifice to Molech, for you must not bring shame on the name of your God. I am the Lord” (NLT). The “sacrifice” refers to horrifically burning children in a fire.  This “passing through to Molech” (the Hebrew phrase is used both in Leviticus and Jeremiah) occurred later in Israel’s history in the region of the high places of Ba’al in the Valley of Ben Hinnom, according to Jeremiah 32:35. The murderous act was described by the Lord through the mouth of Jeremiah in earlier chapters. What’s important to note is that God says explicitly that He did not command, mention, or even think of such atrocity. Abortion was – and is – a demonic idea, not a divine statute. He warns the Israelites of the judgment that will come on them if they continue killing the innocent. Because God is the same yesterday, today, and forever, we know He hasn’t changed His mind or averted His gaze from the countless unjust murders that continue to be committed in this nation “under God.” We commend Mr. Grammer for taking a stand on a critical issue and pray that more Americans will have their eyes opened and hearts softened to see and believe how much God loves every single body He knits together in the womb. Sources: Hollywoodlife.com (October 9, 2015); Huffingtonpost.com (October 9, 2015); gallup.com (May 29, 2015)   Diana Anderson-Tyler is the author of multiple books on Faith and Fitness and she is a co-owner and coach at CrossFit 925. Diana can be found on Twitter here.