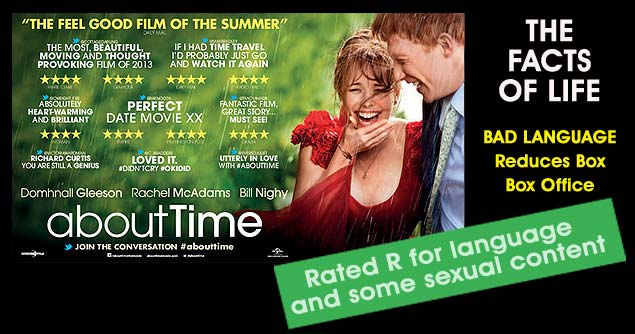 Of all the things that viewers and the MPAA movie ratings board can find objectionable in a movie, the use of foul language has to be the most confounding. Prior to the launch of the modern movie ratings (G, PG, R) in 1968 (with P-13 launched in 1984 and NC-17 in 1990), no obscenities worse than “d” or “h” words were allowed, and God’s name was rarely if ever invoked in vain.

Now, with the new ratings system allowing them to say whatever they want in movies, filmmakers suddenly flooded movie theatres with all manner of expletives and profanities. Sure, many family movies still exist in which barely an offensive word exists, but the question to be asked is:  why does any movie really need foul language, even on an artistic level?

Take a look back through movie history, through thousands of crime movies, adventure tales and thrillers, and you’d be hard pressed to find that any film was found lacking in quality because its characters didn’t drop a bunch of “F-bombs.” Somehow, Humphrey Bogart and other movie tough guys made it through decades of tough-talking and hardboiled characters without ever having to rely on a single forbidden word.

Which brings us to a couple strange examples of the debate over language that are playing in the nation’s theatres right now.

ABOUT TIME is the latest film from romantic-comedy master Richard Curtis, who previously made FOUR WEDDINGS AND A FUNERAL, NOTTING HILL and LOVE ACTUALLY. Its story is typically sweet, sentimental and funny fare, as it focuses on a young British man who learns that he can time-travel – within his own life only – to fix mistakes that he has made and make his life better. He uses that ability to woo the love of his life, and then eventually to improve or save the lives of his other loved ones.

The movie overall is touching, beautiful, and relatively innocent. While there are some sensual elements, no explicit sex is shown, and the couple winds up married with children for most of the film anyway. Yet, ABOUT TIME has an R rating.

Because the movie features about five F words and a brief scene in which sex acts are graphically mentioned for effect that the director intended to be comical (but isn’t). Right now, ABOUT TIME is utterly bombing at the box office, with less than $12 million to its name after three weeks of release.

FOUR WEDDINGS and LOVE ACTUALLY were both R-rated while NOTTING HILL was PG-13, but all were much bigger hits. WEDDINGS had much more racy talk and profanity, while LOVE had some graphic nudity to go with some foul language.

ABOUT TIME is an unabashed family movie with a beautiful father-son subplot involving the end of life and how we resolve our relationships, plus some content promoting marriage and children. The graphic sex jokes and the “f” words don’t even belong in the context of the movie on an artistic level, and it’s baffling to consider why Curtis even bothered to put them in at all since the offensive dialogue is so limited in the overall movie. Leaving it with an R rating has no doubt cost them millions of dollars’ worth of business from morally conservative and older audiences who might have loved the movie, if they weren’t scared away by the R rating.

An even bigger bafflement comes from NEBRASKA, the latest movie from Alexander Payne (THE DESCENDANTS, SIDEWAYS, ABOUT SCHMIDT, ELECTION). The story of an elderly man facing the onset of dementia and the middle-aged son who takes him on a road trip to claim a million-dollar sweepstakes prize, NEBRASKA has a powerful underlying message about how important it is to treat our elderly and mentally infirm people with love and respect. Despite some bitingly satirical moments, it also is unabashedly a portrait of family love and support being cornerstones of a happy and healthy life.

What’s it rated? R – again. Why? This time for just two F words and a derogatory sexual term used as an insult by the father against his son during a mumbled moment of grouchiness. Reportedly, the MPAA ratings board allows up to three “f” words in a PG-13 movie if they’re not used in a sexual context, and in NEBRASKA these words are not sexual.

That means that Payne and his team lost a PG-13 rating over the use of the one insult, which could have been changed to any number of other derogatory terms that were less offensive yet still strong. When we asked about his decision, Payne was defiant.

“You can barely hear that word,” says Payne. “That’s why I went to appeal to the MPAA and said ‘Really? Really? This movie is as innocent as THE ANDY GRIFFITH SHOW. The rest of the world is gonna laugh at you.”

Why not change the word?

“No. I’m not gonna cave to any censorship, ever,” says Payne. “My contract allows an R. The film is what it is. That’s ironclad. On the other hand, it means people up to 16 aren’t going to get to see it, but how many through age 16 are going to seek it out anyway? It means they’re concerned the more conservative adults who shy away from any R rated film, but so be it, you can’t make everyone happy. We asked them ‘Why not put ‘PG-13 for some language’?  They said ‘No, no, we can’t do that.’ You can say ‘Eat Pray Love’ had two ‘F’s’ in it, and that got a PG-13.’ And they say, ‘And we heard about it.’”

“It’s incredibly frustrating,” Berger admitted. “This movie should appeal very much to families as LITTLE MISS SUNSHINE did, and that was a much harder R than this. It says right on the NEBRASKA poster that the rating is for ‘Some Language.’ And, you know, if he had said ‘you little s—head,’ same intent, it wouldn’t have gotten an R. There should be a warning instead, that it’s ‘Devoid of all sexual content.”

“It really puts a spotlight on the ratings system,” Yerxa adds, “because there’s no sexual content in the whole movie, and no violence. “Then, you have a movie like THE SOCIAL NETWORK. It’s a wonderful movie, but there’s coke being snorted off a woman’s body, so what kind of hypocrisy is that? And the violence in a lot of movies, what does it say about the ratings board?”

That may be how the producers see it – and many people (except for Movieguide®) may agree with them – but the question must be asked, Why can’t a talented filmmaker like Payne follow the tradition of his cinematic forefathers and simply not use any foul language at all?

Each year, Movieguide® reviews every major movie nationally released in the United States. At the end of the year, we total up the box office numbers from each movie and find out what amount of foul language, sex, and nudity moviegoers preferred.

Year in and year out, the statistics from Movieguide®’s Annual Report to the Entertainment Industry show that movies with no foul language at all – not even just one light obscenity or one light profanity – earn the most money on average, by a significant amount. In fact, for the last three years alone, the more foul language in a movie, the worst it did at the box office!!!

A lot of today’s filmmakers, critics, and film scholars love to mock the old studio system and its Code of Decency, but maybe the heads of those studios knew what they were doing.

After all, are ANY of today’s movies truly better than the best of the Hollywood classic movies of yesteryear? Would CASABLANCA, THE SOUND OF MUSIC, IT’S A WONDERFUL LIFE, SINGING IN THE RAIN, VERTIGO, CITIZEN KANE, or BEN-HUR really be better movies with a couple “s” words thrown in, much less a few “f” words?

Maybe it’s time for filmmakers like Alexander Payne and Richard Curtis to reconsider what kind of movies they’re making and stop cutting off their nose to spite their face.

Editor’s Note:  The findings of the 2014 Report to the Entertainment Industry will be revealed Feb. 7, 2014 at the 22nd Annual Movieguide® Faith & Values Awards, to be held at the Universal Hilton Hotel in Los Angeles.