Does INTERSTELLAR Have an Environmentalist Agenda? 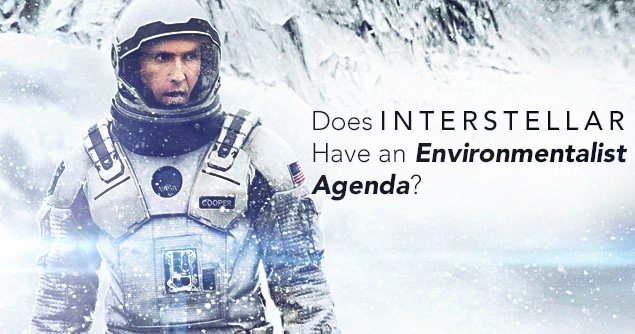 Does INTERSTELLAR Have an Environmentalist Agenda?

The trailers of Writer/Director Christopher Nolan’s most recent science fiction adventure, INTERSTELLAR, have caused many people to wonder if the movie is going to be merely another hysterical left-wing, politically correct warning of man-made global warning, another fear-induced reason for Americans to buy more hybrid cars.

INTERSTELLAR is set on an ecologically devastated earth about a widower who pilots a spaceship into another galaxy looking for a habitable planet that can save his family and all of mankind.

When asked about the message of the movie concerning his environmental concerns, Nolan (who co-wrote the script with his brother, Jonah, gave a very surprising, politically incorrect answer.

“I don’t like to talk about messages so much with films, because it’s a little more didactic,” the acclaimed filmmaker said. “The reason I’m a filmmaker really is to tell stories, and you hope that they will have resonance for people, and for the kind of things you’re talking about. What I loved about Jonah’s original draft, and we always retained this, was the idea of blight, the idea of there being an agricultural crisis, which has happened historically, if you look at the potato famine and so forth. We combined this with ideas very much taken from Ken Burns’ documentary on the Dust Bowl. I spoke to Ken at great length, and availed ourselves of his resources, because what struck me about the Dust Bowl was that it was a manmade environmental crisis, but one where the imagery, the effect of it, was so outlandish we actually had to sort of tone it down for what we put in the film. The real point is, they’re nonspecific.”

Nolan’s answer speaks more truly to the movie’s message than many understand.

Our responsibility to care for our planet is clear and obvious, but where many people go wrong is that their immediate response is to get the government involved to regulate the environment. This turns an innovation solution into a political problem, which almost never results in anything good. Big government is inherently corrupt.

Nolan continued, “We’re saying that in our story, mankind is being gently nudged off the planet by the Earth itself. And the reason it’s nonspecific is we don’t want to be too didactic or political about it. That’s not really the point. For me, it goes back to something Emma [the movie’s producer and Nolan’s wife] said earlier, which is my excitement about the project was expressing a potentially extremely negative idea that is out there I suppose, in the sense of the planet having had enough of us, and generally suggesting we go somewhere else, but that being a great opportunity, an exciting adventure. There’s something I found very winning about that.” They’re not saying the earth is literally speaking to us. To put it a different way, environmental circumstances in INTERSTELLAR have forced mankind to move on. This is a very different approach compared to most Hollywood filmmakers.

For Christopher Nolan not to jump on the left-wing environmentalist bandwagon seems to be a very bold move and shows great integrity in how he treats his work. What many people are missing is that Nolan isn’t as worried about what we’re doing on the earth as much as he is about what we’re not doing in outer space, among the stars. That’s perhaps the real point of his movie.

Be sure to read our full review of INTERSTELLAR here.