Is Of Kings and Prophets Trying to Reinterpret the Bible? 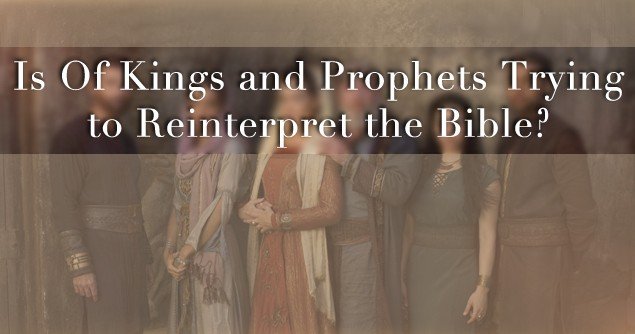 Is ‘Of Kings and Prophets’ Trying to Reinterpret the Bible?

OF KINGS AND PROPHETS, a failed attempt to capitalize on the success of recent Bible based movies and TV show premiered on ABC Tuesday evening. The first episode unfortunately confirmed skeptics’ suspicions that it would stray from the actual biblical account of David’s rise from lowly shepherd to revered king, and King Saul’s fall from grace into a power hungry king. The basic storyline is accurate. However, the fictitious subplot with Merab pledged to marry Mattiyahu (and their secret trysts behind Saul’s back), so the twelve tribes of Israel can finally unite, is ABC’s feeble attempt to over-sexualize a good story in hopes they can sell it to viewers. According to ABC, the original episode was so explicit, they could only release that version online.

While this might be enough for most viewers to grab for the remote, I’m wondering if this is indicative of a much larger problem. The most poignant scene of this new drama is between Samuel and Saul. Samuel, chastising Saul for not following God’s command declares, “I’m the prophet!” while Saul replies, “and I’m the King!” I couldn’t help but ask myself if this is what we have become as a culture, a crowd that wants the king, but ignores the prophet? Isn’t that what they did to Jesus when they demanded Barabbas’s release rather than Jesus’? Didn’t the Prophet die for no other reason than for a king who selfishly put his own hunger for power ahead of doing what was right, along with a so-called disciple who claimed to follow Jesus yet allowed a few shekels of silver cloud his judgment, selling the real King out to the highest bidder?

Isn’t that what we are seeing today, both on our television screens and in reality, trading righteousness for a king who promises power and money in exchange for a simple vote for president?

In an earlier article I wrote titled “Fuller House and A New Age Of Family Friendly Television (or is it?)” I spoke about a similar trend in the reboot of Full House. The original squeaky clean story of widowed Danny Tanner struggling to raise his children in the wake of the death of his wife, enlisting the help of his brothers Jesse and Joey brings little to bear on the reboot. With over-sexualized children turned adults and crude jokes in every episode, I shook my head in bewilderment, wondering why producer Jeff Franklin messed with the good thing he had in the 80s and 90s. Then it hit me: television is a mirror of the current culture in which we live.

No one can deny times have changed. The past ideals of what makes good television has now been marred by sexy subplots and gory violence, the Cleaver family replaced by the likes of the Dunphy clan in Modern Family, and the newest family the O’Neils all bowing to the god of money in the hopes their network will emerge victorious with the highest ratings? Righteousness is now openly mocked, right has become wrong, wrong has become right, and the world is having trouble separating fact from fiction. It doesn’t have to be that way!

If television really is a reflection of current culture, Christians need to look at the King they are serving, both on the screen and off.

UPDATE: It is our pleasure to share that OF KINGS AND PROPHETS has been pulled from ABC’s TV schedule permanently. This shows that the power of the media can be determined by viewers like us and you. Thank you for your dedication to not supporting immoral shows like this one!