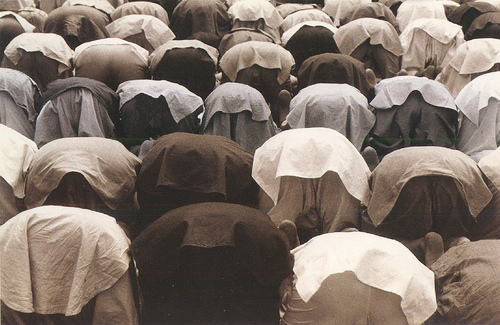 A Michigan jury has acquitted four Christian evangelists of disturbing the peace at a June 18 Arab festival in Dearborn, where they passed out Christian literature on a street corner outside the festival.

The Dearborn police charged the four men even though a video of the arrest appeared to show clearly that they were just peacefully handing out literature at the time.

Dearborn reportedly has a large Muslim population, many of whom apparently are trying to impose Islamic “Sharia” law on all the citizens there. Judging by the actions of city officials and the city’s police force, they have succeeded, despite the jury’s ruling.

Sharia law forbids Non-Muslims, including Christians, from proclaiming their beliefs to Muslims, and Muslims are not allowed to leave Islam, on pain of death.

If this arrest of the four Christian evangelists is not imposing Sharia law, what is?

Dearborn Mayor Jack O’Reilly has defended the arrest of the Christians, saying that the festival site is designated as a “special event site” and is not considered open to the public.

That comment does not take into consideration, however, the fact that a video shows the Christians were clearly arrested outside the festival on a public street corner.

The mayor’s office did not return MOVIEGUIDE®’s call requesting further comment from him.