Millennials, the VMA’s and a New Wave of the Sexual Revolution 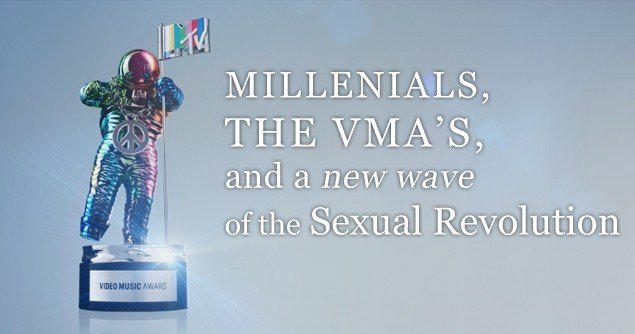 Millennials, the VMA’s and a New Wave of the Sexual Revolution

Provocative dance moves, gyrating hips and outlandish attire were just some of the highlights of this year’s MTV Video Music Awards. From the opening performance of Nicki Manaj’s  “The Night is Young/Bad Blood” mash up with Taylor Swift, to Miley’s performance of “Dooo It,” the VMAs did not disappoint in its hopes to try to push the envelope. This year, Miley Cyrus hosted the event, announcing award presenters while trading verbal assaults with Nicki Manaj, swimming in spaghetti for a selfie and having yet another wardrobe malfunction, all done to push the no longer existing public boundaries between appropriate and inappropriate public behavior.

News flash, Miley, the audience was not amused. Actually, they seemed more engaged with Justin Bieber’s tearful performance than they did with your attempt to show your insignificant bare breasts yet again.

Even so, it wasn’t any of that that disturbed viewers the most. It’s the apparent lines that have yet been blurred as to what is acceptable when it comes to gender and sexual identification. From Swift’s proclamation that, “It’s great to live in a world where boys can play princesses, and girls can play soldiers”, to Cyrus’s eye popping attire, sex played a huge role in the VMA’s. In her performance of “Dooo It” Cyrus’s performance opened with a team of drag queens grabbing their crotches and ended with Flaming Lips’ frontman Wayne Coyne shooting confetti out into the audience in between Cyrus’ legs.

All antics aside, one message was clear: it’s anything goes when it comes to Millennials’ attempt at self-expression.  This is only the beginning. Brace yourself; a new wave of the sexual revolution is on the horizon.

Korin Miller, author of the recent article “Miley Cyrus Identifies as Pansexual. But, What Does That Mean Exactly?”, interviewed Cyrus about her new sexual orientation. Cyrus said: “I am literally open to every single thing that is consenting and doesn’t involve an animal, and everyone is of age,” she said. “Everything that’s legal, I’m down with. Yo, I’m down with any adult — anyone over the age of 18, who is down to love me. I don’t relate to being boy or girl, and I don’t have to have my partner relate to boy or girl.”

Miller also wrote, “’Increased awareness of pansexuality can likely be attributed to the millennials’, Jean Twenge, PhD, a millennial researcher, professor of psychology at San Diego State University, and author of Generation Me, tells Yahoo Health. It seems to be linked to the generation’s desire for individualism.”1

Out of all of Cyrus’s psychedelic, revealing attire, one theme seemed to permeate every outfit—a set of brilliant blue eyes, no doubt a symbol of her (and others’) sexual awakening.

Yes, Miley, your narcissism is boring. If you want to be free:

“So if the Son sets you free, you will be free indeed.”

Michelle S. Lazurek is a Bible teacher, an author a speaker and a pastor’s wife. A member of the Advanced Writers and Speakers Association, she loves to write about how faith and culture collide. Her work has appeared over 70 times in places such as Charisma Magazine’s website and the Upper Room. For more information, please visit her website at www.michellelazurek.com.