Why Did the Oregon Shooter Target Christians? 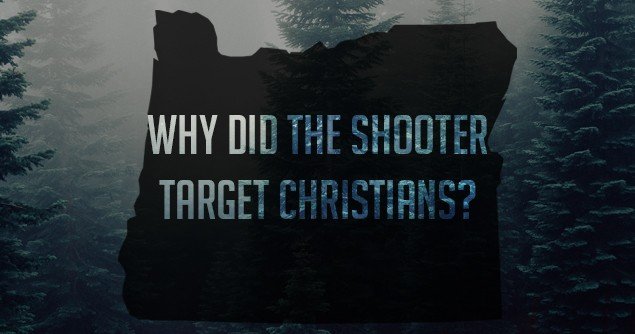 Why Did the Oregon Shooter Target Christians?

Another mass murderer is now claiming he deserved a girlfriend. This one apparently asked people if they were Christian before killing them. What America needs is not gun control but self-control. In a civilized society, you don’t need schools guarded by heavily armed police. Citizens who abide by moral standards protect society. They don’t rob, rape or kill people because they consider such activity to be abominable. When the media attacks morality as being outdated, judgmental and intolerant you’ll get a lot of self-centered people lacking self-control. Without moral absolutes, what’s wrong with mass murder? A young murderer can write a manifesto declaring his own concept of morality. He can decide “social justice” requires that he have a girlfriend. Denied “justice,” he can pronounce his sentence on society. Sadly, the concept of morality often presented in the media indicates that young men and women in their twenties can expect a life of good friends, fun times and free sex. When a young American loner doesn’t experience this new American dream he feels cheated. People can get angry when they feel cheated. If warped enough, their idea of justice can be violent. Movies and television don’t have to directly teach violence to help create unstable young men. Immorality alone weakens the foundation on which a civil society is built. Think about it. Someone considered a very “civil” person will be honest, polite, considerate and law abiding. An “uncivil” person will likely be rude, vulgar, untrustworthy and disrespectful of authority. The very apex of incivility is to plot and carry out an act of mass murder. Not every child who watches vulgar, promiscuous movies and television shows will go nuts and become a mass murderer, but many of them will reject absolute moral standards. They may become vulgar and promiscuous. They may father children they don’t want. If they choose to marry they may struggle with being a faithful husband and father. Society deteriorates when moral absolutes are abandoned. It becomes less civil. As civility subsides the frequency of mass murders increases. We shouldn’t be surprised. It’s common sense. Movies and television can encourage civility or incivility. Young people can choose civil or crass entertainment. The American dream used to be LEAVE IT TO BEAVER-style intact families. The expectation was to get married, have a sound marriage, raise children, and one day have grandchildren — as the dream gets passed to the next generation. The “modern family” replaces this dream with all kinds of less desirable options. The entertainment industry has the opportunity to encourage further incivility, or to change America for the better. If the media can sell billions of dollars worth of sugar water surely it can make civility look more desirable than incivility. In the days of LEAVE IT TO BEAVER, school shootings were unheard of. In the days of THE BIG BANG THEORY, they’re almost a monthly event. We all know the carnage is not over. We’ve come to expect it. We hope it won’t be our children or grandchildren, but like a lottery of horrors we know from our current culture that more tragedies are to come. It need not be this way. The cure is obvious. It’s revival. Revival transforms culture by freeing people from their lusts and their selfishness and creating civil citizens intent on serving God. God’s will for America is not more mass murders, more unwed births, divorces and fatherless children. Such is the will of Satan. God’s will is for a media — and an entire culture — that promotes civility.