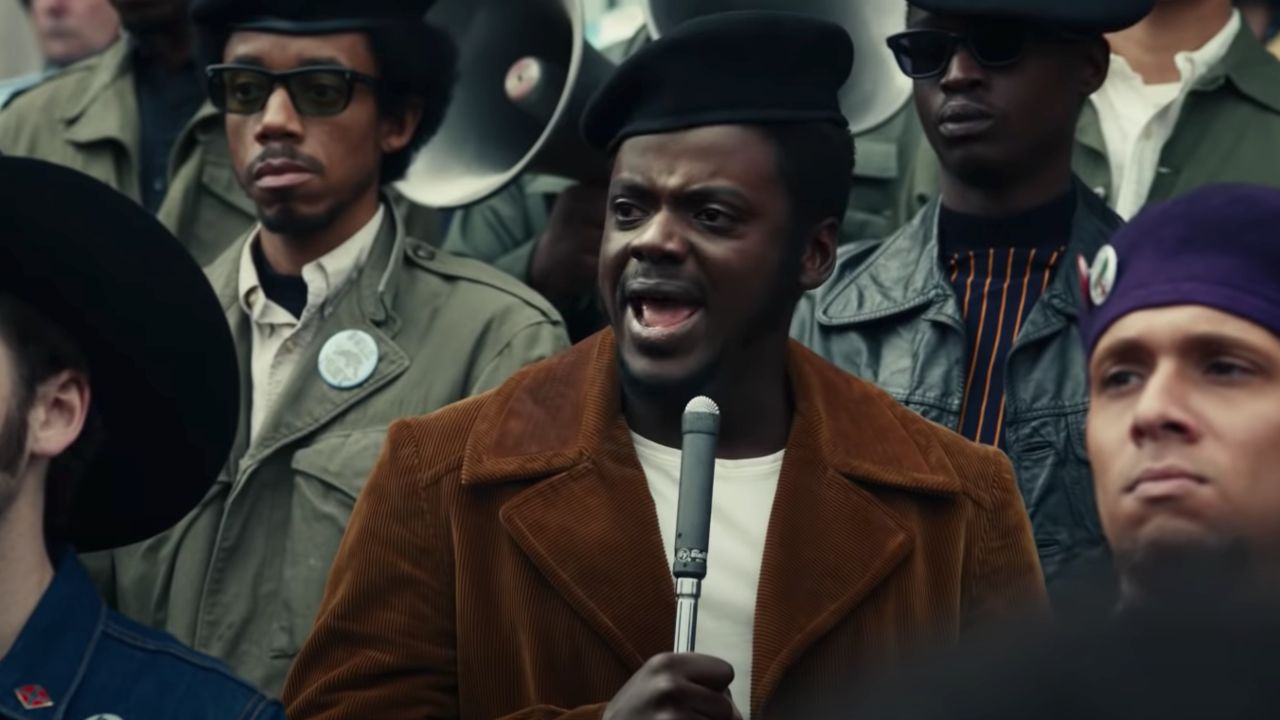 There was a disturbing ad the other day in the Hollywood Reporter touting Netflix’s Black Panther movie JUDAS AND THE BLACK MESSIAH for awards at this year’s Oscar ceremony on Sunday April 25.

The movie, which focuses on the leader of the Chicago Black Panther outlet, Fred Hampton, and the FBI informant who allegedly drugged him so state police could shoot him while he slept, has been nominated for six Academy Awards, including Best Picture, Best Original Screenplay and Best Actor for Daniel Kaluuya, the British actor who plays Hampton.

The Hollywood Reporter ad included two quotes from Hampton in the movie.

The other quote is from a speech Hampton gave in real life and which the movie depicts, “Wherever there’s people, there’s power.”

To gain recruits to the Black Panther Party, the real-life Fred Hampton and his Back Panther comrades set up a school breakfast program for poor children and free health clinics in Chicago. He also tried to unite black, white and Puerto Rican gangs to support the Black Panther Party’s political and social programs. As he attracted people to his cause, Hampton lectured and gave classes in Marxist, anti-capitalist ideology and activism, sometimes using fiery, violent anti-police rhetoric.

Thus, early on in the movie, JUDAS AND THE BLACK MESSIAH, Hampton quotes the words of the brutal Chinese communist dictator Mao Tse-tung, who wrote, “Political power grows out of the barrel of a gun.”

Of course, the ad for JUDAS AND THE BLACK MESSIAH doesn’t mention these quotes from the movie. Nor does it mention that the policies of Hampton’s Marxist idol, Mao, led to the biggest mass slaughter in human history, where up to 70 million people in China starved to death or were murdered and where nearly one billion more people were oppressed! Mao’s demonic attack on human life and liberty occurred, of course, after he took away most of the guns his victims personally owned.

Hollywood is a business, and the people running Hollywood are in the business of selling things. At its best, Hollywood sells wholesome entertainment that the whole family can enjoy.

With JUDAS AND THE BLACK MESSIAH, however, Netflix and the movie’s writer, director and producer, Shaka King, who studied under radical black filmmaker Spike Lee, are selling violent Marxist revolution. Of course, Netflix, King and their comrades in the mass media of entertainment, including the “news” media, would like to mute the violent, radical nature of movies like JUDAS AND THE BLACL MESSIAH and of Marxist groups like the Black Panther Party.

To its credit, the movie does show Fred Hampton saying violent things like his exhortation to the crowd to kill all police officers. However, at the end of the movie, viewers are apparently supposed to be outraged and shocked that local and state police officers deliberately assassinated this radical socialist who had been publicly advocating their murder. The fact that the Hollywood Reporter ad for the movie uses an innocuous quote from “Chairman” Hampton in the movie about the power of the people, instead of his quote from Mao that “political power grows out of the barrel of a gun,” indicates just how deceitful the movie and the ad actually are.

Communist writer and professor Lawrence Ware, a member of the communist group Democratic Socialists of America, recently praised the movie in a New York Times article published on Feb. 16, 2021, titled “Is This the Most Radical Film Ever Produced by Hollywood?” Despite the title of his article, the words “Marxist” or “communist” do not escape Ware’s pen. Instead, Ware only says Fred Hampton had a “deep suspicion of capitalism.” Also, Ware’s article vaguely talks about “Blackness,” but he never defines it. He praises the movie’s Writer/Director Shaka King, however, for putting viewers on “the side of Black radicals,” then concludes, “Hampton and the Black Panther Party were always heroes to me; this is a film that does justice to their memory.”

The leftist revisionist history promoted by movies like JUDAS AND THE BLACK MESSIAH and by radicals like Saka King and Lawrence Ware is extremely dangerous. As we can see, it has turned from supporting equal rights to promoting actual violent Marxist revolution. Sadly, in a desperate attempt to promote “diversity,” Hollywood and the Academy of Motion Picture Arts and Sciences and the “news” media have ignored this disturbing aspect of movies like JUDAS AND THE BLACK MESSIAH. What will they choose to ignore tomorrow?