The 2015 Oscars: Focusing on the Good Despite Some Bad Choices 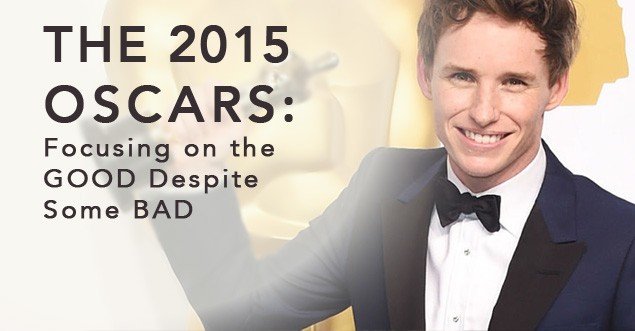 Focusing on the GOOD Despite Some Bad Choices

It took three hours AND forty minutes for the 2015 Academy Awards ceremony to hand out its Oscar® awards, which isn’t a record but certainly led to some moments that seemed to drag on and on and on.

There were a lot of touching speeches by winners about their families, including their parents. The best one was by Best Supporting Actor winner J.K. Simmons of WHIPLASH and the first SPIDER-MAN trilogy, who added at the end, “Call your mom. Call your dad. If you’re lucky enough to have a parent or two alive on this planet, call ‘em. Don’t text, don’t email. Call them on the phone. Tell them you love them and thank them and listen to them for as long they want to talk to you. Thank you, mom and dad.”

Another interesting part of the show was Neil Patrick Harris’ opening act, where he sang about the inspiring influence movies can have on people and society, and even noted that “moving pictures shape who we are.”

In fact, parts of his song almost sounded like something from Movieguide®’s 23rd Annual Faith & Values Awards Gala, although the MOVIEGUIDE(r) Gala featured all the diversity that the Academy Awards were criticized for not having.

Of course, movies can have an impact for both good or ill, but you can’t fault Hollywood for accentuating the positive rather than the negative, despite Jack Black’s funny interruption of Neil’s opening song where Jack complained about the business of the movie business.

Kudos also should go to Lady Gaga’s surprisingly excellent tribute to the movie THE SOUND OF MUSIC, which is celebrating its 50th Anniversary. Coming out to thank her was the star of the movie, Julie Andrews.

As is common to the show, there were some questionable political agendas.

First up was Supporting Actress winner Patricia Arquette, who made a plea for wage equality for women in America.

In reality, as Christina Hoff Sommers has noted (http://www.prageruniversity.com/Political-Science/Feminism-vs-Truth.html), their numbers don’t “take account for differences in occupations, positions, education, job tenure, or hours worked per week.” Nor do they take into account that “even women who work full time put in about 7 percent fewer hours than men.” Concludes Sommers, “Most workplace pay gaps narrow to the point of vanishing when one accounts for all of these relevant factors.”

Then, John Legend, winner for the song “Glory” from the movie SELMA, said the Voting Rights Act promoted in that movie is being “compromised” by Voter ID laws.

Also unfortunate, the Oscar telecast was marred by many bad choices.

Although all the nine nominees for Best Picture received at least one Oscar, the biggest winners last evening were BIRDMAN and THE GRAND BUDAPEST HOTEL, two movies that were themselves marred by lots of obscene language and some explicit lewd content. In fact, GRAND BUDAPEST HOTEL was particularly offensive. GRAND BUDAPEST HOTEL may be pretty, but never has so much outward beauty been used to advance so much perversity and obscenity.

Thankfully, that wasn’t the case for the two Best Animated movies, BIG HERO 6 and FEAST. Those two movies are so good, so heartwarming, so creative that Movieguide® prefers to think of them as the two biggest winners of the night.

Let’s focus on the movies and celebrities that inspire us, that lift us up.