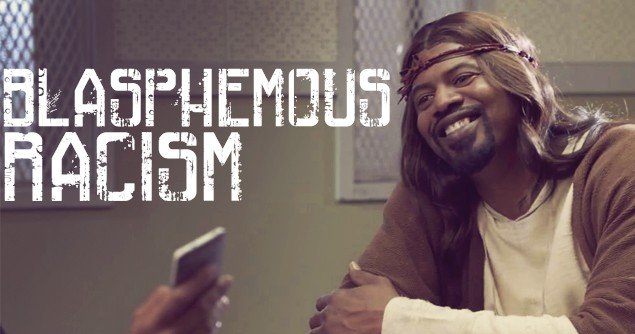 The program features a black Jesus character in an urban American setting. The program’s Jesus uses “f” words, smokes marijuana and drinks. One preview of the show, with bleeped out “f” words, advertises “the most anticipated comeback in history.” It also says viewers should “Get ready to feel the spirit of the glory of the most high,” with black gospel music in the background.

Movieguide® is asking people to e-mail John Martin, CEO of Turner Broadcasting, requesting he cancel the program. To take part in the campaign click here.

BLACK JESUS is not only an ugly attack on Christianity, but a horrible example of racism. It implies that, if Jesus Christ were black, he would be vulgar and use drugs and alcohol. It also presents the African American community he comes to using the worst of black stereotypes. All of this is topped with black gospel music.

In the United States, we are free to mock what we wish, including Christianity, but because you have the freedom to do something doesn’t mean it’s the right thing to do. Corporations typically have statements of purpose that profess a desire to behave responsibly.

On its own website, Turner Broadcasting claims, “We can’t begin truly to serve our customers until we listen to and support one another. We’ve made it a company priority to access the broadest possible range of perspectives, consider a multiplicity of voices and value cultural differences. It’s both a business imperative and a matter of respect.”

“Clearly,” Dr. Baehr said, “Turner Broadcasting wants to appeal to a much smaller audience that excludes the 123 million people who go to church every week and the 80% of the country who believe in the God of the Bible. Christians should seriously consider granting them their wish.”

Turner Broadcasting’s networks include CNN, TNT, TBS, Turner Classic Movies, the Cartoon Network, and TruTV. When considering watching any program on one of these networks, viewers might want to consider that Turner Broadcasting wishes to be known as “the company that ridicules Jesus.”