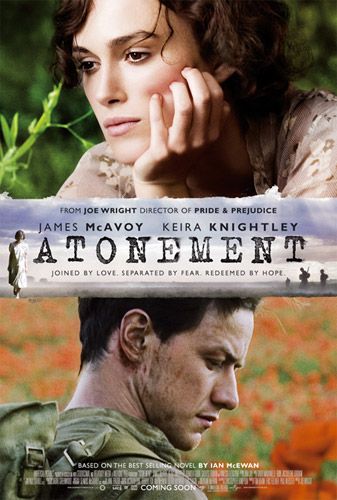 ATONEMENT stars Keira Knightley as Cecelia, the oldest daughter of the manor house who has grown up playing with the housekeeper’s son, Robbie. Her younger sister, Briony, interrupts Cecelia and Robbie in a sexual tryst. Later, Briony interrupts her underage cousin being raped and then tells the police that Robbie did it. Robbie goes to war to avoid prison, and Cecelia waits for him. He tries to get back to England during the World War II Battle of Dunkirk. Meanwhile, Cecelia works as a nurse, waiting for Robbie. And, Briony grows up to recognize the error of her ways and wants desperately confess to what she’s done.

ATONEMENT is very well made. The casting, performances and setting are impeccable. The good news is that the movie confronts false witness and shows the impact that jumping to conclusions can have. Regrettably, it depicts some very emotional, steamy sex scenes, even though the characters are partially clothed. Also, there is strong foul language and some pretty gruesome war and hospital scenes. Finally, no character seems to accept the atonement available by grace only through Jesus Christ, despite the movie’s provocative title.

(B, PaPa, AbAb, C, LL, VVV, SS, N, A, D, M) Somewhat moral, but light, worldview that deals with lying and doing the right thing, confused by possibly condoning sexual promiscuity outside of marriage and underage sex with one Christian church service and one group of soldiers singing hymns, but neither event has any impact on the rest of the movie; 21 strong obscenities and three light profanities; some very strong violence includes young girl falls into water wherein she could drown, severe wartime violence as the British troops try to make it out of France at Dunkirk during World War II, somewhat gory hospital scenes include dripping blood with open wounds and arms missing, and soldiers dying; very provocative unmarried sex scene, man sends crude note about oral sex, and chocolate mogul fornicates with underage girl; woman in underwear and upper male nudity; lots of alcohol; lots of continual smoking; and, lying, bearing false witness rebuked, and the Gospel seems to have little on these people’s lives.

ATONEMENT is neither a movie about salvation nor a great English period piece about pride and prejudice. Rather, it is a somewhat toned down version of LADY CHATTERLY’S LOVER.

Keira Knightley plays Cecelia, the oldest daughter of the manor house who has grown up playing with the housekeeper’s son, Robbie. Her younger sister, Briony, has a crush on Robbie and even jumps into a lake daring him to save her.

As the movie opens, Briony is looking out the window and sees Cecelia strip down to her undergarments and dive into the fountain right in front of Robbie. This looks like a very romantic, provocative scene, but the movie cuts to the scene from Robbie and Cecelia’s point of view, where Cecelia is diving in to recover part of an expensive vase. In the next scene, Robbie is trying to write a note to Cecelia apologizing for breaking the vase. Rather than sending the right note, he sends a typewritten appeal to have oral sex with her that he thought he had thrown away. He gives the note to Briony to carry to Cecelia. She reads it and tells her cousin, Lola, that Robbie is a sex maniac.

When Robbie comes to dinner that night, he finds that the note has aroused Cecelia’s passion. They passionately fornicate in the library, only to be interrupted by Briony. When Briony goes looking for her cousins, she finds her cousin Lola being raped by Paul who owns a chocolate factory that supplies chocolate to all the British troops. She mistakes Paul for Robbie. The police come to investigate, and Briony swears that Robbie raped her underage cousin.

Robbie goes to war to avoid prison. He tries to get out of France and back to England during the Battle of Dunkirk to find Cecelia. Meanwhile, Cecelia has left her family and works as a nurse, waiting for Robbie. Briony grows up to recognize the error of her ways and wants to confess to what she’s done.

ATONEMENT is very well made. The casting, performances and setting are impeccable, and it is quite astonishing to see how each character ages by being played by an actor or actress looking so much like their previous childhood identities.

The good news is that the movie confronts false witness and shows the impact that jumping to conclusions can have. Regrettably, the movie depicts some very emotional sexual scenes. Even though the characters are mostly clothed, these scenes are extremely steamy. Also, there is strong use of the “f” word and other foul language and some pretty gruesome scenes of battle and wounded soldiers. One man speaks while part of his skull is blown off.

A group of soldiers sing hymns and a pastor delivers a terrific sermon in a church scene, but no one else in this movie seems to be accept the love and atonement available only through Jesus Christ. Briony never seems to find the forgiveness she seeks for her false witness. One would have hoped there would have been real atonement and real forgiveness in a movie set in WW II using such a provocative religious title.