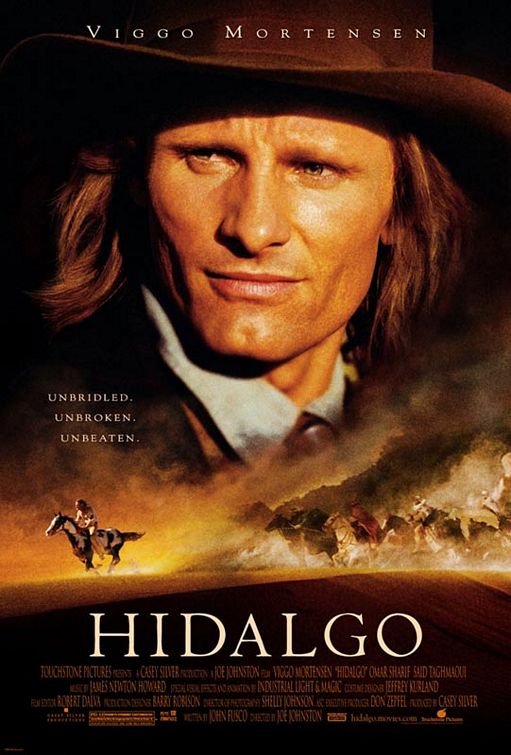 HIDALGO is a modern twist on traditional cowboy pictures based on the life of Frank T. Hopkins, a trick rider in Buffalo Bill’s Wild West Show, and his horse Hidalgo. A visiting sheik is furious that a mixed breed horse and mixed breed man would claim to be the fastest in long distance racing. Everyone in Buffalo Bill’s show chips in $1,000 so that Frank and Hidalgo can enter a 3,000-mile race around the Persian Gulf. On the boat, Frank meets a British couple also entered in the race. The race turns out to be more than just endurance, stamina, and speed; it is a cultural battle between the Arabs, the English, and, of course, Frank.

Two aspects of this movie suggest extreme caution. One is the violence, which includes horses being pierced by pikes and a beheading, and the other is touting the American Indians as better than the Muslims and the Christians. HIDALGO is beautifully shot, and the acting is very good. The plot, however, meanders, and tighter editing would have made it a four-star movie, although that would not have fixed the moral and spiritual problems.

(PaPa, FRFR, Ab, BB, L, VV, AA, DD, MM) Pagan worldview touting false religious ideas from American Indians which also denigrates both Islam and Christianity and solves the plot problem through an Indian chant and visions of the Ghost Dance, as well as many moral points made, including love for your neighbor, sacrifice, and perseverance; three obscenities; lots of action violence, including Indians shot pointblank, the massacre at Wounded Knee, horses pierced by pikes, swashbuckling battles, man beheaded and head falls in front of hero, part of man’s hand shot off, man condemned to castration, and lesser violence such as falling off of horses and stunts; no sexual activity but light discussions of sex and man condemned to castration; no nudity; drunkenness several times; smoking and perhaps some hallucinogenic; and, blackmail, gambling, betrayal, and theft.

HIDALGO is a modern twist on a traditional cowboy picture. It’s based on the life of Frank T. Hopkins; a credit summarizing his life appears at the end of the movie.

However, according to the Los Angeles Times article “Long Trail of Lies” by Bobbie Lieberman (2/17/04):

“There’s another take on the hero of the coming-soon movie Hidalgo: Frank T. Hopkins was not the greatest long-distance rider ever to jab his toe into a stirrup. Not even close. He was a counterfeit cowboy and gifted spinner of Old West yarns who lived in the industrial East and worked as a subway tunnel digger, harbor diver and circus horse handler. Disney may tout Hidalgo as ‘based on a true story,’ but, according to a headstrong posse of fact-finders, the only thing Hopkins ever galloped across was the vast plains of his imagination.”

The story opens with Hopkins as a dispatch rider for the U.S. Army. He has to deliver a message to the soldiers at Wounded Knee on Dec. 9, 1890. One of the Indians speaks to Frank, and it’s clear that Frank is part white and part Indian, which becomes a major plot point later in the movie. As he’s riding away, he hears gunfire and returns to find all of the Indians massacred, a few shot dead before his eyes.

Cut to Frank as a trick rider in Buffalo Bill’s Wild West Show. Depressed by the destruction of the West and the Indians, Frank gets so drunk that he can’t even get on his horse. From a little scene at the beginning of the movie, the audience knows that Frank has won several cross country races, and Buffalo Bill has built up Frank’s reputation and that of his mustang, Hidalgo, to immense proportions. Two representatives of an Arabian sheik come to Buffalo Bill saying that their master is furious that a mixed breed horse and man would claim to be the fastest in long distance racing. Everyone in Buffalo Bill’s show chips in $1,000 so that Frank and Hidalgo can enter the Ocean of Fire, a 3,000-mile race around the Persian Gulf. (The Los Angeles Times also notes that there was no Ocean of Fire race.)

On the boat to the Arabian Peninsula, Frank meets a British couple who are also entering the race. The wife has her eye on Frank. As soon as Frank gets there, he and his horse Hidalgo are ridiculed as mixed breeds. The race turns out to be more than just endurance, stamina, and speed; it is a cultural battle between the Arabs, the English, and, of course, Frank. Furthermore, it is a racial battle with the English and the Arabs dismissing his mixed breed horse and himself. Finally, the race is a religious battle where Christianity and Islam are both portrayed as rotten, and visions of Indian ghost dancers help Frank through the desert. Thus, Frank does not fly the Stars and Stripes of the United States of America in front of his tent but the Indian ghost dance flag.

The sheik’s daughter falls in love with Frank. When he is caught touching her innocently, he is almost castrated. The Englishwoman pays a rogue sheik to kill some of the other riders, attack the support camp, and attack Frank and Hidalgo. People are beheaded, and cruelty abounds. Hidalgo gets a spear through his side, but Frank nurses him back to life and continues the race.

HIDALGO has some strong moral elements. Frank is a good guy who rebuffs the advances of the women. He helps his enemy and keeps his own counsel; his only flaw is his drunkenness.

There are two aspects of this movie, however, that suggest extreme caution. One is the violence, and the other is touting the American Indians as better than the Muslims and the Christians. All men have fallen short of the glory of God and need salvation. Also, the disdain for the pure breeding of the Arabs and the English creates a reverse racism.

Director Joe Johnston (JURASSIC PARK III, OCTOBER SKY, JUMANJI, and THE ROCKETEER) has clearly made better movies, which MOVIEGUIDE® has honored. HIDALGO is beautifully shot and the acting is very good. The plot, however, meanders, and tighter editing would have made it a four-star movie, although that would not have fixed the moral and spiritual problems.