A QUESTION OF FAITH 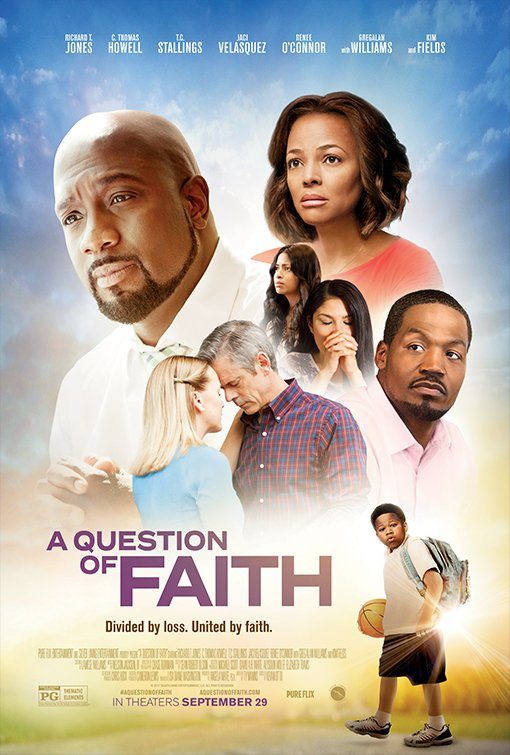 A QUESTION OF FAITH follows a pastor’s family who loses their son Eric in a horrible accident, the young girl who caused the accident and the family of the organ donor recipient. Each of these families struggle with faith amid the intense trials they face. However, when one member decides to accept God’s sovereign plan, and forgive those who wronged him, all three families will be brought together in a powerful way.

A QUESTION OF FAITH isn’t a badly produced movie. The acting is fairly good, the camerawork professional, and there are only a few moments that show budget constraints. That said, the movie sometimes feels like a long PSA about the dangers of texting and driving, and the good that being an organ donor can do. Positively, A QUESTION OF FAITH has a very strong Christian worldview about holding onto faith amid the incredible trials of life, seeing the broader plan God has, and repenting and turning away from anger. A QUESTION OF FAITH doesn’t have any major objectionable content in it. Because of the subject matter, however, light caution is advised for younger children.

(CCC, BBB, Cap, M) Very strong Christian and biblical worldview of faith, forgiveness, repentance, redemption, and trusting God’s sovereignty in life, with scenes in church, gospel songs and scripture verses featured, plus a light capitalist element; no foul language; no depicted violence, but a boy is hit by a car and his heart is donated to a sick girl; no sexual content; no nudity; no alcohol use; no smoking; and, racism, bad parenting but rebuked and repented, and married couple fights.

A QUESTION OF FAITH is about three families whose lives collide due to a tragedy and the events thereafter that will challenge everyone’s faith.

David Newman is associate pastor at a local African-American megachurch, preparing to take over the role as senior pastor from his father, Farnsworth. David loves his wife Theresa, and two sons, Junior and Eric. However, David finds himself neglecting his family’s needs because he’s distracted at the church due to a big construction job he’s overseeing.

Meanwhile, John Danielson is struggling with his debt-ridden construction company. It doesn’t help that John is a very angry, even racist man. John’s last hope at getting out of his family’s financial pit is his talented teenage daughter who’s about to sing for a music producer at their church. John pushes his daughter really hard, so when the day comes for his daughter Michelle to sing the song, she collapses on stage and is rushed to the hospital. At the hospital, they discover that Michelle has a serious heart defect and needs a new heart, or else she’ll die.

When David Newman is late to take his son Eric to his basketball game, Eric decides to walk. Along the way, a teenage girl, Maria Hernandez, makes the mistake to look at a text message while driving. She accidentally hits Eric.

At the hospital, the Newman’s are told that Eric is completely brain dead, and the damage is irreversible. After some time, the hospital asks the Newman’s if Eric’s organs could be donated to help others. David feels equal amounts of anger and guilt for what happened to Eric, since he was supposed to be there, and tells the doctors no, but Theresa convinces him it’s the right thing to do.

Eric’s heart ends up going to Michelle Danielson, and both families are forced to continue their lives, while Maria Hernandez faces serious jail time because of the accident. Their stories are just beginning, however, as David struggles to accept God’s will, and John Danielson fails to submit his anger and temperament to God even after his daughter’s life is saved.

Can these three families find faith amid so much pain?

A QUESTION OF FAITH isn’t a terribly produced movie. The acting is fairly good, the camerawork is professional, and there are only a few moments that show budget constraints. That said, at times the movie feels like a long PSA about the dangers of texting and driving, and the good that being an organ donor can do. Many of the scenes have didactic dialogue and the melodrama can be a bit tiresome, unless one is partial to soap operas. The story is sweet, though it must be said that the movie is quite sad, and isn’t for people looking for a fun, lighthearted movie. The ending, however, is quite powerful.

Positively, A QUESTION OF FAITH has a very strong Christian worldview about holding onto faith amid the incredible trials of life, seeing the broader plan God has, and repenting and turning away from anger. John Danielson also repents of his ungodly anger and racism, and his family’s transformation is inspiring. Many scenes involve prayer, worship and sometimes discussions about theological matters.

A QUESTION OF FAITH doesn’t have any major objectionable content in it, and even the darker moments are very tastefully handled. That said, because of the subject matter, a light caution is advised for younger children.

Watch A QUESTION OF FAITH: