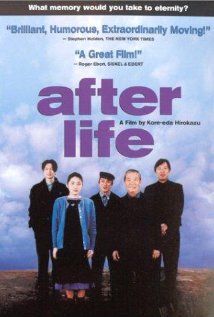 In AFTER LIFE, Japanese director Kore-Eda Hirokazu concocts a marginally engaging movie starting from the false religious premise, What memory would you take into the afterlife if you had to live with it for all eternity? Consisting mostly of talking heads, this quasi-documentary of ordinary but allegedly recently deceased modern Japanese people has the look of a high-school video and the depressing tone of a coroner's office.

False religious premise of dead people entering the afterlife without heavenly transformation or the presence of Jesus Christ, with humanistic overtones; no foul language; no violence; no sex; no nudity; no alcohol use; no smoking; and, fits of temper & one character is a prostitute who talks about a client.

In AFTER LIFE, director Kore-Eda Hirokazu presents his humanistic vision of heaven without God, whose mysterious workers are assigned to “process” a never-ending train of recently deceased people. AFTER LIFE seeks to show the answer to the morally bankrupt premise: Which memory would you take into the afterlife if you had to live with it for all eternity?

The means by which AFTER LIFE’S mysterious workers try to impart some sense of eternal joy to their “clients” is to shoot video footage of each one of them experiencing their best lifelong memory, and to send with them as they leave for some other mysterious “place.” After seeing this film, the viewer can conclude only that that place is hell. In what other setting would a subject be forced endlessly to contemplate a moment of earthly pleasure for all eternity?

Quite apart from the absurdity of the gratuitously humanistic premise, AFTER LIFE’S story is laughable. In the film which most resembles AFTER LIFE, Albert Brooks’ 1980 movie DEFENDING YOUR LIFE, Meryl Streep, and her fellow deceased souls enter a quasi-purgatory where they present arguments to justify their earthly deeds. The Bible says that God judges human beings after they die, and that Jesus Christ intercedes on behalf of and imparts his righteousness and justification to Christians by virtue of His shed blood. So a movie which presents people trying to justify their lives at least bears a semblance to what the Bible teaches about the true afterlife.

However, in Hirokazu’s movie, every soul goes to a mysterious hospital-looking institution, where long-suffering workers try to prod them to remember their best life experiences, so they can relive them endlessly in another “place”.

Appearing out of nowhere, with no antecedents, the unfortunate AFTER LIFE workers live a life resembling permanent film school students, who have to eternally cobble together amateur video productions with low budgets. They interview a series of Japanese people one after the other, seeking to draw out of them their best life memory.

One old woman remembers the time her brother took her to a Tokyo café to eat chicken rice. Another old man says he can’t remember anything good about his life. The problem with this movie is that, in its well-intentioned effort to invent heaven, it reduces eternal life to the endless, deadening repetition of the past.

Moreover, the cinematography leaves much to be desired. Overall, the film looks like an amateur production, with many lapses in lighting, and set design. In AFTER LIFE, heaven has all the appeal of a bankrupt hospital, with the obligatory striped walls, and the duo-toned hallways.

Mainly, however, the problem with this movie is that it summarizes people’s lives as if they were a set of earthly memories. Thus, a climax occurs when one of the mysterious heavenly young women workers confronts a heavenly young man worker with her intuition that he has chosen to remember another woman in his “life memory” as he moves on to the other “place.” She accuses him of denying her love forever, as if his eternally remembering someone else deprives her of existence itself.

In contrast, Jesus says, “I am the Life.” Wouldn’t AFTER LIFE be a whole lot more fun if it postulated the Truth: that Heaven is people contemplating the Lord of Life, in all His changeable and infinitely fascinating glory for all eternity?