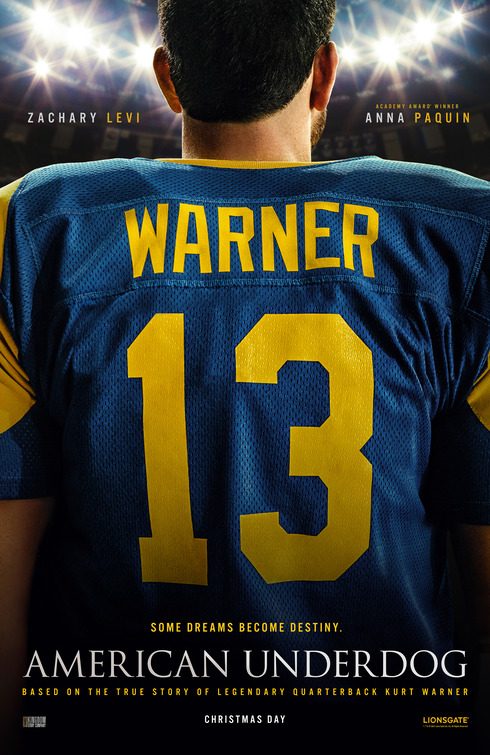 AMERICAN UNDERDOG is an uplifting, entertaining sports drama about the highly honored quarterback, Kurt Warner. It shows the challenges Warner overcame and is intentionally very clean and inspiring. At a young age, Kurt wants to be a winning quarterback, but he struggles making it into the National Football League. He falls in love with Brenda, a divorced woman with two children. They struggle until Kurt becomes a star in the Arena Football League, then becomes a popular starting quarterback in the NFL in 1998.

AMERICAN UNDERDOG is a well-plotted sports drama, with strong personal elements and heartwarming moments. The main characters and storyline are well crafted by the directors and lead actors. AMERICAN UNDERDOG has intense football violence that gives power to the story, but it’s not too intense. The movie is marred by some low-key foul language, which is often mumbled. AMERICAN UNDERDOG contains strong references to Christianity and faith. It stresses doing the right thing, having God as your Lord and Savior, praying for help at the lowest point, and much more. AMERICAN UNDERDOG is recommended for older children and up.

(CC, BBB, L, V, A, M):
Dominant Worldview and Other Worldview Content/Elements:
Strong Christian worldview with the mention of Christianity, faith and My Lord and Savior, but not of Jesus Christ with very strong moral pro-family elements of compassion and very strong believe in God’s Word and will for our lives
Foul Language:
Six light obscenities and two OMGs, though there may be more since all foul language is mumbled or downplayed
Violence:
Football violence, which is more intense when the main character plays in the Arena League, which thrives on more violence and action
Sex:
There’s some passionate kissing between future husband and wife before and after they’re married
Nudity:
No nudity
Alcohol Use:
Lots of beer drinking and bar scenes
Smoking and/or Drug Use and Abuse:
No smoking and no drugs; and,
Miscellaneous Immorality:
Discussion of previous adultery, boy is going blind from being dropped accidentally on his head by his father, money paid by coach of the Arena League for every touchdown, severe chastisement by coaches after games, parties with groupies, running out of fuel on lonely country road with future husband and wife and two children during the worst, coldest storm in years, but they all get to safety because of his efforts.

AMERICAN UNDERDOG is an uplifting, entertaining sports drama about the beloved and highly honored quarterback, Kurt Warner, and his wife and stepchildren. AMERICAN UNDERDOG is heartrending in spots, shows some of the challenges Warner went through and is intentionally very clean and uplifting, with strong Christian faith and values. In terms of plot development, it’s one of the Erwin Brothers’ best movies.

The movie opens with a young Kurt Warner watching a major football game and telling himself he wants to be as good a player as the most famous winning quarterback on TV. However, we’re told in a voiceover that millions of children play football at school and college, but only one percent make it into the American or National Football League.

Young Kurt practices in his backyard. When he gets to the University of Northern Idaho, he’s immediately recognized as a talented quarterback, but he refuses to trust the other players by staying in the pocket, which constantly angers the coach.

One night, his friend takes him to a cowboy bar where there’s line dancing. He sees and immediately is smitten by a woman named Brenda. He asks his friend later to teach him how to line dance. When he dances with Brenda, it’s clear they both like each other. However, in the parking lot, she tells him this isn’t going to work because she’s divorced with two children.

The next day, Kurt shows up with a rose and makes friends with her son, Zach, who is blind and limited because we learn later her ex-husband accidentally dropped him on his head. Brenda’s mother finds Kurt talking with Zach and immediately likes him. Brenda on the other hand tries to get rid of him, but Kurt keeps coming back.

Approaching graduation, Kurt’s goal is to be picked up in the draft by one of the major teams in one of the two football leagues. Eventually, he gets a call from the Green Bay Packers, but he only lasts one day.

When Brenda’s Christian father asks Kurt if he’s going to stick with her and provide for the family, he gets a job stocking shelves at a grocery store. He’s still depressed about his failure at getting drafted by a pro football team. However, the man who invented Arena football asks him to play in the league in Iowa. Kurt says Arena football is a circus, but the man says people like circuses. The coach leaves a wad of money for Kurt. He tells Brenda that you’ve gotta do what you gotta do until you do what you want to do.

During the coldest winter in a long time, with a miserable storm, Kurt decides to take Brenda and her children to his mother’s house because they couldn’t afford to pay the bills for heat at her house. They run out of gas in the highway, and he must walk several miles to beg for some gas. He gives whatever little money he has and promises to return the gas tank.

Reaching the end of his hope, Kurt joins the Arena League. He finds out it’s very different form regular football. He has to learn to move and pass faster. While he’s learning, the fans ridicule him. Eventually, he gets a call from the St. Louis Rams. The offensive coach thinks he’s too old, but the main coach says he came back after 14 years and believes Kurt will do the same.

Can Kurt make it in the big time? Will Kurt and Brenda get married? Will Kurt abandon her, like Brenda’s former husband abandoned her. Anyone who knows football knows the answer to these questions, but the movie makes it clear that Kurt goes from being an American underdog to getting a last chance to be a success.

AMERICAN UNDERDOG is a well-made, very well plotted sports drama with a strong personal element in the love affair between Brenda and Kurt Warner. The movie has many heartwarming moments, such as Kurt helping Zach and Brenda’s daughter, and Brenda and Kurt overcoming many obstacles. Kurt grows steadily throughout the movie, as does Zach. Zachary Levi of TANGLED and SHAZAM does a great job as Kurt Warner. Anna Paquin not only looks like the real Mrs. Warner, but she does a terrific job playing the role of Brenda. Some of the lesser roles are not as well realized, although some are. However, the main characters and main storyline are well developed.

AMERICAN UNDERDOG has some passionate kissing but no overt sex. There are after-football parties but no salacious behavior. There is the consumption of alcohol. There’s intense football action and violence which give power to the story, but it’s not too intense. The movie is only marred by a few low key obscenities and exclamations. However, these are often mumbled and quickly passed over.

Best of all, AMERICAN UNDERDOG has strong faith and values. It mentions Christianity, doing the right thing, having God as your Lord and Savior, praying for help at the lowest point, and much more, but there are no overt mentions of Jesus Christ. AMERICAN UNDERDOG is recommended for older children and up, especially professional football and Kurt Warner fans.