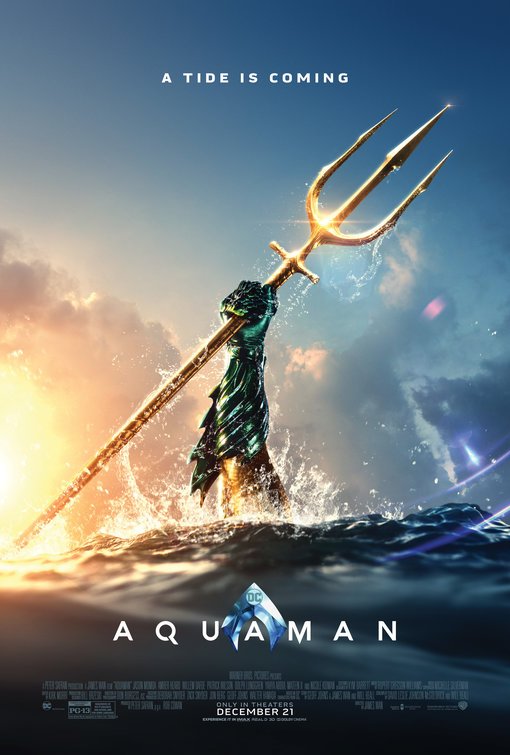 AQUAMAN is a fantastical superhero movie centering on the comic book character introduced in the movie JUSTICE LEAGUE. Arthur Curry is half human, half Atlantean. He’s also the rightful heir to the throne of the underwater kingdom of Atlantis, but currently his half-brother Orm reigns as the king. When Orm threatens to wage war against the surface world, Arthur must get involved and claim his right as the King of Atlantis. The people of Atlantis will only follow him, however, if he wields the ancient trident of Atlan, the first king of Atlantis. To get this trident, Aquaman must traverse the world and overcome many dangers.

AQUAMAN is very ambitious and creative, with impressive visuals, creative and bizarre characters and creatures. The movie is helped tremendously by a charismatic, enjoyable performance from Jason Momoa as Aquaman. The movie has some light mythological pagan elements, and a slight environmentalist bent, but the theme promotes moral courage, sacrifice and doing the right thing. There are some allegorical Christian elements in AQUAMAN. Caution is advised for older children due to some foul language and action violence.

(BB, CC, Pa, O, E, LL, VV, S, N, AA, M)
Dominant Worldview and Other Worldview Content/Elements:
Strong moral worldview promotes courage, fighting evil, love uniting the world, and doing what’s right, with strong allegorical Christian content [read full review for further description], and Christian messages of meekness, sacrifice, fighting for everyone, and people seek sanctuary in a church briefly in one scene, with light pagan elements that include references to “the gods” and some fantastical powers that can be either magical or technological, and some environmentalist elements motivate the villains worldview;
Foul Language:
15 obscenities (including two “s” words, and a couple uses of “bastard,” but in the context of its actual definition), one light profanity and a reference to urinating;
Violence:
Strong sci-fi action violence, with soldiers shooting plasma beams, guns and other weapons resulting in casualties, multiple characters are stabbed with a sword, hero is sliced up with a sword multiple times and some blood is shown in this instance, an epic underwater battle takes place with giant sea creatures that eat many soldiers, one scene involves very scary sea-beasts that swarm the heroes, villains chase heroes through an Italian village resulting in lots of collateral damage, and a character is pinned underneath some rubble;
Sex:
Implied sex between unmarried couple and child out of wedlock in the background story, and light kissing;
Nudity:
Upper male nudity, and female character’s outfit reveals some cleavage;
Alcohol Use:
Drinking at a bar, and characters leave tipsy;
Smoking and/or Drug Use and Abuse:
No smoking or drugs; and,
Miscellaneous Immorality:
Main hero decides not to save a bad guy he could’ve saved, resulting in the creation of an arch-nemesis, and a character steals someone’s boat (but she legitimately thought it was free).

AQUAMAN is fantasy action-adventure centering on the DC Comics superhero Aquaman/Arthur Curry. Arthur, played by Jason Mamoa, narrates at the beginning of the movie explaining how his mother, Atlanna, the Queen of the underwater civilization Atlantis wound up on the shores of Maine and was rescued by a human lighthouse keeper. Atlanna was fleeing an arranged marriage. When she fell in love with the lighthouse keeper and had a son they named Arthur, she decided to stay. Eventually, however, Atlanna’s betrothed relatives came after her. So, when Arthur was only a toddler, she was forced to return to Atlantis in order to protect him.

Jump to the present day, one year after the events of JUSTICE LEAGUE. Arthur has more or less embraced his role as Aquaman. During one particular heroic event, Aquaman saves a military submarine and a bunch of sailors from being slaughtered by a group of pirates led by David Kane, a generational thief mentored by his father. On the submarine, David Kane and his father attack Arthur, but are no match for Arthur’s powers, and David’s father dies from the fight. David now burns with vengeful hatred for Aquaman and will do anything he can to kill him.

In the underwater kingdom of Atlantis, the ruler, Arthur’s half-brother Orm, is trying to form alliances with other underwater kingdoms so they can wage war on the humans on the surface world who are polluting the oceans, their home. According to the ancient laws they still follow, Orm needs the alliance of at least four of the seven underwater kingdoms to wage war against the surface dwellers. One of the other kings, Nereus, agrees to join Orm, who’s also betrothed to Mera, the daughter of Nereus.

Mera, however, doesn’t agree with Orm’s war. Secretly, she seeks after Arthur to convince him to return to Atlantis and claim his rightful seat on the throne, since he’s the older brother of Orm. Arthur wants nothing to do with Atlantis, though, because his mother was executed for the actions that led to his birth. It becomes apparent, though, that Orm’s war will threaten everything Arthur loves. So, Arthur he realizes he has no choice.

To win over the people of Atlantis, Mera and Arthur embark on a globetrotting journey to secure the lost trident of Atlan, the first King of Atlantis, who wielded the trident that gave him power over all ocean creatures. The trident is so powerful that Atlan hid it in the most secret and deadly place possible so that the only person who could use it would be truly worthy of doing so.

Orm won’t give up his throne so easily, however. He works with David Kane to stop Arthur and his betrothed Mera, who betrayed him. Can Arthur find the courage within to be the hero the world needs?

To say that AQUAMAN is chalk full of mythological action would be an understatement. The movie overflows with wonderfully creative and bizarre visuals, like giant talking crabs engaged in a LORD OF THE RINGS level battle with sea-horse riding Atlanteans. One has to embrace the fantasy elements wholeheartedly to get past some of strangest characters moviegoers have yet seen in a superhero flick. Once you’ve done so, the movie is brimming with fun action and surprising heart.

Jason Momoa brings a needed lighthearted charisma to the character of Aquaman, something desperately needed for the DC movies which have tended to be darker and somber than audiences want. Director James Wan, who cut his teeth on a couple FAST AND FURIOUS movies, paces the epic adventure almost perfectly, despite the movie’s long running time, which admittedly could have been trimmed. The visual effects are colorful, vibrant and shockingly not too difficult to follow, until the final battle scene.

AQUAMAN, like the other DC movies WONDER WOMAN, and JUSTICE LEAGUE, relies heavily on mythology, and others like SUICIDE SQUAD had strong elements of magic. Thankfully magical occultism and paganism are fairly light in AQUAMAN. The origin of Atlantis, and the super ability of the Atlantean’s is revealed to be the result of scientific ambition gone wrong, thousands of years earlier, which changed the DNA of the Atlanteans and allowed them to survive under water. At this point, the movie contains a reference to evolution, saying that the technology caused some people in Atlantis to “de-volve” and other people to “evolve.” The society of Atlantis itself is pagan, with a couple brief references to “the gods.” While there’s an environmentalist angle of some in Atlantis wanting to wage war against surface-dwelling humans because of oil spills, whaling and pollution, this argument from King Orm plays off more as an excuse for him to gain more power, than an actual altruistic motive. Atlantis is a technologically advanced, but sociological backwards, civilization that’s far from perfect. This helps keep the movie from being a political attack against humanity and Western Civilization.

On the positive side, AQUAMAN has many strong moral themes of courage and protecting others. It also contains some allegorical Christian content that can be drawn from Arthur being a King of a people that aren’t ready to accept him as one. [SPOILER ALERT] At one point near the climax, Arthur emerges from the deepest part of the ocean having secured the lost trident, and Arthur’s most trusted mentor declares, “The King has risen.” Other allegorical Christian themes can be found in the fact that Arthur’s journey to becoming King isn’t one of strength and power, but humility. In the end, while he does become King to Atlantis, a character states that “A King fights for his nation. A hero fights for everyone.” This comment encourages Arthur to be more than just a king. Arthur is named after the legendary Christian King Arthur of Britain, and his hero’s journey during AQUAMAN reflects that inspiring redemptive tradition.

Arthur’s character does have some annoying flaws, however. For instance, as one of the more comical heroes in DC’s roster, Arthur can be crass and vulgar at times, though not nearly at the level of Marvel heroes like Star-Lord and Tony Stark. AQUAMAN also has several obscenities, and some of the action violence is intense. One particular scene has swarms of scary creatures attacking the heroes. Because of this, caution is advised for older children.

All in all, AQUAMAN is a fun, redemptive adventure for moviegoers open to accepting the movie’s fantasy elements, but for those looking for a more serious superhero movie, there are other fish in the sea for you.