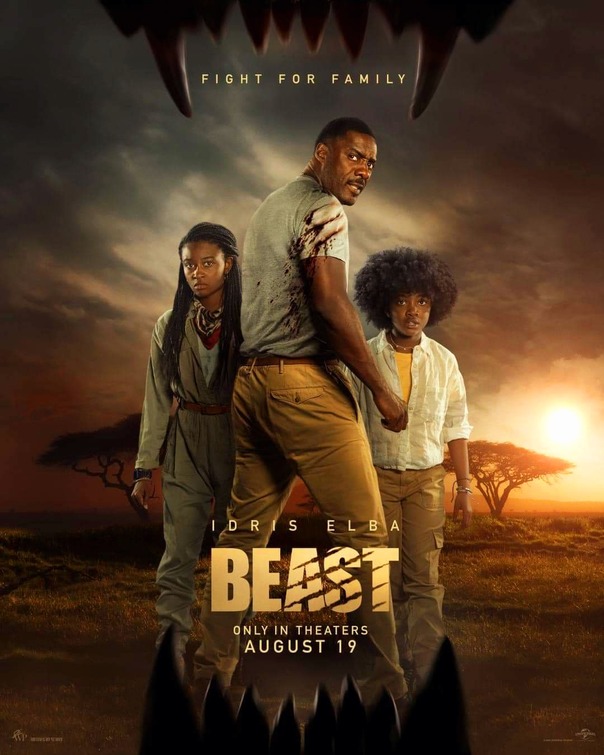 BEAST is an intense adventure movie. Idris Elba stars as Nate Samuels, an American doctor who visits his late wife’s homeland in Africa with his two daughters. They visit a nearby wildlife preserve run by Nate’s friend, Martin, who introduced Nate to his wife. Martin doesn’t know that some poachers have slaughtered one of two nearby lion prides and riled up the pride’s male leader. The lion has attacked a village. While Martin and Nate use Martin’s jeep to take a tour of the preserve with the girls, the lion attacks them. Can Martin and Nate fend off the rampaging lion?

BEAST tells a simple, straightforward story. The CGI the filmmakers use to show the lion attacks may not be convincing to all viewers. However, BEAST is a thrilling, intense, well-acted movie with strong jeopardy. The lion attacks are scary. Happily, BEAST has a strong morally uplifting, pro-family worldview. The father is a strong, positive character who risks his life for his two daughters. BEAST is rated R for intense, bloody violence, however. It also has some foul language. So, MOVIEGUIDE® advises extreme caution.

(BBB, C, LL, VV, A, M):
Dominant Worldview and Other Worldview Content/Elements:
Very strong moral, pro-family worldview as widowed lead character tries to protect his two daughters and his friend form rampaging man-killing lion, with one or two light references to Christianity and sacrifice is part of the solution to the movie’s plot problem
Foul Language:
Eight obscenities, two Jesus profanities and five light profanities (such as OMG or OG)
Violence:
Strong intense violence with images of bloody wounds and scratches such as poachers kill a pride of lions except for one male who then goes on a killing rampage, man is caught in a poacher snare and turned upside down hanging from a tree when the lion pounces (the camera shows its head lunging toward the camera), men discover a village where some of the villagers and one of their cattle has been killed by a rampaging lion, lead male’s friend searches for the lion in a swampy area with a little outcrop with a tree in the center when he turns and shoots at the lion coming toward him, lion then attacks man and his two daughters hiding for safety in a jeep vehicle, lion cracks passenger window but crashes through driver’s window and tries to get at the man and his two daughters, father finds himself under the jeep with the lion trying to get at him when he goes to retrieve a rifle, father kicks at the lion multiple times, girl stabs lion’s hindquarters with a tranquilizer dart, man stitches up man’s leg after his encounter with the lion near the tree in the swamp, character sacrifices his life trying to kill the lion, lion keeps stalking people, character dies in a fire, lion wounds girl’s side and father pours alcohol on the wound and applies makeshift bandage on it, lion mauls character trying to lead the lion away from other potential victims while character uses a knife for defense, images of people with bloody wounds that are slightly gory but not extremely so
Sex:
No sex
Nudity:
No nudity
Alcohol Use:
Some alcohol use in one scene when two men stay up drinking
Smoking and/or Drug Use and Abuse:
No smoking or drugs; and,
Miscellaneous Immorality:
Evil poachers hold man and his two daughters at gunpoint briefly before they go hunting for man-killing lion.

BEAST is an intense adventure movie about a widowed American doctor visiting his late wife’s African homeland and trying to protect his two daughters from a rampaging lion. BEAST is a thrilling, well-acted movie with a strong morally uplifting, pro-family worldview, but it’s rated R for intense bloody violence and has some foul language.

The movie opens at night in Africa with some poachers killing a pride of lions in an animal preserve, but the big male lion escapes. The poachers go after him, but he turns the tables on some of them. One man accidentally steps into a rope snare the poachers set for the lion. As he dangles from the nearby tree, the lion’s head lunges toward the camera.

Cut to the next day. Widowed American doctor, Nate Samuels, and his two daughters, Meredith and Norah, arrive at the preserve to visit his friend, a ranger at the preserve named Martin. The area is also the homeland of Nate’s late wife. So, it’s a chance for their daughters to visit the area where their mother grew up before she met Nate.

It becomes clear that there’s some tension between Nate and the older daughter, Meredith, who prefers to be called Mer. Before her mother was diagnosed with cancer, the parents had separated. So, Mer believes Nate abandoned them just when they needed him the most. Later that night, in private, Nate admits to Martin that he blames himself for his wife’s death. Since he’s a medical doctor, he feels he should have been able to tell that something was wrong physically with his wife.

The next day, Martin takes the family on a tour of the preserve. They see giraffes, antelope, rhinos, and elephants. They also visit a nearby pride of lions. Martin raised the two young male lions of the pride when they were cubs before releasing them in the wild. The males recognize Martin and visit with him while Nate and his daughters stand nearby with amazement. Martin notices that one of the female lions has a wounded paw. Martin tells his assistant, a fellow named Banji, to talk to the local vet in the area about it.

Martin next takes Nate and his daughters to visit a local village in the area. Strangely, no one seems to be around. Martin and Nate order Norah and Mer to stay near the jeep so they can check village living quarters. They find that the rampaging lion from the night before has killed and mutilated several villagers, plus one of their cattle.

The area isn’t conducive for Martin’s walkie talkies to be able to reach local authorities. So, Martin starts driving the jeep back to his outpost.

On the way back, they run into a villager seriously wounded by the lion. They stop so Nate can minister to the man’s wounds, but they hear the lion nearby. So, Martin takes his rifle to hunt the lion. He comes across a small swampy pond with an outcrop and a tree on it.

Back at the jeep, the villager dies. Then, Nate and his daughters hear a shot ring out. Nate leaves the jeep to call out to Martin. However, the lion chases him back to the jeep, where he tries to kill Nate, Norah and Mer.

Can Nate fend off the lion? Is Martin still alive?

BEAST tells a rather simple, straightforward adventure story. The story is a primal one of dark forces threatening a family. The CGI the filmmakers use to show the lion attacks may not be convincing to all viewers. However, BEAST is a thrilling, intense, well-acted movie with strong jeopardy. The lion attacks will scare younger viewers as well as older viewers, but all viewers will find it easy to root for the father and his two children.

Happily, BEAST has a strong morally uplifting, pro-family worldview. The father is a strong, positive character who risks his life for his two daughters. However, BEAST is rated R for intense, bloody violence. It also has some foul language. So, MOVIEGUIDE® advises extreme caution.