BEER FOR MY HORSES

"Too Much Country Crude" 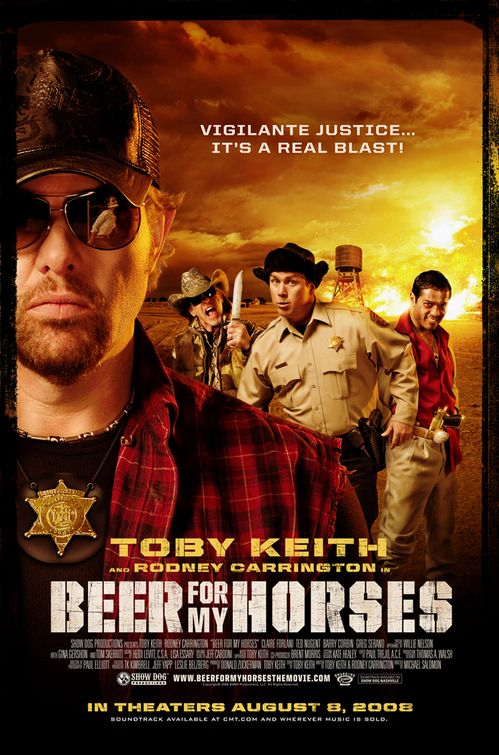 BEER FOR MY HORSES is a Texas/Oklahoma action comedy shot in New Mexico starring country music star Toby Keith, who co-wrote the screenplay. Keith plays Rack, a deputy sheriff in southern Oklahoma, who captures Tito, a crystal meth dealer from Mexico wanted by the FBI. Tito’s brother kidnaps Rack’s girlfriend Annie’s, who’s just returned home after living in Chicago. Against the sheriff’s orders, Rack and his two drinking buddies on the force, Lonnie and Skunk, take Tito to Mexico to exchange him for Annie. Along the way, there are multiple chances for sometimes crude country humor.

Toby Keith has an easygoing, appealing charm on screen. He and writing partner Rodney Carrington, who plays Lonnie, are ably supported by some professionals, including Tom Skerritt as the sheriff. Sadly, the movie has lots of foul language, some sexual innuendo, brief sexual nudity in one shot, and bathroom humor. Finally, there are at least four delays on the way to the final showdown in Mexico. Half of that material, especially the less funny stuff and the crude elements, could be cut. This could make room for an extra exciting twist at the end.

(PaPa, FR, C, B, LLL, VV, S, NN, A, DD, M) Strong, slightly mixed pagan worldview with some antinomian behavior, light positive Christian references to Jesus and the Bible, and some moral elements; about 57 obscenities, four strong profanities, eight light profanities, a couple of scenes with urinating men, an obscene gesture, and some bathroom humor, such as dog licks its private parts and dog passes gas; strong action violence includes man vandalizes truck, two gun battles, people are shot, fighting, man hits criminal heads with his elbow, man leaps onto speeding truck, woman hits her head on truck, gangster executes a man off screen while gunshot is heard, rock from slingshot stops gangster from fleeing, man holds gun to woman’s head; sexual content and innuendo includes implied fornication between protagonist and girlfriend even though protagonist goes to Sunday church service in one scene, viewers see man in underwear secretly leaving woman’s house to avoid her boyfriend, sidekick lives with his girlfriend, prostitute character attracts sidekick and is used for some attempted humor, exhibitionist girl in one scene, and sidekick mentions going home and getting naked with his live-in girlfriend; brief upper female nudity in one shot when woman in convertible lifts up her top to men in another vehicle, prostitute shows off her cleavage, and upper male nudity in a couple scenes; alcohol use; no smoking but Willie Nelson character rolls down window of his small truck and a bunch of white smoke comes out, implying marijuana use, and villains are a drug gang; and, villain kidnaps protagonist’s girlfriend.

BEER FOR MY HORSES is a Texas/Oklahoma action comedy shot in New Mexico starring country music star Toby Keith, who also co-wrote the screenplay. Although no relation to the music video, the movie is based on his popular song about the tradition of Texas lawmen. Sadly, there’s too much foul language and sexual innuendo here for family audiences.

Toby Keith plays Rack, a deputy sheriff in Jackson County, Oklahoma. One night, Rack and his friends in the department, Lonnie and Skunk, capture four men trying to steal some fertilizer for crystal meth production. The leader of the group turns out to be Tito Garza, younger brother of Manny Garza, a drug lord south of the border.

Tito is wanted by the FBI, but his brother Manny kidnaps Rack’s girlfriend, Annie, who’s just returned home after living in the big city, in Chicago, for several years. Manny tells the sheriff he’s willing to exchange Annie for his brother. Against the sheriff’s orders, Rack, Lonnie and Skunk take Tito through Texas and into Mexico to bring Annie back. Along the way, there are multiple chances for country humor, including an encounter with a bunch of weird circus performers led by a character played by Willie Nelson.

As he usually does, Toby Keith has an easygoing charm on the screen that will appeal to most average Americans, including country music fans and NASCAR followers. Contrary to popular thinking, such Americans live all over the country, including the East and West Coasts. Rodney Carrington, Keith’s writing partner on the screenplay who plays Rack’s buddy Lonnie, also is funny and natural on the big screen. They are ably supported by professionals like Tom Skerritt, Claire Forlani and Barry Corbin.

The script, however, is a little woolly, like a shaggy dog story. It could be tightened up a lot. For example, at a truck stop in Texas, Lonnie has a conversation with a prostitute, who tries to use her wiles to hitch a ride with them. Rack refuses, but she hides in the back of Lonnie’s fancy truck. Then, Lonnie damages the radiator of his truck when he runs off the road while ogling a pair of coeds in a passing convertible. That’s when Willie Nelson’s character shows up. He pushes their disabled truck to the camp of circus performers he leads. There, Rack and company have to spend the night while the circus mechanic fixes Lonnie’s truck. That’s a total of three delays on the way to the big showdown in Mexico with Tito’s brother, and that doesn’t include the a cappella musical number Lonnie performs with a group of dangerous looking guys in a rest stop restroom. Half of this material or more, especially the less funny and more crude parts, should have been cut and the Mexican showdown extended, to allow for an extra exciting twist in the third act.

Be that as it may, while some of the comedy and action are fun, somewhat clean and entertaining, BEER FOR MY HORSES contains lots of foul language, including some strong profanities. There’s also some sexual content, including lines of dialogue, implied sex between Rack and Annie, and a flash of nudity in one shot. Finally, the movie has some scatological humor. For example, Lonnie realizes that every time his dog passes gas, something important happens. This content does not jive with the church visit that occurs near the movie’s beginning.

MOVIEGUIDE® would like to see a much cleaner, tighter, more redemptive version of this picture. Also, Toby Keith deserves a bigger budgeted venue.