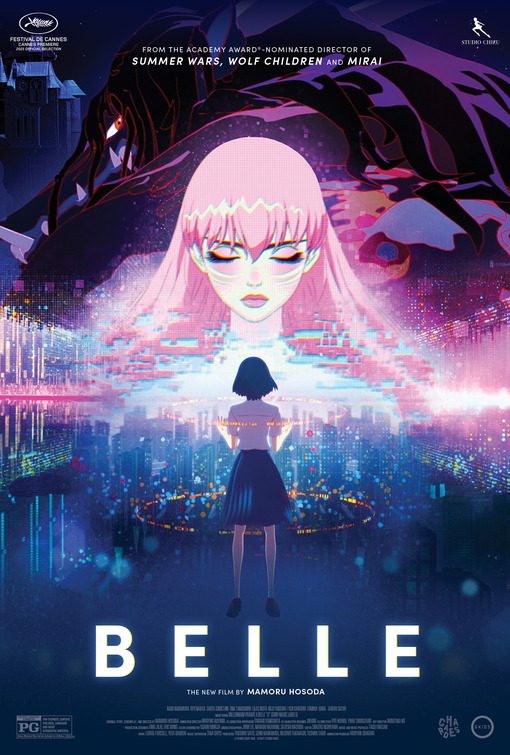 BELLE is an animated science fiction drama from Japan. Suzu is a sad, freckle-faced teenager still mourning her mother’s accidental death. Her friend is tired watching Suzu moping and crying all the time. So, she buys her an app to U, the internet’s biggest virtual world. U allows its five billion users to connect an avatar to their biometrics and become a new person. Suzu becomes Belle, the virtual world’s most popular singer. However, a monstrous avatar chased by vigilantes interrupts Belle’s big concert. Belle decides to uncover the beast’s true identity.

Based on “Beauty and the Beast, BELLE goes in unexpected serious directions. It has a strong Christian, redemptive worldview stressing empathy, love and authenticity. The heroine shows empathy to the Beast, curing his hostility. Also, a small women’s choir rehearsing a Christmas concert sings a short sacred choral piece in Latin from the Middle Ages, which urges people to give praise to God. BELLE is an emotionally powerful, uplifting animated movie. However, it merits caution for older children because of a few “d” obscenities, some action violence and a brief suggestive scene.

(CC, BB, L, VV, M):
Dominant Worldview and Other Worldview Content/Elements:
Strong Christian, redemptive, moral worldview stressing empathy, love, courage, authenticity, compassion, a theme about the tension between order and freedom, and standing against evil, plus a small women’s choir rehearsing a Christmas concert sings a short sacred choral piece in Latin from the Middle Ages, which urges people to give praise to God
Foul Language:
Three “d” obscenities and an “h” obscenity
Violence:
Strong action violence includes vigilantes chase and attack, a scary-looking beast avatar in a virtual world who they say cheats in virtual martial arts tournaments, vigilantes fire rays at people, vigilantes set fire to the beast’s castle after vandalizing the inside, teenage girl accidentally falls down several times, woman leaves her young daughter to jump into a raging river to save a little girl trapped on the far bank during a torrential rain, teenage girl stands up to a father who’s trying to hit his two sons, the father tries to pull the three apart when they hug together for shelter from his rage, and in trying to pull them apart, he cuts her cheek with a finger
Sex:
No sex, but some light chaste romance between teenagers
Nudity:
No nudity but three girls dressed in lingerie gush over a character they see in a virtual world on the internet
Alcohol Use:
No alcohol use
Smoking and/or Drug Use and Abuse:
No smoking or drugs; and,
Miscellaneous Immorality:
Jealousy.

BELLE is an animated science fiction drama from Japan about a sad freckle-faced teenage girl still mourning her mother’s accidental death who escapes into a vast virtual world on the internet but discovers her true self and learns to help and inspire others. BELLE is an emotionally powerful, uplifting animated movie with a strong Christian, redemptive, moral worldview about empathy, love and authenticity but merits caution for older children because of a few “d” obscenities, some action violence and a brief scene with three skimpily dressed girls.

Suzu is a shy, nerdy high school student who’s still mourning her mother’s accidental death when Suzu was only 6-years-old. After donning a life jacket, her mother had dived into a raging river to save a little girl trapped on the far bank during a torrential rain. However, her mother’s swimming prowess was unable to overcome the raging waters.

A little boy named Shinobu found Suzu crying one day. He grabbed her hand, saying he would protect her, meaning protect her from the bullies who made her cry, but Suzu imagined his words as a marriage proposal. Now, in high school, Suzu has a crush on Shinobu, who’s become really popular guy on campus. Suzu wants to tell Shinobu how she feels, but she’s too shy and embarrassed.

Suzu’s friend, Hiroka, is tired of seeing Suzu moping and crying all the time. So, she buys her an app to U, the biggest virtual world on the internet. U has more than five billion registered users. By connecting to the user’s biometrics, U creates a special avatar for them and brings out their hidden talents. In Suzu’s case, it turns her into a young, beautiful pink-haired singer. Suzu names her avatar Bell, because Suzu means “bell” in Japanese.

Suzu has fond memories of her mother teaching her to sing, but her singing voice has been silenced ever since her mother died. However, Suzu’s avatar on U turns Bell into the most popular singer in the virtual world of U. In fact, she sings so beautifully that her fans decide to call her Belle because belle means “beautiful” in French.

Hiroku acts as Belle’s promoter and manager in the virtual world. She arranges for Belle to perform a big concert, which is expected to attract 100 to 200 million viewers on the internet.

However, a monstrous avatar called the Beast and the Dragon, being chased by vigilantes, interrupts Belle’s concert. As the chase escalates, Belle decides to embark on an epic, emotional quest to locate the Beast’s castle, uncover his true identity and find out what makes him so angry and hurt. In the process, she uncovers her own true voice and learns to help and inspire others.

BELLE is a modern re-telling of the famous fairy tale, “Beauty and the Beast.” However, it goes in unexpected directions that get quite serious. For example, it has themes about mourning a parent’s death, broken communications between parents and children, the tension between order and freedom, and parental abuse of children. Suzu is so traumatized by her mother’s death that she and her father rarely speak to one another. To contrast with these serious themes, the movie has lighter themes of teenage boys and girls awkwardly trying to tell each other they like one another. These scenes are pretty chaste and filled with humor.

Ultimately, the movie’s main premise is that empathy heals broken hearts. The heroine shows empathy to the Beast and, when the heroine opens up to reveal her true self, people show empathy to her. As a result, the movie reveals what’s making the Beast sad and angry in the real world, Suzu empathetically helps the Beast in the real world, Suzu finds courage to reveal her true self, and Suzu re-establishes a personal connection with her father.

Also, one early scene shows Suzu visiting the small women’s choir that her mother belonged to before she died. In the scene, the four surviving women are preparing for a Christmas concert. They actually sing a short sacred choral piece in Latin, which originated from France in the 13th Century, which was used in festive celebrations. The Latin words urge everyone to give praise to God and ends with a strong Alleluya, which is Latin for Hallelujah.

Thus, like the Disney movie FROZEN a few years back, BELLE has a strong Christian, redemptive worldview with strong moral messages about empathy, love and authenticity. BELLE is an emotionally powerful, uplifting animated movie. Caution is advised for older children because of a few “d” obscenities, some action violence and a montage scene where three skimpily dressed girls gush over the Beast avatar and his strength.