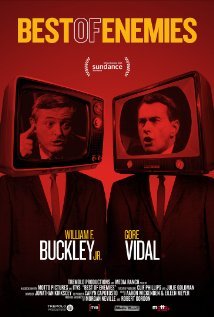 BEST OF ENEMIES is a lively documentary about the fiery 1968 debates on ABC between William F. Buckley and Gore Vidal during the presidential conventions that year. The year 1968 was a time of political and social turmoil in the United States. Because it didn’t have money to compete with its rivals, ABC decided only to do a 90-minute show each night on the Republican, Democratic conventions, with debates between Buckley and Vidal. At one point, the debates break down into name-calling after Vidal repeatedly calls Buckley a “crypto-Nazi.”

BEST OF ENEMIES claims that, because the Buckley-Vidal debates gained high ratings, TV news, especially coverage of politics, has descended to the level of vicious political rhetoric and ad hominem attacks. The movie claims (without proof) that news networks such as MSNBC and Fox News are examples of this degradation of TV news. Of course, name-calling has always been part of American politics, so the documentary’s contention here doesn’t hold water, for this and other reasons. BEST OF ENEMIES also has some strong profanities and overt sexual references. So, extreme caution is advised.

(RoRo, AcapAcap, C, P, Cap, Ab, AP, Co, HoHo, L, VV, SS, NN, A, DD, M) Romantic, somewhat anti-capitalist worldview suggesting that the capitalist urge for higher ratings in television has corrupted America’s political system, including the “news” media, with one man defending Christianity, America and capitalism and another man attacking them, plus protestors raise flag of Communist Vietnam and multiple references to homosexuality and some to cross dressing, bisexuality and transsexualism; two obscenities (including one “f” and one “s” word) and three GDs; newsreel footage of Vietnam War and 1968 riots in various places, including during the Democratic Party Convention in Chicago; scene from movie depicts apparent sodomy of a man by a transsexual man looking like Raquel Welch, and a pan shot of nude bodies from a Roman orgy portrayed in another movie, which also implies bestiality with a horse (but nothing really shown); rear male nudity in one scene, and naked bodies in a quick pan shot from another movie scene, though not much can be seen at the first viewing beyond a general impression; implied alcohol use; smoking and a reference or two to drug use among the counter-culture of the 1960s; and, insults and ad hominem attacks, plus man goads another man by calling him names.

BEST OF ENEMIES is a lively documentary about the fiery 1968 debates on ABC between William F. Buckley and Gore Vidal during the presidential conventions that year. The documentary tries to make a connection between those confrontations, and the confrontations that take place daily on Cable TV news outlets such as Fox and MSNBC, decrying both, but its argument isn’t totally convincing. Also, there’s some strong profanities, surprisingly coming from Buckley, who strongly opposed (for moral and cultural reasons) Vidal’s godless defense of the Sexual Revolution, including Vidal’s support for homosexuality (Vidal believed everyone was really bisexual).

The documentary opens by setting the stage for the debates between Buckley and Vidal.

The year 1968 was a time of political and social turmoil in the United States, from the Vietnam War to civil rights to the so-called “Sexual Revolution.” Because it didn’t have the money to compete with its rivals, CBS and NBC, ABC decided not to cover the Republican and Democratic presidential conventions in Miami Beach and Chicago gavel to gavel. They only set aside about 90 minutes for coverage, and added the debates between the conservative Bill Buckley and the radical liberal novelist Gore Vidal. Both men wrote frequent essays on politics, and both men had a unique way of speaking. Buckley, of course, co-founded the conservative magazine NATIONAL REVIEW in 1955 with Willi Schlamm, the editor of a small conservative publication called THE FREEMAN. Interestingly, both Buckley and Vidal ran unsuccessfully for political office at one point in their lives before 1968.

After the introduction, the documentary discusses the format for the debates and what happened during them, starting with the Republican convention in Miami Beach and moving on to the Democratic convention in Chicago. The Democratic Party’s convention in Chicago turned into some awful riots and confrontations between leftist, pro-communist demonstrators and the police run by Chicago’s gruff Democratic mayor, Richard Daley. Interspersed with the movie’s description of the conventions and footage of some of the debates between Buckley and Vidal are interviews with the two men, their biographers and other people, including Buckley’s brother, Reid.

It was clear during the debates that Buckley and Vidal hated each other’s guts. They each thought the other man was very dangerous to the body politic. Eventually, things came to a head during their discussion of the riots outside the Democratic Party convention. At one point, Vidal repeatedly called Buckley a “crypto-Nazi.” Enraged, Buckley replied, “Now listen, you qu*er. Stop calling me a crypto-Nazi, or I’ll sock you in the [GD] face, and you’ll stay plastered!” With his usual smug attitude, Vidal thought he won the debates at that point. While Buckley reportedly regretted calling Vidal a “qu*er,” he felt he was otherwise in his rights to object so vociferously to Vidal’s slurs against his moral character. “Them’s fighting words,” so the saying goes.

The final part of the documentary claims that, because the Buckley-Vidal debates gained ABC higher ratings, TV news, especially coverage of politics, has descended to the level of vicious political rhetoric and ad hominem attacks. It claims news networks such as MSNBC and Fox News are examples of the degradation of TV news. The movie also points out that, after ABC’s coverage, the major networks never again covered the primetime Republican and Democratic Party conventions gavel to gavel.

While it’s true that you don’t get much real, objective news from MSNBC, that’s not really true of Fox News, which has a core of excellent reporters that give a rather fair and balanced description of what’s happening, including what’s happening in politics. Also, Fox News seems to have more truly bipartisan debates than MSNBC. Of course, it is true, however, that MSNBC has its liberal programs, and Fox has its conservative programs. It’s also true that Fox has a lot of libertarian ideologues on its network, who don’t agree with what the Bible says on such issues as same-sex marriage and drug abuse. Finally, the news coverage on the major networks before 1968, and afterwards, isn’t all that much to cheer, looking at years past and looking at their coverage today. In fact, it’s rather homogenized and filtered, often through the prism of the partisan politics of the increasingly more radical Democratic Party. In fact, this is so true that even Fox News often succumbs to this problem, putting issues in the terms that leftist ideologues promote. This was clearly seen in Fox’s discussion of Bruce Jenner’s phony “sex change” operations.

In the end, therefore, the documentary’s contention that the Buckley-Gore debates, especially the name-calling incident, are symbolic of today’s news or today’s politics doesn’t really hold water. Name-calling has always been part of American politics, from the beginning. The attempt to ignore such name calling completely by “news” media is a fool’s errand. Lively debate actually encourages people to vote and become more involved in their society. The dry presentation of news on the three major TV networks hasn’t helped much, especially when it’s tinged with liberal and leftist bias. Also, in reality, as research has shown, the biggest lies, slurs and slanders come from the Left, not from the Right. In hindsight, for example, Gore Vidal’s defense of the communists in North Vietnam in his debates with Buckley proved to be really ignorant and naive. When the U.S. pulled out of Southeast Asia, the communists in North Vietnam and Cambodia murdered more than two million people and oppressed millions more. The documentary doesn’t even mention this evil result, but it leaves viewers with the false impression that Vidal’s criticism of American foreign policy in 1968 turned out to be correct.

BEST OF ENEMIES also contains several GD profanities, surprisingly coming from William F. Buckley, who considered himself a defender of Christianity and America’s Judeo-Christian heritage. In addition, there are references to Gore Vidal’s sexual politics. Vidal thought everyone was bisexual, but he also vociferously defended homosexual behavior while attacking the “sexual repression” of religion, including Christianity. He also wrote the script for the pornographic movie CALIGULA and novels like MYRA BRECKINRIDGE, a full-on LGBT satire of American society and traditional biblical values. BEST OF ENEMIES contains three brief scenes from the movies CALIGULA and MYRA BRECKINRIDGE, including a brief panning shot of a Roman orgy in CALIGULA and a transsexual man (played by Raquel Welch) engaged in sodomy in MYRA BRECKINRIDGE. Ultimately, Vidal’s views on sex became a harbinger of today’s sexual politics. So, he would be very pleased by the Supreme Court’s ruling on same-sex marriage, though he didn’t like the terms homosexual and heterosexual.

Because of its foul language and sexual content, and the movie’s ultimate failure of analysis, MOVIEGUIDE® advises extreme caution regarding BEST OF ENEMIES. It perhaps would be a better movie if the filmmakers had gotten some people on both sides of the aisle to comment on the movie’s contention about the news media and political coverage. Then again, its failures go beyond that, as the previous discussion of Vidal’s criticism of the Vietnam War showed.

At the end of the heated name-calling between Vidal and Buckley, news anchor Howard K. Smith interrupts for a break, saying that the infamous incident probably generated more heat than light. Ultimately, that’s what BEST OF ENEMIES itself eventually brings to viewers.