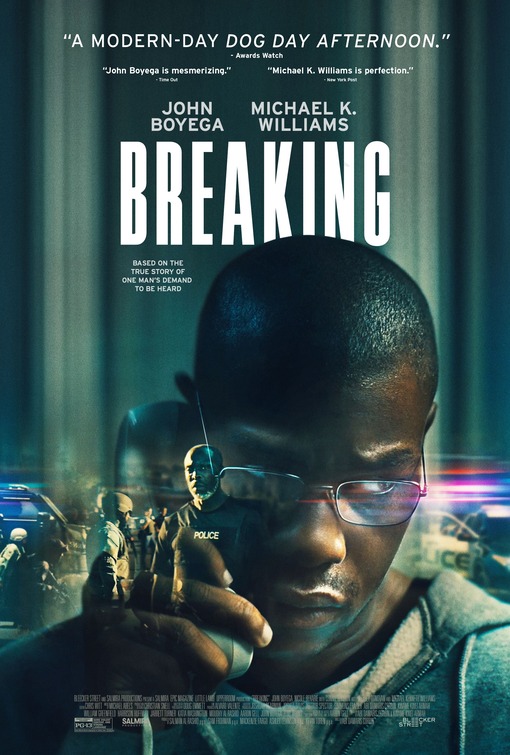 BREAKING is based on the true story of Marine Veteran Brian Brown-Easley who’s desperate for money. He enters a bank, declares he has a bomb, and holds hostage two bank employees. Brian struggles with mental health and reintegration as a civilian. The Veteran Affairs failed to provide the services he needs. He claims the VA wrongly used his benefits to pay for a college loan Brian denies he owes. Brian promises to let the hostages go if Veteran Affairs gives him what they owe him. The law enforcement officials are concerned with removing the threat. However, one detective and fellow Marine veteran tries to help Brian.

BREAKING has high-quality cinematography with excellent, interesting camera angles and scene transitions. An outstanding performance by John Boyega, who plays Brian, charms viewers into rooting for a positive outcome. However, BREAKING has a Romantic, politically correct worldview that blames alleged “systemic racism” for Brian’s plight. It also has some strong foul language. That said, the politically correct worldview in BREAKING is mitigated by overt examples of Brian’s Christian faith and his reliance on the Bible for strength.

BREAKING is based on a true story about a desperate Marine veteran who holds people hostage in a bank with the hopes of recovering money he believes due him from the Bureau of Veteran Affairs. The vet struggles with mental health issues and is unable to cope with a broken system at Veteran Affairs. He demands national attention to bring light to his issue while the stand-off with the FBI, a SWAT team and local police escalates. BREAKING is well-produced, with an outstanding performance by John Boyega as the Marine veteran and some references to the veteran’s Christian faith and reliance on the Bible for strength, but it has a Romantic, politically correct worldview that blames “systemic racism” for the veteran’s plight, plus some violence, strong foul language and a depressing ending.

BREAKING opens with the violent arrest of Brian Brown-Easley. Upon release, he calls his daughter Kiah to apologize for missing a visitation with her, but she’s still upset with him.

Brian returns to the rundown motel where he lives and stews. He becomes increasingly upset. Brian enters a Wells Fargo Bank. He announces he has a bomb. Completely unhinged, he decides to hold two employees, Estel and Rosa, hostage, while he allows the bank patrons to leave. Continually apologizing and showing some consideration, Brian is a well-mannered, likable psychopath.

Brian insists on speaking to a hostage negotiator so he can make his demands known. Hours pass without a negotiator on the scene. Tensions rise as the police presence at the bank builds. Brian calls a local TV station and speaks to a reporter about his situation. The Veteran Affairs owes him money. A series of flashbacks reveals that, instead of giving Brian his payments, the VA uses his money to pay off student loans he claims he doesn’t owe. Brian is denied assistance after he makes several attempts to straighten out the situation with Veteran Affairs. He grows frustrated beyond his breaking point with the overloaded and broken system.

Brian promises to let the hostages go if Veteran Affairs deposits the money they owe him into his bank account. The money owed to him amounts to under nine hundred dollars. What seems to be a simple solution spirals out of control until someone ends up dead.

BREAKING does a brilliant job showcasing the failure of a broken system which is meant to give America’s veterans proper care and resources for their service. As in the case of many over-regulated government run entities, the VA is often inefficient and inadequate. The movie raises awareness of the dire need of many veterans for both monetary and mental health assistance.

John Boyega gives an outstanding performance in BREAKING as the likable but quirky Brian. The cinematography is excellent and imaginative. The audience feels Brian’s frustrations, and even sympathizes with him. However, the movie falls short because it fails to explain the logic of Brian trying to solve his problems by holding hostage two innocent women who have nothing to do with Veteran Affairs. There’s no justification for willingly putting innocent people in harm’s way for our own needs. However, BREAKING puts the blame on alleged “systemic racism” for Brian’s plight. That said, the movie’s politically correct worldview is mitigated by overt examples of Brian’s Christian faith and his reliance on the Bible for strength.