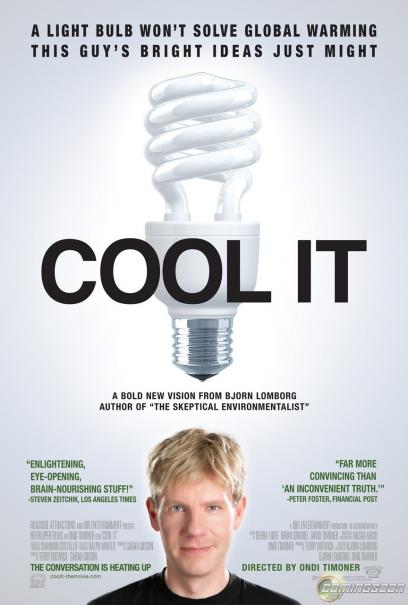 COOL IT is a documentary focusing on Danish scientist Bjorn Lomberg, who speaks fluent English. Lomberg is controversial, because he doesn’t accept the radical environmentalist hysteria among global warming proponents. In the movie, Lomberg shows that global warming may only cause ocean levels to rise about a foot in the next 100 years. He offers simple solutions to ameliorate those effects. At the same time, he proposes more practical, useful solutions to wean society slowly but effectively away from fossil fuels. For example, he takes a look at wave energy, fuel produced from algae, cheaper nuclear power plants using nuclear waste, and something called water splitting that could produce fuel cells. He opposes cap and trade, which he calls corrupt, as well as wind farms, conventional solar power and battery-run electric cars.

(B, CapCap, Ro, So, E, V, M) Light moral, strong pro-capitalist worldview trying to set the record straight on global warming by lowering the hysteria and attacking some popular radical environmentalist solutions and supporting solutions that make more sense to a Christian, capitalist worldview, but marred by a still somewhat Romantic, liberal, slightly socialist attitude about taking care of global warming, poverty and malnutrition with lightly environmentalist solutions that seem, however, far less expensive than the usual Neo-Marxist solutions put forth by misguided radicals like Al Gore, Barack Obama and the Hollywood Left, including Arnold Schwarzenegger; no foul language; a scary ad is shown where a girl is pummeled by winds, rain and desert allegedly caused by global warming but the ad is clearly rebuked as fear-mongering; no sex; no nudity; no alcohol use; no smoking or drugs; and, false accusation, an insult, fear mongering, and children have clearly been brainwashed by the antagonists in the movie but all are rebuked through the course of the movie.

Danish scientist Bjorn Lomberg, who speaks English fluently, has been a thorn in Al Gore and the radical environmentalist movement’s side because he doesn’t buy into their hysteria about global warming and “climate change.” Nor does he accept many of their alleged “solutions” to the problem like cap and trade, laws banning incandescent lightbulbs, the destruction of the oil industry, wind farms, or electric cars.

Although Lomberg accepts some of the alleged science about man-caused global warming, which he asserts probably will increase ocean levels by only about one foot in the next 100 years, he also speaks out in favor of more sensible solutions. Among the solutions he favors include inexpensive nuclear power plants re-using nuclear waste, splitting the hydrogen and oxygen in water to create fuel cells, wave energy, and algae power. Lomberg says these solutions will cost much, much less and be more effective than the other solutions his more radical fellow scientists propose.

The new documentary COOL IT focuses on Lomberg and his views on these subjects. In it, he offers solutions about global warming and the energy needs of developed nations like the United States, developing countries like India, and poverty-stricken nations like those in Africa. The European Union has proposed spending about $250 billion per year to curb its contribution to global warming. Lomberg says, however, that, with $250 billion annually, we could not only solve the global warming problem. We could also develop alternatives to fossil fuels and help people in poverty-stricken nations get electricity, education, clean water, and better shelter.

In COOL IT, Lomberg also advocates simple geo-engineering solutions to ameliorate the possible effects of global warming. Those solutions include creating more reflective surfaces in big cities with large populations that generate heat, dike systems like Denmark’s to stop ocean water flooding and plans for seeding clouds to make them reflect more of the sun’s rays. Lomberg says that, even if he’s wrong about the extent of global warming over the next 100 years, these cheaper solutions can help the world stop the worst effects while it constructs the energy alternatives to the fossil fuels that seem to be warming the earth.

Lomberg still accepts the idea of some man-caused global warming. Also, he is not a conservative. Thus, in COOL IT, Lomberg proposes spending taxpayer money for fighting global warming and helping poverty-stricken countries, though perhaps in a less radical, more reasonable manner.

Except for the last part, which is socialist, most of Lomberg’s scientific arguments and solutions make sense and come with a general attitude that’s more pro-capitalist than radically anti-capitalist like the watermelon environmentalists who are green on the outside and red on the inside. For example, Lomberg says we will still need fossil fuel cars for several decades. Thus, he doesn’t propose destroying the oil industry. And, he says that replacing the traditional incandescent bulb will do very, very little to stop global warming. At the same time, Lomberg challenges and actually dispels many false, hysterical global warming arguments, like a 20-30 foot rise in ocean levels, the extinction of the polar bears and the contention that the Hurricane Katrina disaster was caused by global warming.

COOL IT is an excellent document that eschews radical, global warming propaganda and provides genuine food for thought. Schools and teachers should show this documentary instead of Al Gore’s deceitful rant, AN INCONVENIENT TRUTH. The protagonist in COOL IT is a real scientist. And, there’s no sign in COOL IT of the biased, government funded, professorial ecology activists featured by Leonardo DiCaprio in THE 11TH HOUR.

There’s one very sad thing about COOL IT, however. The movie opens with Lomberg visiting young English-speaking schoolchildren in their government-run classrooms. All of the children clearly have been scared to death about global warming by their teachers and by ignorant environmentalist radicals like Al Gore and by clueless movie stars like Leonardo DiCaprio. MOVIEGUIDE® gives kudos to Lomberg and the filmmakers of COOL IT for showing how the radicals, the mass media and government bureaucrats have brainwashed people, including vulnerable children, who don’t know any better. Their documentary, which is based on a book by Lomberg, may not be perfect, but it could be a first step in informing the public about what is really happening. It also can start more intelligent discussions going that look at more practical, cheaper and more capitalist solutions to the modern world’s energy needs and poverty problems.