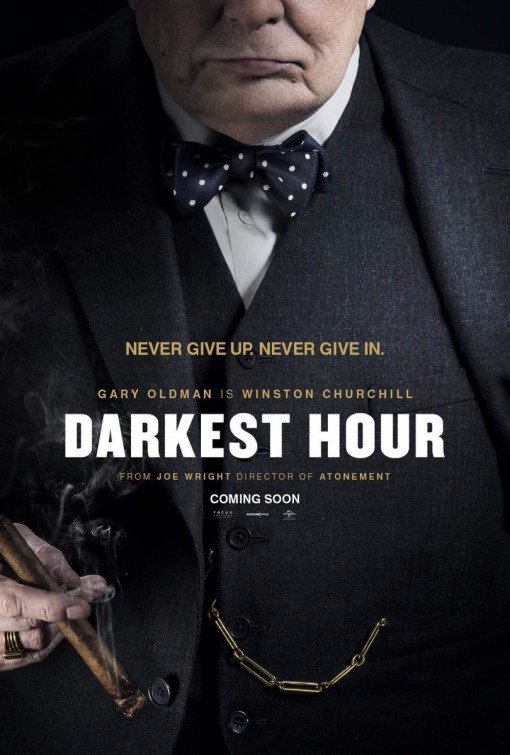 DARKEST HOUR is a suspenseful, patriotic historical drama about British Prime Minister Winston Churchill’s handling of the “miracle” at Dunkirk during World War II. The movie opens with Churchill becoming Prime Minister in May, 1940. At the same time, Hitler’s Germany launches an invasion of France. The French army retreats, and 300,000 British troops are trapped on the beach at Dunkirk. Some think Britain should begin peace negotiations with Hitler to save the British Army, but Churchill is not so sure. Meanwhile, he begins a risky plan to rescue the troops trapped at Dunkirk.

DARKEST HOUR does a great job building up suspense as Churchill decides whether to defy Hitler. In heavy makeup, Gary Oldman delivers a tremendous performance as Churchill. DARKEST HOUR contains two positive references to God and a reference to the need for a miracle to rescue the troops stuck at Dunkirk. However, it doesn’t mention the King’s call for a Day of Prayer and Repentance throughout the British Empire during the height of the crisis. Ultimately, it was God who rescued the British people during their DARKEST HOUR.

(BBB, PPP, C, L, V, A, D, M) Very strong moral, patriotic worldview about doing the right thing and never surrendering to evil, with some Christian, redemptive elements, including two positive references to God, and one reference to needing a miracle, but movie skips over the strongest Christian elements of the real historical narrative; one “d” word and one exclamatory “Good God,” plus two characters briefly discuss an obscene British gesture, which one of the characters says means “Up your bum”; light violence when bombs falling from a plane are shown, and a brief image of a corpse is shown; no sex; upper male nudity as Churchill sits in a tub; alcohol use; smoking; and, political machinations with some politicians selfishly looking out for themselves.

DARKEST HOUR is a suspense filled historical drama about British Prime Minister Winston Churchill’s handling of the “miracle” at Dunkirk in World War II, where thousands of British troops, almost the whole British army, were trapped on a beach in France by the Germany Army. DARKEST HOUR is an engrossing historical drama with a strong sense of suspense as historical events unfold, plus a rousing, uplifting sense of British patriotism, but it skips over the most miraculous parts of the actual story, which included a National Day of Prayer and Repentance declared by the King in the midst of the crisis Britain was facing.

The movie opens with Winston Churchill getting the call to be Prime Minister of Britain. However, to keep the political peace, he retains the previous prime minister, Neville Chamberlain, and his rival, Lord Halifax (whom Churchill calls Lord “Holy Fox”) on his cabinet. At the same time, on May 10, 1940, Hitler’s Nazi Germany began its invasion of France. Churchill tells his countrymen he thinks the French Army will stop the Germans, but he turns out to be very wrong. Then, Churchill gets word that more than 300,000 British troops are trapped on the beach at Dunkirk in France.

Chamberlain and Halifax think Britain should begin peace negotiations with Hitler to save the British Army, but Churchill is not so sure. He begins a plan to rescue the soldiers trapped on the beach, but the plan is extremely risky with little chance of success. Churchill has a tough decision to make. Will the King side with Halifax and Chamberlain or with Churchill?

DARKEST HOUR does a great job building up suspense as Churchill plans to rescue the soldiers trapped on Dunkirk while trying to decide whether to stand up against Hitler’s seemingly invincible army and air force or not. The resolution of Churchill’s dilemma regarding Hitler’s forces is a rousing patriotic moment where Churchill gives his first great speech to the British people. In heavy makeup, actor Gary Oldman (THE DARK KNIGHT RISES) delivers a tremendous performance as Churchill.

DARKEST HOUR contains a couple positive references to God and a reference to the need for a miracle to rescue the troops stuck at Dunkirk. However, although the movie shows the British King coming to Churchill’s support against Halifax, it doesn’t mention the King’s call for a Day of Prayer and Repentance throughout the British Empire during the height of the Dunkirk crisis, which led to some miraculous weather that grounded the German air force but enabled Britain to rescue its troops (see the article by Dr. Peter Hammond on the MOVIEGUIDE® website, “Dunkirk – Separating Fact from Fiction,”. Ultimately, it was God who rescued the British people during their DARKEST HOUR.