"Too Gruesome and Too Potty-Mouthed" 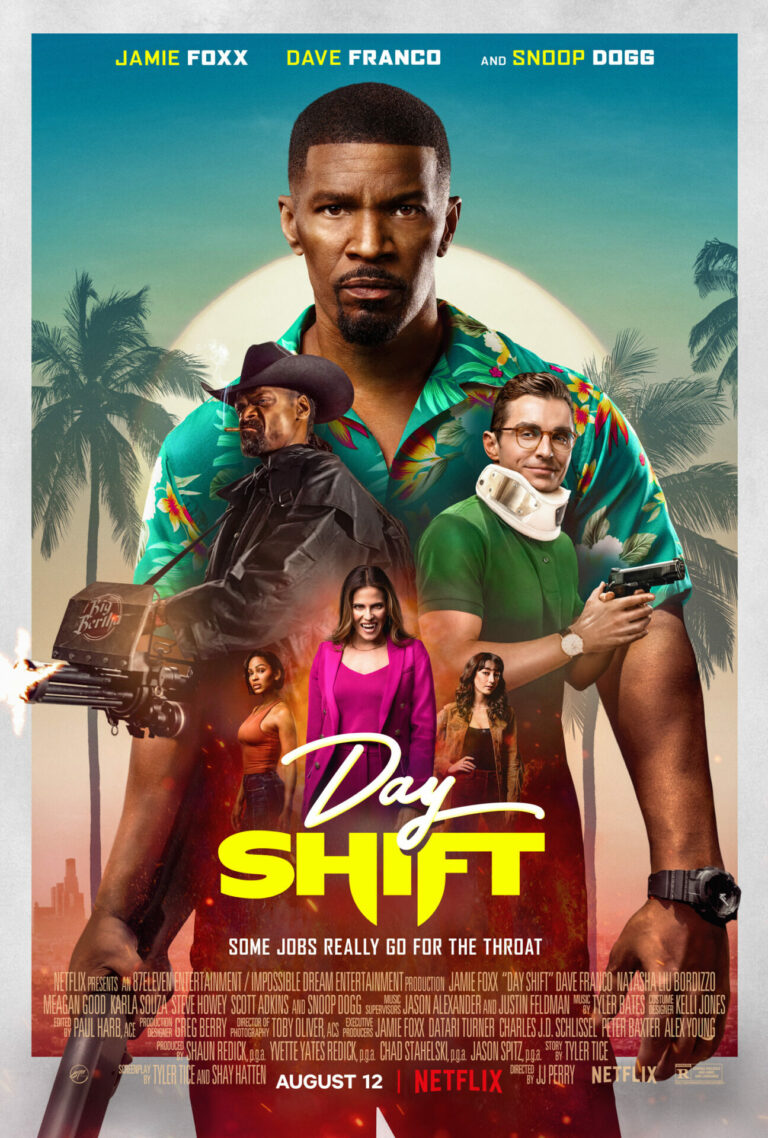 DAY SHIFT is an action horror movie streaming on Netflix about hunting vampires. It stars Jamie Foxx as Bud, a professional vampire hunter in Los Angeles who poses as a pool service worker. Bud must suddenly come up with $10,000 to pay for school tuition and braces for his daughter, or his ex-wife will move her to Florida. However, Bud runs afoul of Audrey, a powerful female vampire intent on creating a vampire army and taking over the city. When Audrey kidnaps and threatens his family, Bud recruits two new unlikely friends to storm Audrey’s stronghold and rescue his ex-wife and daughter.

Like the first two TAKEN movies, DAY SHIFT has a plot where an expert hunter must rescue family members from hostile forces. Otherwise, however, it’s an ultraviolent, bloody, gruesome action movie with a high body count. At one point, Bud’s friend “Big” John shows up with a powerful machine gun to mow down dozens of vampires. DAY SHIFT also has lots of foul language, including some “f” words and several strong profanities. It’s definitely an excessive, unacceptable piece of would-be “entertainment.”

(B, C, OO, LLL, VVV, A, M):
Dominant Worldview and Other Worldview Content/Elements:
Light moral worldview about hunting and killing evil vampires and rescuing a family, with an act of sacrifice, but the movie takes place in a bloody occult world of vampires and vampire folklore
Foul Language:
Constant foul language includes at least 91 obscenities (about 15-20 “f” words), three Jesus profanities, five GD profanities, three light profanities, vampire monster vomits blood, young man repeatedly urinates his pants while facing scary vampires, and hero advises rookie not to get a special vampire cleaning powder in his anus when he showers
Violence:
Lots of extreme, bloody, gory, gruesome violence includes vampire hunters repeatedly cut off and blow off the heads of vampires, vampires have black blood that spews when they are killed, at least one vampire vomits black blood, brutal gunfights, vampire hunters shoot dozens of vampires attacking them, vampire hunters stab and fight many vampires, one vampire hunter has a machine gun with silver bullets that he fires indiscriminately at groups of vampires, multiple groups of vampires jump and attack vampire hunters, one man is turned into a vampire and gets his head cut off, but he comes alive again and puts his head back onto his body and starts helping the hero get the other vampires and track down the female villain who kidnapped his daughter and estranged wife, vampire hunters have to yank out fangs of dead vampires in order to earn money for the kill, violent car chase occurs with a young teenagers in the good guy’s car, female villain several times crudely says she’s going to turn little girl into a vampire and make her kill her mother
Sex:
No sex
Nudity:
No nudity
Alcohol Use:
Brief alcohol use
Smoking and/or Drug Use and Abuse:
No smoking or drugs; and,
Miscellaneous Immorality:
The female villain is motivated by revenge, vampire villain kidnaps little girl to turn her into a vampire that will kill her mother.

DAY SHIFT, an action horror movie streaming on Netflix, stars Jamie Foxx as a vampire hunter in modern-day Los Angeles who must rescue his estranged wife and daughter from a powerful female vampire intent on creating a vampire army and taking over the city. DAY SHIFT is an excessive, ultraviolent, gruesome action movie about killing vampires and rescuing a family, with constant foul language.

The move opens with Jamie Foxx’s character, Bud Jablonski, posing as a pool cleaning worker with his own company, getting out of his van and entering a home. Immediately, he encounters an elderly, evil looking female vampire who attacks him. A bloody fight ensues, with Bud emptying many rounds from his shotgun into the vampire. Eventually, he successfully kills her.

Bud makes money by selling the teeth and artifacts of the vampires he kills. However, he could make more money if he could get back into the union/guild of vampire hunters.

After killing the elderly female vampire, Bud visits his daughter, Paige, who now lives with his ex-wife, Jocelyn, in their old house. Jocelyn informs Bud they owe money for Paige’s private school tuition and to get braces for Paige. She says, that, if Bud can’t get her $10,000 by Monday, she and Paige are going to leave Los Angeles and move to Florida to live with Jocelyn’s mother.

Getting back into the vampire hunter guild would make it easier for Bud to earn that much money. So, he asks his hunter friend, “Big” John Elliott, to help him get back onto the guild. The guild leader, however, hates Bud. So, he establishes two restrictions for Bud. First, he restricts him to only hunting vampires during the day. Second, to watch over him and make sure he doesn’t violate any rules, he assigns a young guild rookie and trainee named Seth, who’s been working in the accounting office and would like to stay there.

After returning from the day’s lucrative hunt, Bud gets a call from a powerful female vampire named Audrey. Audrey threatens Bud’s ex-wife and daughter, because the elderly vampire he killed was actually Audrey’s own daughter. Audrey had to leave behind her daughter in Eastern Europe to come to America, but, when she finally returned for her daughter, her daughter had become an elderly vampire.

Bud rushes to his ex-wife’s house but gets there too late. He runs to Seth’s place to get help rescuing his family but finds Seth has been attacked and become a vampire. However, Seth agrees to help Bud, and they recruit an outcast vampire named Heather that Bud has met. The three of them begin an assault on Audrey’s stronghold, but they’re heavily outnumbered.

Like the first two TAKEN movies, DAY SHIFT has a plot where an expert hunter has to rescue family members from hostile forces. Otherwise, however, it’s an ultraviolent, bloody, gruesome action movie with a high body count. At one point, Bud’s friend “Big” John shows up with a powerful machine gun to mow down dozens of vampires. DAY SHIFT also has lots of foul language, including some “f” words and several strong profanities. It’s definitely an excessive, unacceptable piece of would-be “entertainment.”