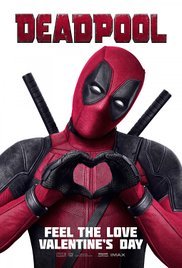 DEADPOOL is a comical action adventure set in the X-MEN franchise universe about Wade Wilson, a foul mouthed, murderous, ex-special forces soldier with super abilities who kills bad guys, but refuses to be labeled a superhero. Before Deadpool had super abilities, he was a mercenary with a beautiful girlfriend. After being diagnosed with cancer, he undergoes mutation experiments to beat the cancer, but the process badly scars his body, and gives him super abilities. Now, he’s on a mission to capture or kill the man who ruined his life. Meanwhile, two X-MEN members try to recruit Deadpool and get him to change his ways, but he never does.

The plot of DEADPOOL is mediocre at best. The only interesting element is the snarky attitude Wade exhibits and the breaking of the Fourth Wall. This becomes overused, however, AND tiresome. Also, the jokes are repetitive and hardly go beyond simplistic vulgar, lewd references. DEADPOOL is also filled with gratuitous sex, violence and vulgarity. DEADPOOL, the character and the movie, stands against all the values Marvel’s other movies celebrate, and it’s a terrible shame.

(PaPaPa, B, LLL, VVV, Ho, SSS, NNN, AA, MMM) Very strong pagan worldview extolling lawlessness, murder and all other forms of debauchery; one X-Men character is proper and rebukes some foul language and when a female villains breasts are exposed, the hero Colossus turns away until she fixes her shirt; nearly 100 obscenities (including over 60+ utterances of the F-word), seven profanities and a multitude of vulgar references to male and female anatomy; very strong gratuitous violence with bad guys getting shot, stabbed, cut in half, decapitated, and killed in many other ways, Deadpool cuts off his own hand in one instance, scenes of torture, main character is stabbed in the head and all his hands and legs broken, with many instances of blood splatter and gore; very strong sexual content, a montage of the main character’s sexual hedonism with his girlfriend includes depicted fornication, oral sex, sodomy, and many other sexual references, characters make up tragic childhood stories of molestation played for jokes, implied self abuse; full female nudity in a scene taking place in a strip club with pole dancers and provocatively dressed waitresses, brief frontal male nudity, brief female nudity in sex scene, upper and rear male nudity; moderate drinking; no smoking or drugs; and, lying, deception, kidnapping and murder encouraged, and disrespect for the elderly and the blind.

DEADPOOL is a comical action adventure set in the X-MEN franchise universe about Wade Wilson, a foul mouthed, murderous, ex-special forces soldier with super abilities who kills bad guys, but refuses to be labeled a superhero.

The movie begins with Deadpool taking on a group of bad guys on a freeway who are led by the villainous mutant Ajax. In true Deadpool fashion, Wade breaks the 4th wall and talks to the audience throughout, even making quips and jokes about the X-MEN franchise in which he is involved (some of the jokes regarding budgetary constraints from the studios are too similar to the THE MUPPETS remake, and not nearly as funny). Freezing the action, Deadpool tells the audience he wasn’t always a masked terror. In fact, this is a love story.

The movie jumps back a few years to when Wade was just a trashy mercenary. Falling in love with Vanessa, a prostitute he met at a bar, the equally perverse couple grows very fond of each other, but it’s discovered Wade has cancer throughout his body. A mysterious man approaches Wade and offers to let him be subject to experimental regenerative mutation that could potentially cure his cancer. Reluctant at first, Wade decides to spare Vanessa the grief of seeing him sick and leaves her to go through the experiments.

It turns out that the private company doing the experiments, led by a British mutant who goes by the name of Ajax, is actually trying to turn people into mutants with special abilities, so they can make them slaves to do their bidding. The process is a grueling, torturous experience, and Ajax, who takes special pleasure in torturing Wade, inadvertently scars Wade permanently into a hideous figure.

Eventually, Wade escapes Ajax’s prison with his new powers and abilities and dawns the masked identity of Deadpool to hide his scarred face. He’s now determined to capture Ajax so he can force him to fix his looks, so he can return to Vanessa and be accepted. Meanwhile. two X-MEN members, Colossus and Negasonic Teenage Warhead, try to recruit Deadpool and get him to change his ways (but he never does).

The plot of DEADPOOL is mediocre at best. The only element of interest is the snarky attitude Wade exhibits and the breaking of the 4th wall. This becomes tiresome however and overused. Additionally, the jokes are unsurprisingly repetitive and hardly ever go beyond vulgar sexual references. The action has moments of excitement, but the contrived stakes regarding Wades appearance feel superficial.

The worst part about DEADPOOL is also the reason it got made; the gratuitous sex, violence and vulgarity. Ryan Reynolds fought hard and long to bring an edgy R-rated DEADPOOL to theaters, and he definitely succeeds at that. There’s nothing heroic about DEADPOOL, other than the fact that he saves his girlfriend, and that’s totally fine by him. DEADPOOL, the character and the movie, stands against all the values Marvel’s other movies celebrate, and it’s a shame.