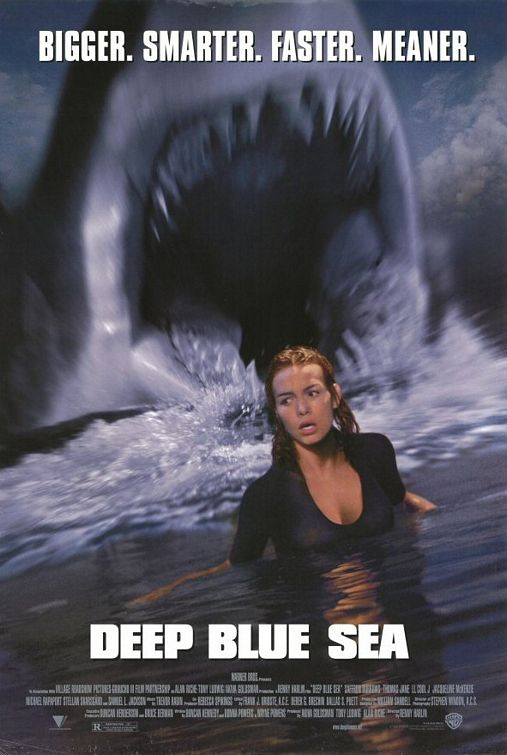 In DEEP BLUE SEA, three scientifically enhanced sharks endanger the people on a floating laboratory. DEEP BLUE SEA has a strong Christian worldview, centered on the Christian faith of the movie's most heroic character, but it includes plenty of R-rated obscenities and profanities and lots of gory, scary action violence.

Strong Christian worldview with moral elements where the strongest, most heroic character is a Christian who uses prayer & his faith in God to survive & to help others survive, plus pagan elements, especially in the use of foul language & gruesome action violence, & a couple anti-biblical elements, including the use of an "f" word in a prayer during a tense situation; 32 obscenities & 4 profanities plus an obscene gesture; extreme, intense action violence including shark bites off man's arm, shots of arm's bloody stump, shark flings man's body against glass, many shark attacks where several people get torn apart, swallowed, eaten, & bitten, with blood, & sharks get blown up into bloody pieces; no sex; no nudity but woman shown in underwear; alcohol use & Christian refers to his past bouts with liquor; smoking; and, lying rebuked, psychological blackmail rebuked & woman scientist rebuked for using unethical means to find a cure for senility.

In the past couple of years, Hollywood has released many movies that combine horror, science fiction and action in an ocean setting. These movies are primarily monster movies done in the mode of the ALIEN series, which is set in outer space. In such movies, a collection of misfits encounter a really scary monster in the confined corridors of a large ship or an experimental underwater facility.

Most of these movies, including such ones as SPHERE, DEEP SEA RISING and VIRUS, have been less than successful, artistically and financially. Warner Bros., however, has finally captured the right elements in its new summer popcorn movie, DEEP BLUE SEA. Although this movie is rated R for strong foul language and for some gory, scary violence involving shark attacks, it just might put an end to the spate of box-office failures in this genre. Best of all, the strongest, most heroic character in the whole movie turns out to be a Christian, played with panache by rap music star LL Cool J!

The story of DEEP BLUE SEA is mostly set aboard a floating laboratory called Aquatica. In the lab, Dr. Susan McAlester (Saffron Burrows) and her team are experimenting on the brains of three mako sharks to find a cure for mental senility in human beings. According to the movie’s production notes, the mako is a highly prized sporting fish known for its speed and agility, clocking in at more than 60 mph. Unknown to her financial backer, Russell Franklin, played by Samuel L. Jackson (SPHERE and PULP FICTION), Dr. McAlester’s experiments are making the sharks smarter and faster because she has been doing something that violates the scientific procedures of the day. Helping the doctor cut corners is one of the other scientists, played by Stellan Skarsgard of RONIN and GOOD WILL HUNTING. Unwittingly helping her is an expert diver named Carter Blake, played by Thomas Jane. Carter is an ex-con whom Dr. McAlester psychologically blackmails because of his criminal past.

The smartest of the three sharks bites off the arm of one of the scientists and irreparably damages first the lab and then the whole facility. Carter, Franklin, the scientists, and the cook, played by rapper LL Cool J, then must avoid the sharks while climbing and swimming to safety. This, of course, generates lots of exciting action, narrow escapes and more gruesome deaths. It also generates some corny dialogue, but the movie has its tongue firmly planted in its cheek, so it’s better just to sit back and enjoy the excitement of this popcorn movie.

The cook, whose name is Sherman Dudley and who is nicknamed “Preacher,” turns out to be the strongest, most heroic character in the whole movie. He also is a Christian. Sherman shows real cleverness in battling one of the sharks, comes to the rescue several times during the story, compares himself to Daniel in the lion’s den, and prays to God for help while grasping the Cross he wears around his neck. At a crucial, tense moment near the end, he leads several other survivors in a prayer while reciting part of Psalm 23, “The Lord is my shepherd.” Sherman also makes comments like “Death is always useless, Doctor” and “I have loved the pulpit and the bottle. I came up wanting.” Although he sometimes utters a strong or mild obscenity, Sherman’s Christianity also plays an important role in the climax of the battle against the sharks. His character makes DEEP BLUE SEA one of the strongest Christian action movies in quite some time. It’s much stronger even than last year’s ARMAGEDDON (a MOVIEGUIDE® Award winner).

DEEP BLUE SEA has some other positive elements. For example, other characters also refer to God in the story. When Samuel Jackson’s character looks at one of the scientifically enhanced sharks and says, “What in God’s creation is this,” one of the scientists replies, “Not God’s creation. Our creation.” That scientist later becomes one of the shark victims. The movie indicates this is God’s punishment for his sinful ambition to play God. The movie also supports having good ethical practices in science and redeeming yourself by being willing to sacrifice your life for the safety and protection of other people. These things just add theological and moral support to the movie’s strong Christian worldview reflected in the cook’s character.

Regrettably, though, DEEP BLUE SEA includes plenty of R-rated obscenities and profanities and lots of gory, scary action violence. Perhaps much of this could have been toned down, but a movie about monster shark attacks seems predestined to include such objectionable content in order to attract the audience that prefers summer action movies. At least no one is likely to go around committing copycat crimes that imitate the sharks’ behavior in this movie. Just make sure your family’s goldfish don’t see DEEP BLUE SEA.

On the other hand, this movie will plant unwarranted fears in the minds of susceptible children. So, be media-wise: please don’t take your children to DEEP BLUE SEA. If you find yourself tempted to do so, read Dr. Cantor’s excellent book, “MOMMY, I’M SCARED,” first.