"Who Can You Trust?" 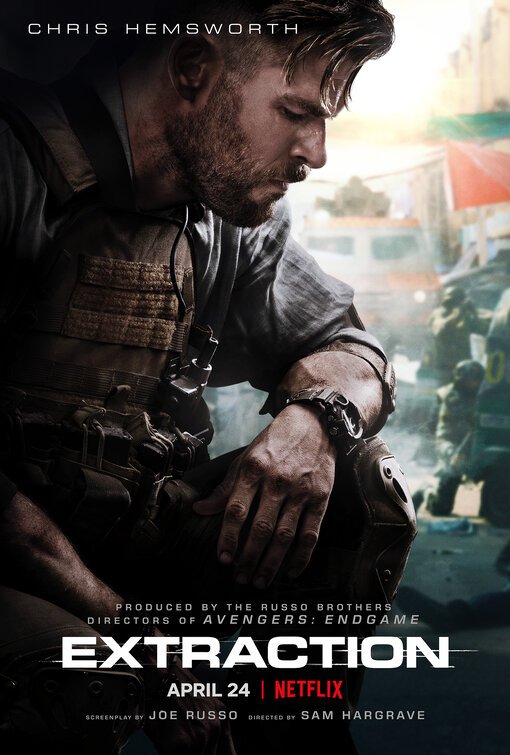 EXTRACTION stars Chris Hemsworth as Tyler Rake, an Australian black-market mercenary with a complicated past. Tyler is hired to rescue the kidnapped son of an imprisoned drug lord in India. Tyler is hesitant at first but ultimately decides to travel to India to help. Tyler easily saves the boy from his kidnappers, but the boy is a hot commodity for other nefarious characters. So, Tyler doesn’t know who he can trust to get the boy to safety. With no one to trust but each other, can Tyler and the boy get out of India alive?

EXTRACTION is written by the producer/writer of the AVENGERS movies and directed by an experienced stuntman for many movies. The action is almost nonstop. Some shots in EXTRACTION are visually appealing. For instance, there are some stunning wide shots and captivating underwater images. EXTRACTION also has a light moral worldview with some light redemptive elements extolling mercy and sacrifice. However, the violence in EXTRACTION is excessively graphic, with lots of killing. EXTRACTION also contains a significant amount of strong foul language. MOVIEGUIDE® advises extreme caution.

(B, C, FR, LLL, VVV, N, AA, DD, M):
Dominant Worldview and Other Worldview Content/Elements:
Light moral worldview with light redemptive elements includes man rescues boy, mercy and sacrifice, plus the Muslim call to prayer shows up in one scene in India
Foul Language:
At least 31 obscenities (mainly “f” and “s” words), three strong profanities, and two characters seek refuge in a fecal-infested sewer
Violence:
Lots of very strong, graphic violence and other violence includes multiple people shot in the head and other places with blood spatter, a child is thrown off the roof of a building, and villains threaten to do it to more children if people don’t comply with their demands, man tells teenager to cut off his fingers, and he eventually does in another scene, children used as soldiers with guns to help grown men satisfy their lust for power, fighting, man kills another man by slicing his jugular, child gets murdered in an alley way as his friend gets kidnapped, child shoots and kills someone who was hurting his protector, and discussions of hunting.
Sex:
No sex but a married couple kisses on the mouth
Nudity:
Upper male nudity in one scene and strip club dancers wear scanty outfits in one quick scene
Alcohol Use:
Children shown at a nightclub with people their age, but it’s not clear if they’re drinking alcohol, and adult male character drinks and gets drunk
Smoking and/or Drug Use and Abuse:
Depicted smoking in a few scenes, no depicted drugs but the whole premise of the movie centers on a crime lord whose son gets kidnapped while he’s in prison; and,
Miscellaneous Immorality:
Corrupt police officers and revenge.

EXTRACTION follows a troubled black-market mercenary who travels to India to rescue a drug lord’s son who’s been kidnapped. EXTRACTION has a light moral worldview with some redemptive elements, but the action violence is constant and too graphic, and the movie contains lots of strong foul language.

EXTRACTION begins on a sort of somber note as a young Indian boy named Ovi leads a life full of isolation and strict rules. Ovi’s father is a major drug lord and in prison for his crimes. Because of this, Ovi’s life is under constant surveillance by both people who want what’s best for him and those who don’t.

After Ovi sneaks out of the house one night to meet up with friends, his father’s enemies kidnap him and kill his friend in an alley. Enter Tyler Rake.

Tyler Rake is an Australian black-market mercenary with a complicated past, but viewers don’t know that just yet. Nik, a female, comes to Tyler with a job: to rescue Ovi and bring him to safety. Tyler is hesitant at first but ultimately decides to travel to India to help.

Once there, Tyler easily finds Ovi with a bag over his head in a small room guarded by armed men. To Tyler’s advantage, his combat skills give him the upper hand, and he defeats them all, some by killing, others by injuring. One Indian child shows up on the scene with a gun, but Tyler shows him mercy and tells him to scatter. Ovi and Tyler take off with the intent to meet Nik and get Ovi to safety.

Still, Ovi is a hot commodity for many. Consequently, Tyler and Ovi don’t know who to trust. At one point, they end up in what they think is a safe location, only for an old friend of Tyler’s, Gaspar, to turn on Ovi and try to convince Tyler that he should just kill the boy. Things, once again, turn violent, and Ovi winds up shooting Gaspar to protect his friend Tyler.

With no one to trust but each other, will Tyler and Ovi come out on the other side of their obstacles?

EXTRACTION is written by the producer of the AVENGERS movies and directed by the stuntman for many movies too. The action is almost nonstop. Some shots in EXTRACTION are visually appealing. For instance, there are some stunning wide shots and captivating underwater cinematography. EXTRACTION also has a light moral worldview with some light redemptive elements extolling mercy and sacrifice.

However, the violence in EXTRACTION is excessively graphic, with lots of killing. EXTRACTION also contains a significant amount of strong foul language.