"One Sin Can Ruin Your Life" 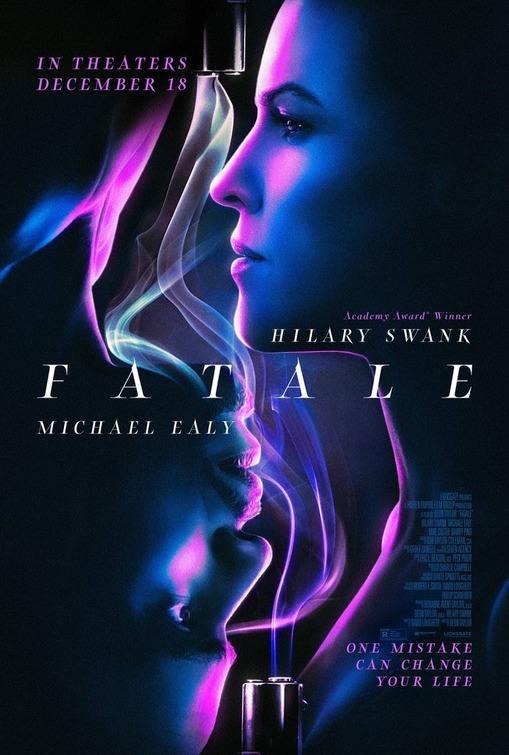 FATALE is a modern thriller that’s a throwback to classic film noirs about a relatively, but not completely, innocent man trapped by feminine wiles. Derrick is a black sports agent running a successful Seattle agency for professional athletes with his partner and friend, Rafe. Suspecting his wife of adultery, Derrick has a one-night stand in Vegas with Valerie, a seductive white woman. When someone tries to kill him at his home one evening, the police detective given the case turns out to be Valerie. As Valerie investigates the case, she comes up with a plan to frame Derrick for murder. It’s part of a crazy scheme to regain custody of her daughter from her ex-husband.

FATALE has some suspenseful, thrilling moments, with decent acting. Eventually, the story becomes far-fetched. Also, the soundtrack is sometimes annoying. FATALE has a light moral worldview. David and his wife get a lesson about not committing adultery. Derrick also gains a new respect for justice and freedom. Despite this positive content, FATALE has lots of strong gratuitous foul language, plus illicit affairs, political correctness and intense, bloody violence.

(B, P, PC, AP, LLL, VV, SS, NN, AA, MM):
Dominant Worldview and Other Worldview Content/Elements:
Light moral worldview about seeking justice, with a cautionary tale about adultery and lust, with some politically correct elements concerning the plot, which involves a white police detective framing a black man for murder, for personal reasons of her own having nothing to do with race, however
Foul Language:
66 obscenities (half or more are “f” words), one Jesus profanity, three light profanities, two “n” words
Violence:
Intense fight between an armed and masked home invader with the homeowner, home invader has a gun, and there is a struggle over the gun, two shots are fired into a ceiling and into a wall, homeowner has wounds on his face from the attack, image of murdered unmarried couple with blood around them, man accidentally shot dead in another struggle over a gun, police detective shoots two men dead after they try to kill her, a gunfight occurs with two people getting shot
Sex:
Depicted adultery in two scenes, implied adultery in another scene, partially depicted marital sex in a separate scene, man with binoculars sees his wife meeting and kissing his business partner, man with gun finds his wife and business partner in bed, but he just drops his wedding ring and leaves
Nudity:
Partial rear female nudity during one sex scene, and several images of upper male nudity
Alcohol Use:
Alcohol use, implied drunkenness, and a major character has had a drinking problem in the past
Smoking and/or Drug Use and Abuse:
No smoking or drugs; and,
Miscellaneous Immorality:
Hero is framed for murder, and married couple has marital problems that aren’t resolve in a positive way.

FATALE is about a black sports agent for professional athletes who runs afoul of a white female police detective who uses him and his cheating wife to frame him for murder and gain custody of her own child. As a modern film noir, FATALE has a few thrilling moments, with some decent acting, but the story is too far-fetched, the soundtrack is sometimes annoying, and the movie has lots of gratuitous foul language plus illicit affairs, political correctness and intense, bloody violence.

Michael Ealy plays Derrick, a black sports agent who runs a successful agency in Seattle for professional athletes with his partner and friend, Rafe. However, Derrick thinks his wife, Tracie, is cheating on him. He and Rafe are scheduled to attend a big client’s birthday party in Las Vegas. Rafe advises Derrick to have some extramarital fun in Vegas to take the edge off his marital woes.

At the party in Vegas, which is at a nightclub, Derrick wanders around the club. He’s clearly conflicted as he watches many couples having fun dancing. He spies a beautiful white woman, played by Hilary swank, dancing in the crowd. He takes off his wedding ring as she approaches him at the bar. The woman is very friendly. She introduces herself as Valerie, and Derrick introduces himself as Darrin.

On the dance floor, Valerie is very sensual, and Derrick responds in kind. Soon, they are back in his hotel room, where they engage in illicit activity. In the morning, they go their separate ways.

Back in Seattle, Derrick and his wife, Tracie, are very amorous toward one another one evening. However, their marital romance is interrupted by a noise in the kitchen. Taking a bat with him, Derrick goes to investigate. Suddenly, a masked man with a gun jumps him. The gun goes off a couple times, just missing Derrick. He manages to pry the gun from the intruder, and the man leaves, but Derrick suffers a couple facial wounds and bruises during the fight.

Derrick and Tracie call the police. The police briefly investigate the scene and ask some questions, but wait for the detective to appear. The detective assigned to the case just happens to be Valerie, the woman from Vegas.

Having discovered Derrick’s true identity, Valerie is hostile and more than a little suspicious about what’s really happening in Derrick’s life. Nothing was really taken from the home. Also, it looks to her like the intruder was there to kill Derrick. Valerie’s hostile, suspicious attitude makes Derrick very nervous.

Shortly thereafter, Valerie’s investigation reveals that Derrick’s wife is indeed having an affair of her own. She also discovers that the affair is with Derrick’s business partner, Rafe. With Derrick out of the way, Rafe could have both the sports agency and Derrick’s wife. She shows this evidence to Derrick by taking him to a nearby beach. On the beach, she lets Derrick look through binoculars to see Rafe and his wife secretly meeting one another at Rafe’s place nearby.

Valerie mentions to Derick her suspicions that Rafe was the masked intruder who tried to kill him the other night. She admonishes him, however, not to do anything until he hears from her again.

Derrick clearly has problems with his family life, but Valerie’s family life isn’t pristine either. Several years ago, her husband divorced her when Valerie got drunk one night and passed out on the bed. Their young daughter got her hands on Valerie’s gun and almost killed herself. As a result of Valerie’s drinking problem, she lost all custody of her daughter to her husband, a city official who’s now having legal problems of his own. In one scene, Valerie goes to her husband and tells him she’s stopped drinking, straightened her life around and now wants joint custody or visitation rights. The husband says no way.

[POSSIBLE SPOILERS FOLLOW] A day or two after Valerie reveals Tracie’s affair with Rafe to Derrick, Rafe and Tracie turn up shot dead in Rafe’s apartment. Suspicion, of course, immediately lights on Derrick. The movie keeps viewers in the dark for a moment about whether Derrick murdered them, because his wedding ring was found at the crime scene. It turns out, however, that Valerie killed them and now wants Derrick to do a favor for her. Her blackmail is all part of a plan for her to get custody of her daughter from her husband.

FATALE has some suspenseful, thrilling moments. For example, the scene with the intruder comes out of the blue and gives the plot a real shot in the arm, so to speak. Eventually, however, the story becomes a bit far-fetched. As a result, some, or many, viewers may have a few questions about the movie’s plot details, perhaps even some questions about the characters and their actions and motivations. For example, it strains credulity that Rafe and Tracie thought they could get away with killing Derrick even if it did look like a home invasion at first. After all, the masked home invader doesn’t take anything from the house to steer suspicion away from them. Also, it’s amazing that Valerie still has a job with the police after her daughter got hold of her weapon. Even then, however, if a recovering alcoholic can show to the family court that they’ve become sober for a certain period of several years, he or she should be able to at least get some visitation rights sooner rather than later. The plot really breaks down at one point toward the end when Derrick tries to do the right thing, but ends up accidentally hurting someone. His attempt to do the right thing seems pretty stupid and awkwardly done, and the person’s reaction to him seems pretty stupid too. After this incident, Derrick suddenly becomes very smart as the story comes to its climax and resolution. It’s hard to sympathize with a stupid person unless it’s a comedy. It’s even harder when the person is smart, then stupid, then smart, then stupid again, then smart again.

Another issue with the movie is the soundtrack. Instead of inserting suspenseful, dramatic incidental music into their movie, the filmmakers use jazzy, soulful urban pop tunes. The music just doesn’t fit the story and smacks of stereotypical cliché. As a result, it’s sometimes annoying and silly.

FATALE has a light moral worldview. Embedded in the story is a lesson about not cheating on your spouse. You never what the spouse might do. They might kill you, not just divorce you. Also, when Derrick is framed for murder, and the frame is exposed, the story becomes an example of trying to achieve justice for an innocent victim, even if the victim is sometimes stupid. Despite this positive content, FATALE has lots of strong gratuitous foul language and intense violence. It also shows a few steamy, illicit affairs and a brief bedroom scene between a married couple. Finally, FATALE has a little bit of political correctness surrounding its story of a white police detective framing a black man for murder. The political correctness isn’t really strong or self-righteous, but it’s there.

All in all, MOVIEGUIDE® advises extreme caution for the objectionable content in this contemporary attempt to update a classic thriller genre.