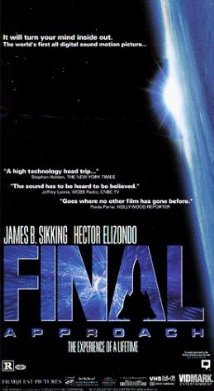 FINAL APPROACH boasts the first all-digital soundtrack in a full-length film, and, in a properly equipped theater, is spectacular to hear. However, great sound by itself isn't enough to salvage this pretentious and tedious non-story about an amnesic pilot about to enter a quasi-mystical afterlife. Even dedicated audiophiles will be bored to tears.

FINAL APPROACH is the first feature film boasting a digital sound track. However, this serves only as a diversion in a stupefying non-story. The film opens as pilot Jason Halsey whips an SR-71 Blackbird through Monument Valley, until, suddenly, the plane is struck by lightning. We next see Halsey sitting in a waiting room. He enters the office of Dr. Dio Gottlieb who begins a stream of questions. Halsey cannot remember who he is, nor can he figure out what is happening. The only relief from Halsey’s frustration with this claustrophobic setup comes in the form of several flashback/free association sequences. Finally, Halsey learns the BIG SECRET: The office is a waiting room for the afterlife, and Gottlieb (German for “God lover”) is supposed to get Halsey prepared.

Of course, the theology here is beyond murky (God is an “intelligence” conducting experiments on a huge petri dish called Earth), so Halsey without further ado strides out of the office into a blinding light. At least he wasn’t shown being reincarnated. Thus, FINAL APPROACH wastes a sensational achievement in sound reproduction on truly mediocre and unsatisfying material.