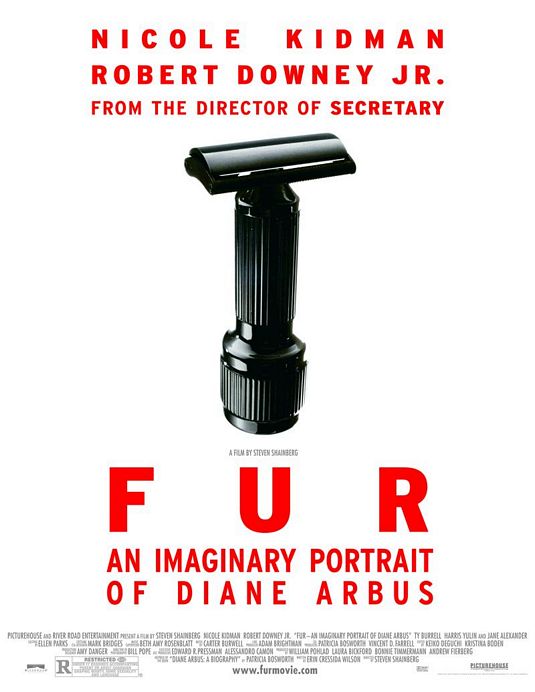 FUR: AN IMAGINARY PORTRAIT OF DIANE ARBUS is a fictional look at the 20th century photo-artist (played by Nicole Kidman) and her enigmatic new neighbor, Lionel. In the story, everyone misunderstands Diane, including her upper-class parents, husband and daughters. Then, her mysterious new neighbor, Lionel, moves into the apartment upstairs. Lionel (played by Robert Downey, Jr) always wears a mask in public. He captivates Diane's imagination. Diane learns that Lionel suffers from a disease that covers his face and body with hair. Diane begins a friendly relationship with Lionel. In the process, she gains a friend, and, eventually, an illicit lover. Thus, Lionel drastically changes her life and launches her career as the artist she was always meant to be.

Merely inspired by a biography by Patricia Bosworth, FUR: AN IMAGINARY PORTRAIT OF DIANE ARBUS moves completely away from the famed artist's biography and instead takes a fantasy voyage. Imagination is where this movie should have stayed. The movie is not only plot-less and boring to the point of inducing sleep; it is also filled with excessive nudity and sexuality and extols adultery. Thus, FUR is artistically and morally abhorrent.

(RoRoRo, PaPa, LL, SSS, NNN, AA, DDD, MM) Very strong Romantic worldview where characters make choices based on emotion, with strong, immoral pagan choices, including adultery; four obscenities (three of which are "f" words) and three profanities; one sequence of very mild violence includes woman sees a film reel playing where a carnival dog-man is chained to the wall; excessive sexual content includes one scene of depicted “rough” sex between a married couple, a woman opens her blouse on the back porch so that a neighbor will see her, two unmarried characters have a graphic sexual discussion of what fantasies the woman had when she was a little girl, and a scene of depicted adultery; excessive nudity includes a woman walks through a nudist colony where there is a lot of full frontal female and full frontal male nudity, several shots of female cleavage, rear female nudity, rear male nudity, naturalistic upper male nudity and side female nudity in a sexual context; alcohol consumption depicted in several party sequences, mostly champagne and beer; smoking depicted throughout the movie and two scenes with depicted drug use; and, miscellaneous immorality includes woman lies to her husband throughout the movie.

FUR: AN IMAGINARY PORTRAIT OF DIANE ARBUS is a fictional look at the 20th century photo-artist (played by Nicole Kidman) and her enigmatic new neighbor, Lionel (played by Robert Downey, Jr), who changes her life and launches her as the artist she was always meant to be.

That is, until a new neighbor moves in upstairs. The mysterious Lionel, who always wears a mask in public, captures Diane’s attention and captivates her imagination. She soon discovers the reason why Lionel wears a mask. He suffers from a disease that has covered his body in hair. His appearance is that of a wolf-man, a physical oddity that a person might see at a sideshow.

Even though his outward appearance would be frightening to some, Diane faces her fears so that she might photograph this mysterious man. Lionel’s look on life intrigues Diane. Soon she finds that she would rather be with the wolf-man upstairs than with her husband and children downstairs. Even though she starts the relationship by wanting to take his picture, she gains more than just a photograph. She gains a friend and, eventually, an illicit lover.

Merely inspired by Patricia Bosworth’s book, “Diane Arbus: A Biography,” FUR: AN IMAGINARY PORTRAIT OF DIANE ARBUS moves completely away from the biography of the famed artist and instead takes a fantasy voyage on what circumstances could have made her into the artist she became. The movie proclaims at the beginning, “This is not a historical biography.” It goes on to say that “in tribute” to the artist, this movie “invents characters and situations that reach beyond reality to express what might have been Arbus’ inner experience on her extraordinary path”; hence, the “IMAGINARY” part of the title.

Imagination is where this movie should have stayed. The movie creators’ own imaginations obviously need some biblical sanctification. Not only is FUR plot-less and boring to the point of inducing sleep, it is also filled with excessive nudity and sexuality. Not to mention the fact that the movie’s immoral notion extolling adultery as love, as opposed to being committed to one’s marriage and children, is extremely dangerous and profane.

This movie is not worth the film on which it was printed. The director, whose previous work includes the equally detestable movie, SECRETARY, tries too hard to make an “artsy” film. However, this piece falls so short of that mark that the subsequent thud is almost audible as the movie crashes to the ground.

This movie also does no justice to the story of Diane Arbus. Nor does this “imaginary portrait” provide “tribute” to her artistic legacy. Audiences, in general, should avoid this movie because it is a complete waste of money and time. Also, because of the movie’s graphic nudity, gratuitous sex and promotion of adultery, media-wise people of faith should avoid this movie as well.