"Love’s Not a Betting Game" 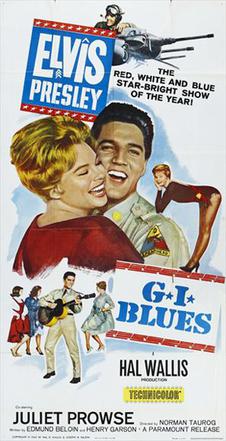 G.I. BLUES is a 1960 Elvis Presley movie about an American soldier in Germany with a southern Casanova personality, an aspiring musician’s talent and the self-confidence to support it. Tulsa dreams of running his own nightclub in Oklahoma with his pals. In Germany, he overhears some fellow soldiers and decides to place a bet on his friend Dynamite that he can win the heart of an unattainable nightclub dancer named Lili. However, when Dynamite is reassigned to Alaska, Tulsa replaces him in the bet. The bet is for Tulsa to spend a night alone with Lili at her apartment.

G.I. BLUES is an entertaining musical with comical elements and some positive pro-family moments, including two sweet scenes featuring children and a baby. Eventually, Tulsa comes to see Lili as more than a woman to fulfill a bet but as someone for whom he cares. G.I. BLUES promotes family, friendship and doing the right thing. However, it’s marred by loose talk by men about women and suggestive dance routines by Presley’s co-star, Juliet Prowse. So, MOVIEGUIDE® advises strong caution for older children and teenagers.

(B, CapCap, Pa, V, S, N, A D, M):
Dominant Worldview and Other Worldview Content/Elements:
Light moral worldview supports family, friendship and doing the right thing even if it doesn’t benefit you, plus some pro-capitalist elements where soldier talks repeatedly about opening nightclub with his buddies back in America, but movie is marred by pagan lust of soldiers who talk sinfully and carelessly about women and sex
Foul Language:
No foul language, but there’s some dialogue that’s demeaning toward woman
Violence:
Light violence includes a tank fight, and men fight in a bar
Sex:
Suggestive talk by men about women and sex, woman dressed in tights does two suggestive dance routines in nightclub, guy tries to stay at a woman’s place overnight to win a bet, movie shows men chasing women for pleasure, men and women kiss repeatedly
Nudity:
Brief upper male nudity while they are showering
Alcohol Use:
Light alcohol use people drink in tavern, woman pours man a drink
Smoking and/or Drug Use and Abuse:
Light smoking man light cigarette for woman, man smokes in train station; and,
Miscellaneous Immorality:
Light miscellaneous immorality includes a dysfunctional relationship woman doesn’t tell man about their child, man lies to woman, and men gamble to see who can stay overnight in woman’s apartment.

Set in 1960 West Germany, G.I. BLUES stars Elvis Presley as tank crewman Tulsa McLean as he tries to put to together the funds so he and his band buddies can open their own nightclub in Oklahoma. Tulsa and his unit are reassigned to Germany while at the train station Tulsa overhears other soldiers make a bet to see if one soldier, Dynamite, can get Lili, a high society showroom dancer, to spend a night with him. He hears this and decides to bet on Dynamite, a notorious ladies’ man. Before the bet’s complete, however, Dynamite is reassigned to Alaska. Tulsa’s buddies try to get him to take Dynamite’s place. At first, Tulsa refuses, but they convince him.

At the club where Lili dances, Lili is unimpressed in her first encounter with Tulsa, until she needs his aid to get away from one of the establishment’s regulars. This leads Tulsa and Lili to get to know each other better as she invites him back to her house for a sandwich and apple strudel. By the time they get to Lili’s place after getting the strudel, however, they’re greeted by Cooky, Tulsa’s band mate, who is making time with Tina, the pretty waitress from Lili’s nightclub, who just happens to be Lili’s roommate from Italy. This leaves Tulsa to have to come back on another night because he and Lili are unable to be alone as the bet requires.

The next day, Tulsa and Lili spend a day together seeing some of the sights in Frankfurt. In one sequence, Tulsa ends up singing a very cute, pretty song to a puppet in front of some children. Based on a German folk tune, the song, “Wooden Heart,” became a major hit for Elvis. By the end of the day, Tulsa decides he really likes Lili and doesn’t want to go through with the bet.

Later that night, at the nightclub, Tulsa tells Lili it’s best if they stop seeing one another, since he’s only temporarily assigned to Frankfurt, and he doesn’t want someone’s heart to be broken. Lili is clearly disappointed in Tulsa’s decision, but she privately tells Cooky that she admires Tulsa’s maturity. Later that night, a plot twist occurs that bring Tulsa and Lili back together. Are they meant to be together? What if Lili finds out about the bet?

G.I. BLUES is an entertaining Cold War musical comedy. The movie stars Elvis Presley and Juliet Prowse as the leads. Both play off each other though Juliet takes the lead in professional skill. The majority of the film was shot onsite in Germany, which lends a lot to the movie’s atmosphere and authenticity, though some shots are done with back projection.

G.I. BLUES has some positive pro-family moments, including two sweet scenes featuring children and a baby, as well as friendship, doing what’s right, and going after you dreams though some trickery is used. G.I. BLUES does, however, romanticize womanizers with no real condemnation of such behavior. There are also references to men tallying the number of their female conquests. Also, Presley’s co-star, Juliet Prowse, performs two suggestive dances at the nightclub. MOVIEGUIDE® advises caution for older children because of innate/underlying sexually suggestive tone.