YES, I WANT TO SUPPORT MOVIEGUIDE®!
Search
Home
ReviewsNew on Streaming and DVD 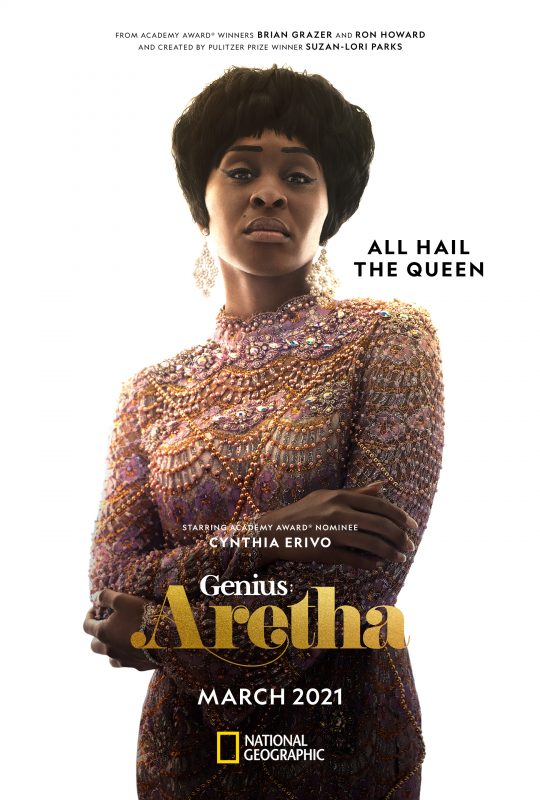 ARETHA, in the National Geographic Channel’s GENIUS series episode entitled “Respect,” covers singer Aretha Franklin’s childhood and her breakthrough to success. The episode portrays her relationship with her preacher father from young girl to adulthood. It also details her tumultuous marriage to her manger/husband Ted White and her introduction to music producer Jerry Wexler. It ends at a concert in Chicago, where she’s crowned “the Queen of Soul.”

This episode of the GENIUS series on the National Geographic Channel has wonderful gospel singing and preaching. At the same time, it tells all the family dysfunction and the pain involved in trying to succeed in the area of music, especially soul music, which is a new genre. Aretha wants her life to be portrayed as positive and holds on to the Gospel teaching, but around her, people are drinking, smoking dope, having fights, and using foul language. The viewer’s heart goes out to Aretha. Cynthia Erivo, who played Harriet Tubman in the movie HARRIET, does a wonderful job becoming Aretha Franklin. MOVEGUIDE® advises caution for older children for the ARETHA television episode titled “Respect.”

(CC, Pa, L, V, S, AA, DD, M):
Dominant Worldview and Other Worldview Content/Elements:
Strong Christian focus with marital problems and other worldly aspects, lots of Christian songs, strong Christian teaching regrettably preacher parties hard on Saturday and preaches hard on Sunday, preacher has several girlfriends, Aretha Franklin’s husband is unfaithful, some references to racism with white people threatening preacher, but also with Aretha and her husband getting angry at white people
Foul Language:
Seven obscenities and two light profanities
Violence:
White Southern men in truck threaten preacher and his little daughter changing a flat tire on a lonely southern road and use a baseball bat to bash in the car window, Aretha’s husband gets into a fight with a white manager and trashes their hotel room, Aretha’ husband hits her and gives her a black eye before her big performance
Sex:
Some kissing but lots of discussion of marital infidelity, preacher’s girlfriend whom little Aretha loves leaves Aretha’s preacher father because he’s got a bimbo hanging on to himm and Aretha gets angry at husband for spending the night out, getting drunk and committing adultery
Nudity:
No nudity
Alcohol Use:
Party at preacher’s home with lots of alcohol and marijuana, preacher drinks alcohol but refuses marijuana, other people get drunk during the episode
Smoking and/or Drug Use and Abuse:
Aretha chain smokes the whole program, and people are smoking marijuana at a party but Aretha’s preacher father refuses it; and,
Miscellaneous Immorality:
Divorce, sisters envy Aretha, and husband does not like white musicians talking to Aretha.

ARETHA, in the National Geographic Channel’s GENIUS series episode entitled “Respect,” covers singer Aretha Franklin’s childhood and her breakthrough to success with an insightful program that includes great preaching, great singing and marital infidelity. Structured like a movie, the “Respect” episode of ARETHA is fascinating and especially interesting because of the music, some of which was supervised by the great Hans Zimmer.

“Respect” opens with Aretha singing on stage with her two sisters singing backup, and then she is grilled by the press about her children and her marriage. Aretha denies all the press questions and wants to present her life as Christian as possible or, as someone says, as a fairytale.

Cut to Alabama in 1967 when Aretha is traveling with her husband, Ted, to Muscle Shoals for a recording session with the famous Mr. Wexler at the FAME Studio. None of her other recording sessions have panned out for her.

Cut to 1954 when Aretha and her preacher father, Pastor Franklin, are driving on a lonely road in Alabama when their Oldsmobile gets a flat tire. Two rednecks stop their truck and take out a baseball bat to attack the preacher. One of them bashes the rear window of the car, where little Aretha is sitting in the back. Pastor Franklin says, “Would you like my car,” and gives them their car, leaving him and Aretha to carry their bags to the next town, where they buy a new car with cash. The owner of the car lot asks, “Where’d you get so much money,” and Pastor Franklin says, “I’m a preacher, and God is good.”

Back at the Muscle Shoals recording, Aretha and her husband, Ted, come in to find out that all the backup musicians are white. Aretha doesn’t think they can play soul music, and, sure enough, after 44 rejected takes, it seems like they may not be able to keep up with her. She is a musical prodigy, a genius, as the series says.

Back at Detroit in 1953, Pastor Franklin is preaching up a storm with a sermon “don’t trust in a bank account…don’t trust in the government”, and various other don’ts . All of those will pass, he says. “Trust in the Lord,” he advises, and all the congregation enthusiastically cries out, “Amen!” Aretha’s father has little Aretha come up to sing. She starts off hesitant but then becomes the mighty musical prodigy that stuns the church.

It is noted that Aretha’s preacher father preaches hard on Sunday and parties hard on Saturday night. On Saturday night, his house is filled with people drinking and even smoking weed. Aretha is sitting on the front steps, and he tells her to come on down. She sits next to his girlfriend, whom she loves and who seems sensible. Pastor Franklin mentions that Aretha sings, and Ted says, is this a parlor trick. When Aretha sings in a duet with a known black singer, everybody is amazed.

Cut to the recording session years later. Ted, who is now her husband and her manager, gets upset that one of the white musicians are talking to Aretha. He forces their manager to fire him. When Aretha and Ted return to the motel, the other manager and Ted have a knockdown, drag out fight.

Aretha goes home to Detroit, where her father has a new girlfriend, and she has three sons being raised by her family. A very sensible woman manager named Ruth offers to help Aretha with her career. She gets Aretha a big concert in Chicago, where she tells Ted she’s going to divorce him after he gives her a black eye. When she sings, with her sisters as backup, she is named the Queen of Soul.

This episode of the GENIUS series on the NATIONAL GEOGRAPHIC Channel has wonderful gospel singing and preaching while at the same time exposing all the family dysfunction and the pain involved in trying to succeed in the area of music, especially soul music, which is a new genre. Aretha wants her life to be portrayed as positive and holds on to the Gospel teaching, but around her, people are drinking, smoking dope, having fights, and using some foul language. The audience’s heart goes out to Aretha.

Cynthia Erivo, who played Harriet Tubman in the movie HARRIET, does a wonderful job becoming Aretha Franklin. Aretha’s biggest flaw is that she fell for Ted when she was a young girl, and he used her and abused her. She chain smokes throughout the episode.

There will be several movies about Aretha Franklin coming out in the near future. A theatrical movie version with Jennifer Hudson is being promoted to Christians. Having been a Broadway brat when my father starred on Broadway, I got to see several of these musicians, such as Louis Armstrong, Aretha, Fats Domino, or Ornette Coleman, who became a good friend, and many others when they were just trying to eke out a living in New York City.

The ARETHA series has been commended and is up for an Emmy Award, but one or two reviewers have criticized how it shows the underside of Aretha’s life. Having grown up in that milieu, however, it’s refreshing to see some honesty in the complexity about trying to be a musician, actor or artist in a very difficult theatrical world.