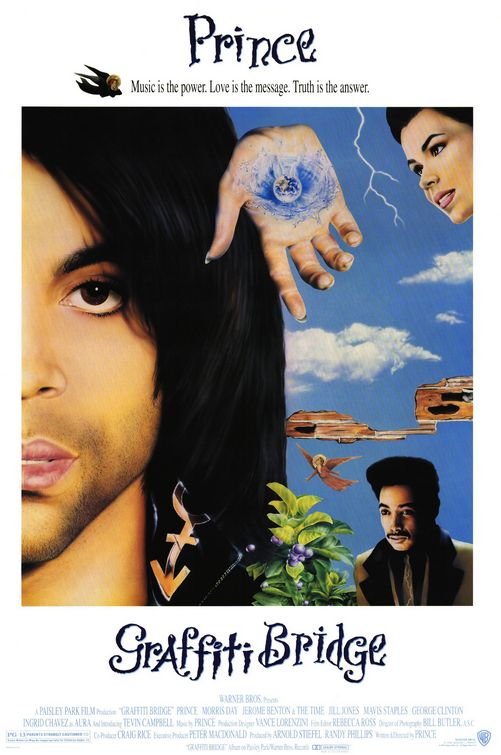 Prince wrote, directed, acts, dances, and has written some eighteen new songs in this story about power struggles in a Minneapolis night club. It’s a loser all the way around.

Without much of a story line or plot, Prince stars as the Kid, a musician who is willed half-ownership of a Seven Corners nightclub named Glam Slam. Kid’s “spiritual noise” music is opposed by Morris Day, a comic satyr and the club’s co-owner. “This kind of music will never change anybody,” says Morris, who also owns several of the other joints in town.

The movie meanders for another hour or so, from one disconnected, neon-lit scene to the next. There are only so many ways to shoot the inside of a bar, and the camera exhausts them all before the first yawn is finished. Dance numbers are lewd and the songs meaningless, although some of the lyrics contain lines such as, “Looking for a savior in a city of fools,” “Strip down,” and “Thieves in the temple.”

Kid eventually hooks up with a mysterious female writer who seemingly has conversations with heaven in which she says things like, “Whatever you ask of me, I will do.” Kid intimates, “Are you mine?” “No,” she says, pointing upward… “His.” It’s never mentioned who “he” is, but the spiritual ramblings continue until her character is eliminated by a hit-and-run driver.

Kid challenges Morris to a battle for the club by seeing whose group and musical number can be the “bad-est.” Morris wins, and then proceeds to take over the Melody Cool club, but owner Melody sings and performs her own number to protect her turf. Finally, Morris concedes and reconciles with Kid.

While the story line for GRAFFITI BRIDGE is all over the map, there are some subtle New Age influences that Christians should note, such as one neon sign that flashes, “Man will be ruler.” Prince himself says, “When I talk about God, I don’t mean some dude in a cape and beard coming down to Earth. To me, he’s in everything if you look at it that way.”

In the film, Prince is androgynous as ever, dancing in high heels and wearing jewelry that combines the male and female gender symbols. The outcome of such a lifestyle is obvious, and this metaphysical movie is riddled with it: sexual immorality and lewdness, fornication, drunkenness, and obscenity. Perhaps most unfortunate is that Prince has also said, “There’s nothing a critic can tell me that I can learn from.”